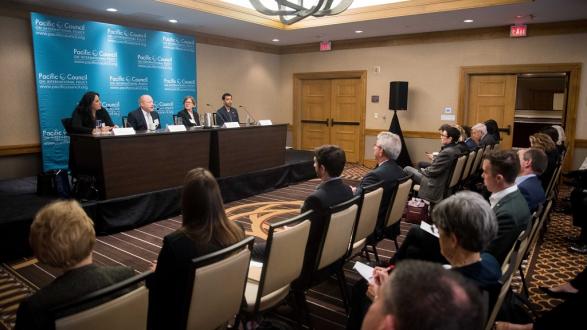 The Pacific Council has been leading the foreign affairs conversation on the West Coast since 1995.

Learn more about members, our staff, and our Board of Directors.

Founded in cooperation with the Council on Foreign Relations (CFR) in New York and the University of Southern California (USC) in Los Angeles, the Pacific Council emerged at a time when the world was becoming increasingly interconnected. The Council’s founders believed that the West Coast, not just the D.C.-New York corridor, had an important role to play in grappling with global issues and developing improved U.S. foreign policy.

By building the Pacific Council as a membership organization, they aimed to reframe U.S. foreign policy as a concern not only for foreign policy practitioners, but also leaders from sectors like business, media, politics, academia, and law.

Civic leaders in Los Angeles worked to make the Pacific Council a reality. Founding President Abraham F. Lowenthal, then a Professor in the School of International Relations at USC, gained the support of Robert Erburu, Chairman of the Times Mirror Company; John Bryson, head of Edison International; and Steven Sample, President at USC.

Since 1995, the Pacific Council has hosted exchanges on issues of international importance, convened experts and working groups to address pressing policy challenges, and built a network of globally-minded members across the West Coast and the world. Today the Pacific Council’s roster includes current and former diplomats, industry leaders, media representatives, politicians, and scholars.

Reports on Global Affairs from Pacific Council Experts Over the Years

Since our founding in 1995, the Pacific Council has published a variety of reports and commentary on important global issues. Below are examples of our previous work.

A Matter of Time: To Propel the Guantánamo Cases Toward Trial, Send in Federal Judges with the Authority to Enforce Scheduling Orders – September 2018

Building Bridges from Seoul to Los Angeles: SeouLA Report – May 2017

Up to Speed: To Fairly and Transparently Expedite the Guantánamo Trials, Put Federal Judges in Charge – February 2016

The Asia-Pacific Region in a Time of Insecurity: Implications for Public Policy and the Private Sector – February 2004, Daniel C. Lynch, Rapporteur

A Tale of Five Regions: Meeting the Challenge of Globalization in the U.S. West – June 2003, Gregory F. Treverton

Boeing and Beyond: Seattle in the Global Economy – January 2003, Frederic A. Morris

Globalization in the San Francisco Bay Area: Trying to Stay at the Head of the Class – January 2003, S. L. Bachman

Roadmap for E-Government in the Developing World: 10 Questions E-Government Leaders Should Ask Themselves – April 2002

The Reshaping of Korea – November 2001

Check out photos of our delegations and events on our Flickr page.