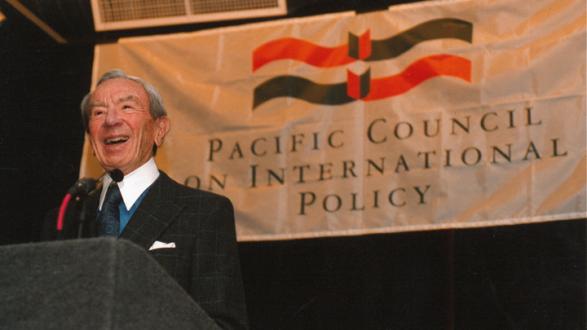 Described by President Bill Clinton as a man who had "the stamina, steel and judgment to accomplish things that were truly extraordinary,” Warren Christopher was an exemplary public servant. His distinguished career spanned service as a young Naval officer, an attorney at O'Melveny and Myers, the nation's top diplomat (U.S. Secretary of State), and the head of what came to be called the Christopher Commission in the wake of the Rodney King incident. As Deputy Secretary of State, he was awarded the Medal of Freedom—the nation's highest civilian award—by President Jimmy Carter on January 16, 1981 for his role in negotiating the release of 52 American hostages held in Iran for 444 days.

The Christopher Award is presented to those who demonstrate commitment to international and domestic affairs, to the highest ethical standards, to promotion of the common good, to equality and fairness, and to government service as a noble pursuit.

In 2016, Mary Robinson, the first woman president of Ireland (1990-1997) and the former United Nations High Commissioner for Human Rights (1997-2002), became the second recipient of the award. Read about and watch the highlights of her acceptance speech.

In 2020, Madeleine Albright, the former first female U.S. Secretary of State (1997-2001), became the third recipient of the award during the Pacific Council's 2020 Global Summit: Beyond the Horizon. Watch the highlights of her acceptance speech.

Board of Directors
President & CEO