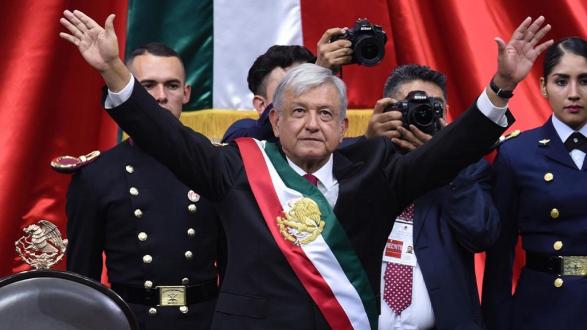 In July 2019, a delegation of Pacific Council members traveled to Mexico City for meetings with government, business, civic, and social enterprise leaders. As part of the Council’s Mexico Initiative, the delegation was designed to promote better understanding of the shared priorities and ongoing challenges in the U.S.-Mexico relationship.

The discussions covered a range of issues—the bilateral relationship on a national and subnational level, the first six months of the AMLO administration, the Mexican economy and social sector entrepreneurship, and security and migration concerns. The delegation was led by Patrick Schaefer, Pacific Council member and director of the Hunt Institute for Global Competitiveness at the University of Texas, El Paso.

Below are some of the key takeaways from the delegation:

A common thread through several discussions was that negative rhetoric about the U.S.-Mexico relationship at the federal level does not reflect the full picture of a largely positive and interdependent relationship, spanning from national ties to personal connections. Representatives from both the U.S. and Mexican government shared that the two nations remain in close connectivity and cooperation over several challenging issues: migration, security, economic issues, and border management.

At the macro level, the United States and Mexico remain closely economically tied. One speaker cited that 80 percent of Mexican exports go to the United States and Mexico has been the United States’ number one trading partner in aggregate for the last five months. Several states—California included—rely on closely interdependent trading relationships with Mexico as well. One speaker shared the example of San Diego and Tijuana as an experience in creating a binational community, with a binational airport terminal and over 100,000 border crossings daily between the two cities each day for work, school, and tourism.

The example of San Diego and Tijuana’s binational community exemplifies how cross-border ties penetrate a social level as well. About 1.5 million Americans live in Mexico, and one speaker speculated that their personal and community connections often act as “shock absorbers” to help maintain the relationship in the long term when there is immediate-term volatility.

At the time of our visit in July, recently elected Mexican President Andrés Manuel López Obrador (AMLO) had just completed his first six months in office. López Obrador won a landslide victory in 2018, collecting over 30 million votes and a 30 percent victory over his nearest rival after running on a leftwing, nationalist platform. Delegates heard varied takes on his successes and shortcomings as he settled into office.

In sharing cases for optimism on the AMLO administration, multiple speakers pointed out that, despite anticipated clashes, overall President López Obrador has taken a pragmatic approach to his relationship with U.S. President Trump and shown an ongoing desire to maintain good relations with the United States.

Others pointed to quickly-executed austerity measures—reducing salaries for government officials, selling the presidential plane, declining to travel internationally—and his daily press conferences as means to generate public goodwill and offer more accountability at the presidential level. One expert speculated that these goodwill measures, in addition to his attentiveness to marginalized communities, would grant him a longer runway to make change on some of Mexico’s more intractable issues such as corruption and security.

Conversely, several speakers shared concerns about the administration’s approach to Mexico’s ongoing economic and security challenges. While one of AMLO’s campaign promises was to double the pace of economic growth, growth slowed both in the last quarter of 2018 and the first of 2019. The administration has introduced several “mega-projects” and is focused on investments for development to meet this goal, including the Tren Maya, a tourist train for southeast Mexico, and plans to build two new oil refineries.

But as one expert pointed out, the administration’s impatience with the process of bureaucracy may pose a problem for Obrador in the long run. The administration’s desire to expedite these projects has already created vast public outcry from a myriad of stakeholders in the private sector, environmentalists, and regional indigenous communities and could lead to ongoing complications.

Another common thread throughout the delegation was concerns over violence and national security. Several speakers pointed out that the homicide rate in Mexico has continued to increase in 2019, with a major portion of these crimes (estimates between one third and one half) attributed to organized crime, though the rate of acceleration has recently decreased.

One particular challenge has been the shifting cartel landscape. In the last decade, cartels have balkanized, evolving from relatively clear geographic boundaries and hierarchies to being more dispersed, often operating in smaller subgroups with less firmly geographically defined areas.

The press has been hit particularly hard by ongoing organized violence, as journalists covering crime, security, justice issues, corruption, and politics are increasingly under threat. There are now states in Mexico that are effectively “silent states” where virtually no reporting is happening.

The press has been hit particularly hard by ongoing organized violence, as journalists covering crime, security, justice issues, corruption, and politics are increasingly under threat. Representatives from foreign publications in Mexico pointed out that, while they typically have some security from their U.S. mastheads, there are now states in Mexico—Veracruz, Tamaulipas, Guerrero, and Chihuahua—that are effectively “silent states” where virtually no reporting is happening because of prior targeted killings and the ongoing threat of violence.

In response to this, in February Mexico’s Congress approved the creation of a 60,000-member National Guard designed to tackle the nation’s public security crisis, one of the key components of President López Obrador’s plan to address escalating violence and ongoing organized crime. Without a clear mandate, some argue that the National Guard is creating the potential for rivalry between the military and civil society institutions. It was also perceived by some as “more of the same” heavily militarized solutions to Mexico’s ongoing drug and violence challenges that have, so far, proven ineffective.

Rather than continuing to invest heavily in federal military institutions, much more could be done at a state and grassroots level, such as investing in local police forces, improving criminal statistic tracking and information exchange at the state level, and investing in local and state court systems.

As an alternative, several speakers stressed that a priority area for addressing ongoing violence was strengthening local institutions and creating strong local power structures. One speaker proposed that rather than continuing to invest heavily in federal military institutions, much more could be done at a state and grassroots level, such as investing in local police forces, improving criminal statistic tracking and information exchange at the state level, and investing in local and state court systems.

In the weeks and months leading up to the delegation’s visit, border issues and immigration were at the forefront of the national conversation over the U.S.-Mexico relationship. Several speakers added nuance to the complexity of the migration crisis, explaining the political context around migration in Mexico, detailing national policy approaches, and discussing the pressures that drive migration from the Northern Triangle of Guatemala, Honduras, and El Salvador.

Throughout the trip, delegates were able to trace the variation at the national level of President López Obrador’s migration policy in his first six months as president. One speaker shared the president’s long term vision to stop migration from Mexico by making it unnecessary through investing in sustainable economic development and job creation, particularly in the south of Mexico, to ensure that Mexicans do not need to emigrate to the United States for better jobs (a vision which he recently rearticulated in his first interview with an international news outlet).

Another speaker characterized his early platform as “migration as a right.” In the first months of his presidency, President López Obrador introduced expedited processing for humanitarian visas with an authorization to work in Mexico for one year, a program which he quickly canceled and characterized as “too successful.” A handful of speakers mentioned anecdotally that they were skeptical such a policy would keep migrants within Mexico and that the United States remains the destination country for many of these migrants.

One speaker assessed that there was broad public support within Mexico for increased immigration enforcement, especially in Mexico’s southern states.

In practice, some noted that AMLO has recently backed away from his strongly pro-migrant stance. Most notably, President López Obrador dispatched the newly-formed National Guard to Mexico’s southern border to curb migrant flows from the south. This move was largely in response to Trump administration threats earlier this year to impose 5 percent tariffs on imports.

While dispatching the National Guard has raised concerns that blurring their focus could blunt the efforts against combating crimes and concerns over potential human rights violations, several experts assessed that stronger enforcement was likely to be well received. One speaker assessed that there was broad public support within Mexico for increased immigration enforcement, especially in Mexico’s southern states.

Amie Kashon is the Senior Officer of Special Initiatives at the Pacific Council.