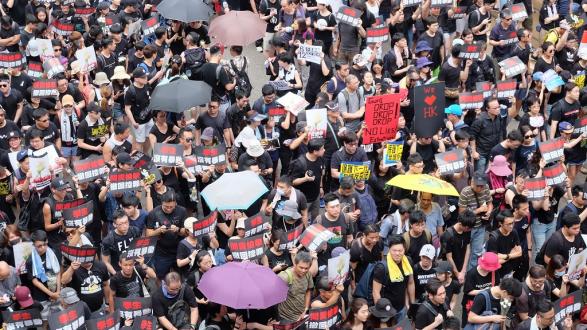 The global authoritarian resurgence has been cruel to democratizing societies in Asia. Once seen as potential models of transition, these young democracies or hybrid regimes have backslidden on the road to political liberalization. Authoritarian rulers have demonstrated a willingness to jail electoral challengers, crackdown on internet dissent and freedom of expression, seize power through coups, sanction extrajudicial killings of critics, undermine lauded democratic institutions, engage in ethnic cleansing, and dissolve opposition parties.

Hong Kong is regressing as well. Although the Chinese Special Administrative Region (SAR) still enjoys a “very high” human development index (HDI) value and a gross domestic product (GDP) of US$62,762 per capita, rule of law in the city, according to Hong Kong’s first prisoner of conscience, Joshua Wong Chi-fung, has been reduced to the will of Hong Kong’s authoritarian rulers.

In 2012, students took to the streets to demonstrate against the introduction of a Beijing-imposed “patriotic” curriculum designed to celebrate the mainland’s one-party system. By September 2014, ever more frequent, but independent, pro-democracy protests had merged into what became known as the Umbrella Movement. In opposition to the Standing Committee of the National People’s Congress of the People’s Republic of China’s (PRC’s) decision to prescreen candidates for Hong Kong’s chief executive post, demonstrators demanded an open nomination system.

Unimpressed with this reasoning, 100,000 democracy advocates soon took to the streets. Hong Kong’s largest protest in a decade ended after 79 days, however, when police dispersed participants with force.

Reminding Hong Kong that it was now just another PRC city, Chinese President Xi Jinping attended the 20th anniversary celebration of the handover on July 1, 2017, and the inauguration of the SAR’s fifth administration. Adding symbolism to the visit, the People’s Liberation Army Navy marked the occasion with an unprecedented port call by its first aircraft carrier, the Liaoning. Meanwhile, in an attempt to safeguard the Beijing delegation from “embarrassment,” the city’s government removed all political banners and images from the official route, banned demonstrators from assembling in Victoria Park, and deployed 9,000 of the city’s 27,000 police officers.

Nevertheless, large-scale protests are on the rise. In 2016, authorities in Hong Kong recorded 11,854 public assemblies and 1,304 public processions of more than 50 or 30 people, respectively. The total increase of 7,129 permitted civic activities year-on-year indicates more energetic citizen engagement in response to Beijing’s encroachment on the city’s political space. And the dramatic and sometimes violent clashes between police and pro-democracy activists protesting the extradition bill beginning in 2019 hardly suggest that ordinary Hong Kongers have consented to Communist rule from Beijing.

At the same time that mass political participation has been increasing, one in five residents of the SAR is considering emigration. As many as two of every three young adults may now be a potential migrant. This hypothesis of substantial current emigration receives further confirmation from official statistics. According to a Hong Kong government estimate—probably an undercount given data from receiving countries—7,600 Hong Kongers moved abroad in 2016. This figure was 8.6 percent higher than in the previous year.

The current period is not the first time that Hong Kong has experienced a notable pattern of increased emigration.

Statistics from preferred destination countries tell a similar story of high or increasing emigration, sometimes even exceeding the levels of the immediate pre-handover period on the late 1990s. Australia’s Department of Home Affairs, for example, registered 1,796 permanent migrants from Hong Kong for the 2016-2017 administrative year compared to 3,591 for 1996-1997. According to records from the Consulate General of Canada in Hong Kong, 2016 saw the largest number of Hong Kong-origin permanent residents moving to that country since the handover.

While only 24 Hong Kongers became permanent residents of Canada in 1997, by 2015 the number had risen to 630, and the following year it doubled to 1,210. Taiwanese figures for the number of Hong Kongers (and a presumably much smaller number of migrants from the Macau SAR) arriving to take up long-term residence in the country also indicate that post-Umbrella Movement emigration from Hong Kong is the most dramatic exodus since the handover era. For 2015, the Republic of China’s National Immigration Agency reported 7,230 permanent-resident arrivals from the two SARs, but even in 1996, only 3,388 such pending or approved applicants entered Taiwan from the region.

The current period is not the first time that Hong Kong has experienced a notable pattern of increased emigration. For example, during the post-World War II years, many indigenous inhabitants of the New Territories chose to relocate to the United Kingdom out of fear of an end to their traditional way of life caused by industrialization. Additionally, prolonged social unrest in the late 1960s to mid-1970s caused well-positioned residents to move to Southeast Asia, South Africa, and South America.

However, whereas earlier waves were prompted by economic and physical insecurities, the signing of the Sino-British Joint Declaration in 1984 and later the massacre in 1989 around Tiananmen Square provoked large-scale population flight during which Hong Kongers chose to “[vote] with their feet” rather than attempt to express their intense political indignation through other means.

For a young democrat in Hong Kong, Hirschman’s classic theory means that he or she has three major options: abandon the territory permanently, continue to believe in the possibility of progressive political change, or refrain from expressing liberal beliefs.

While Hirschman introduced the first two options as mutually exclusive, one scholar of migration in Latin America has noted that “exit does not mean abandoning the option of voice, but rather a change of context for its articulation.” Another study of student activism during the 1990s in Taiwan has modified Hirschman’s model of “’exit’ or ’voice’” to become one that includes the possibilities of “’exit’ and ’voice.’”

For a young democrat in Hong Kong, Hirschman’s classic theory means that he or she has three major options. The individual can despair of the government ever relaxing its grip on power and decide to abandon the territory permanently. If the individual believes that protest in today’s Hong Kong ultimately will prove to be as futile and suicidal as it was for the many victims of the Tiananmen Massacre a generation ago, a rational person should simply look out for oneself and start a new, better life elsewhere.

A second path is to continue to believe in the possibility of progressive political change in Hong Kong. This choice entails working all the more strenuously to publicize one’s pro-democracy views, in part by appealing to ordinary citizens to take to the streets and by helping to mount public pressure on the state to respect the human rights of Hong Kongers and allow non-elite voters to influence public policy and select officials.

While Beijing’s most recent threat to Hong Kong will likely end most vestiges of the “one country, two systems” policy, the SAR appeared to have already arrived at a critical juncture in its political decline by the fall of 2014.

The third major option is to reject emigration as the coward’s way out and a violation of filial piety (if, for example, his or her parents still live in the SAR and cannot or will not move). A believer in democracy also might look at political realities on the ground and conclude that the government holds such a monopoly on the use of force that public protest is doomed. This person privately might continue to hold liberal beliefs yet refrain from expressing them for fear of harming family members or because the individual has become exceptionally cynical about the chances of any political progress.

While Beijing’s most recent threat to Hong Kong will likely end most vestiges of the “one country, two systems” policy, the SAR appeared to have already arrived at a critical juncture in its political decline by the fall of 2014. Read the full research note here.