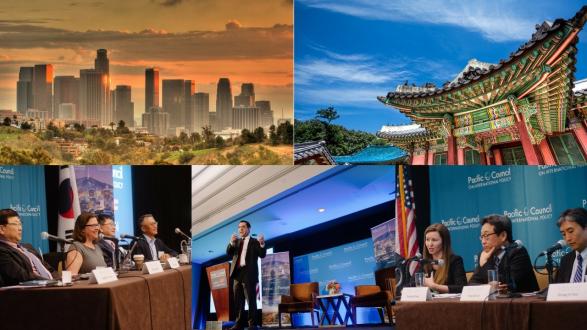 The relationship between South Korea and the United States was described in 2013 in a joint statement as an "anchor for stability, security, and prosperity on the Korean Peninsula, in the Asia-Pacific region, and increasingly around the world."

Under a new U.S. administration, will the relationship change? Can Seoul and Los Angeles be a model for broader U.S.-Korea relations? These questions and many others framed the discussions at the SeouLA Forum in Los Angeles on March 31, 2017.

Today the Pacific Council, in partnership with the Korea Foundation, releases a report emerging from the discussions that took place at the SeouLA Forum.

The forum—the first of its kind for the Pacific Council and Korea Foundation—convened business, civic, government, and academic leaders from the United States and South Korea to discuss key bridges in the U.S.-Korea relationship, including trade policy, innovation, and economic and cultural ties.

As the leading gateway to the Pacific Rim, Los Angeles has emerged as the center of Asian-American economic, business, educational, and cultural exchanges. And as Angelenos know, South Korea holds particular importance to Los Angeles in terms of trade, business, and culture. The University of Southern California has the largest number of Korean students of any university in the United States, and more Korean immigrants live in Los Angeles County than anywhere else in the United States.

This report would not have been possible without the generous support of the Korea Foundation. Learn more about their work.