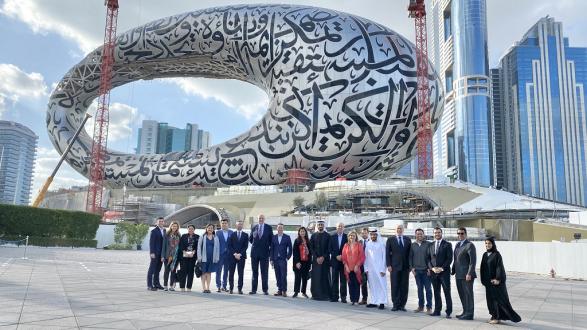 In February 2020, the Pacific Council on International Policy sent a delegation to Abu Dhabi and Dubai in the United Arab Emirates (UAE) at the invitation of the Crown Prince Court, to attend the Tenth Session of World Urban Forum and to meet with Emirate officials and executives. The delegation consisted of Los Angeles and California State officials, business executives, community leaders, and Consul General Hazza Alkaabi. The delegation had an opportunity to meet HH Sheikh Mohamed bin Zayed Al Nahyan and was hosted for a lunch by HH Sheikh Suroor bin Mohammed bin Khalifa Al Nahyan.

The World Urban Forum, established by the United Nations in 2001, provided delegates an opportunity to engage with civic leaders from around the world on the greatest challenges facing our communities. Delegates heard an address by Afghan President Ashraf Ghani and attended sessions on topics ranging from subnational cooperation on combating climate change to sustainable infrastructure development. Delegate and Deputy Mayor for International Affairs Nina Hachigian contributed by speaking on a panel about how Los Angeles is leveraging city diplomacy to achieve the Sustainable Development goals. Delegates also met with U.S. Ambassador to the UAE John Rakolta to learn more about the U.S.-UAE bilateral relationship.

The UAE has announced a 2050 target to cut carbon dioxide emissions by 70 percent through increasing the use of renewable energies and reducing energy consumption by 40 percent.

In meetings with Emeriti officials in Abu Dhabi, delegates learned about the UAE’s rapid development in its four decades since independence, moving from a state with limited access to electricity and clean water to global powerhouse. This development was underwritten by the discovery of tremendous oil and gas reserves, with the UAE holding the world’s fifth largest oil reserve and sixth largest natural gas reserve. While this has allowed for the nation to dramatically improve its citizens’ standard of living, speakers acknowledged that the use of these resources has fueled global climate change, which poses an existential threat to the region’s long-term habitability.

This reality has led the country’s leadership to explore how it can improve its own sustainability practices and diversify its economy in order to reduce its reliance on the exploitation and sale of fossil fuels. As the growing frequency of forest fires and drought have made abundantly clear, Southern California is similarly on the front line of the fight against climate change. The aim of the Pacific Council’s delegation was to explore ways that Los Angeles and the UAE can collaborate and share best practices to address our shared challenges. 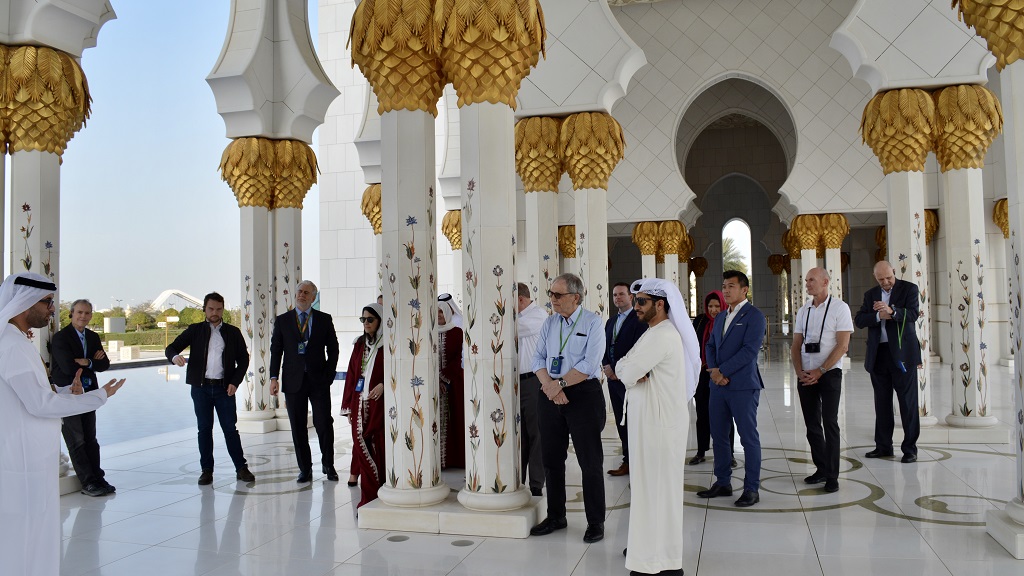 To discuss questions of energy sustainability and diversification, the delegation met with the Minister of Energy and Industry HE Suhail Al Mazrouei, The Abu Dhabi National Oil Company CEO HE Sultan Ahmed Al Jaber, and the Minister of Climate Change & Environment HE Thani Al Zeyoudi. In addition to an emphasis on clean energy development, there was a consensus that world governments are failing to take the threat of climate change seriously enough and emission reductions are not coming fast enough. The UAE has announced a 2050 target to cut carbon dioxide emissions by 70 percent through increasing the use of renewable energies and reducing energy consumption by 40 percent.

To achieve this goal, Abu Dhabi is investing in a municipal smart grid to increase energy efficiency. Delegates spoke about Los Angeles’ Green New Deal, announced in 2019 by Mayor Eric Garcetti, which sets a 100 percent renewable energy supply by 2045 target.  Still, the climate is changing now and speakers stressed the need for cities to redouble their adaptation efforts.  Both the UAE and Southern California face persistent water shortages that will only get worse, so meetings featured conversations around water conservation and efforts to make desalination more affordable and less energy intensive. The delegation also made a visit to Masdar to see work taking place to prepare for the future.

UAE officials expressed interest in further investing in the United States across a range of sectors, and delegates repeatedly made the case for Los Angeles, with its diverse workforce, robust economy, strong education institutions, and high levels of connectivity, as an ideal investment opportunity.

Simultaneously, the UAE is working to diversify its economy by investing in a growing array of industries. This included an interest in software development, manufacturing, health services, and the culture economy. On these topics, the delegation met with the Mubadala Group Deputy CEO Waleed Al Mokarrab Al Muhairi, CEO of the Dubai Future Foundation HE Khalfan Belhoul, Minister of State Food Security HE Mariam Almheiri, and Minister of Culture and Knowledge HE Noura Al Kaabi. These conversations highlighted a number of opportunities for LA-UAE collaboration, including on the issue of housing supply and affordability.

Mubadala has invested approximately $100 billion in the United States, with a focus on technology, including manufacturing semi-conductors in New York and producing defense systems for the U.S. military. Delegates also heard about Mubadala’s partnership with the Cleveland Clinic to open a multi-specialty hospital in the UAE. Speakers expressed interest in further investing in the United States across a range of sectors, and delegates repeatedly made the case for Los Angeles, with its diverse workforce, robust economy, strong education institutions, and high levels of connectivity, as an ideal investment opportunity. These meetings also resulted in several invitations for Emeriti business and government leaders to visit Southern California. 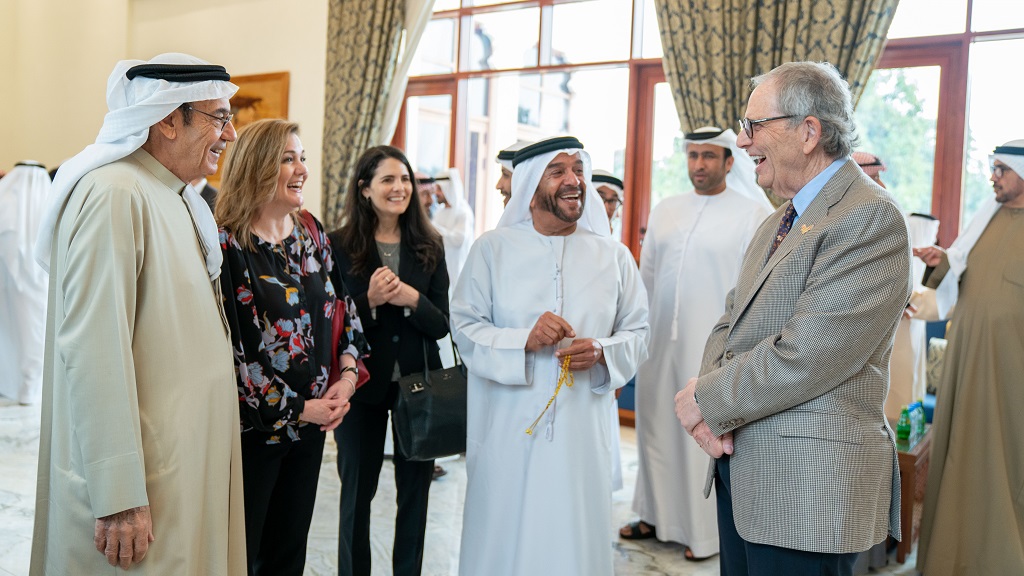 As California is the largest agricultural producer and exporter in the United States, delegates were interested to hear about the UAE’s approach to developing a food security strategy. This involved increasing domestic production, diversifying the nation’s food sources, and reducing waste. Similarly, as California continues to face chronic housing shortages, there were multiple discussions about lessons to be learned from Dubai’s rapid urbanization and the development of technology to 3D-printed buildings.

Delegates also learned about Emirati culture and the local culture economy. This included a private tour of the Sheikh Zayed Grand Mosque and the Qasr Al Hosn. HE Noura Al Kaabi spoke about the UAE’s efforts to develop a strategy for cultural and creative industries, both exporting the UAE’s creative outputs, but also exposing its citizens to global art and culture. The Ministry of Culture is working to better embed the arts in local school curricula.

Los Angeles-based film production companies are beginning to discover the UAE as a production location; the country has been used as a backdrop for a growing number of films.

Los Angeles-based film production companies are beginning to discover the UAE as a production location; the country has been used as a backdrop for a growing number of films. The delegation spent an afternoon at the Louvre Abu Dhabi, which holds the title of the Arabian Peninsula’s largest art museum and is intended to attract global tourists to the city. Relatedly, the delegation also visited the site of the upcoming 2020 World Expo, which is expected to attract 25 million visitors to Dubai over the course of six months.

The Pacific Council is committed to the value of subnational diplomacy and believes Los Angeles is a global city with an important role to play on the world’s stage. This includes exchanging ideas with other global cities on our common challenges and seeking ways we can partner to confront them. The delegation's visit to Abu Dhabi and Dubai laid the groundwork for future collaboration.