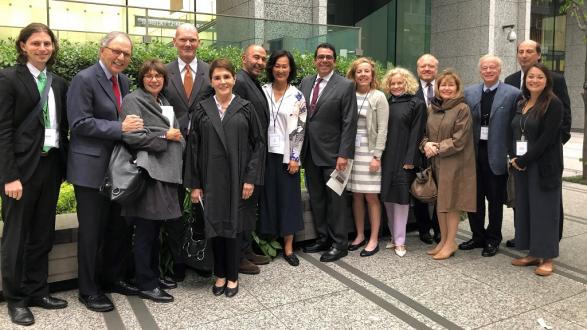 Last month, a delegation of Pacific Council sustaining members traveled to Tokyo and Kyoto, Japan, for meetings with business, government, and civil society officials to discuss U.S.-Japan relations in a changing world.

The discussions covered regional security issues, territorial disputes, the Korean Peninsula, global security, trade and economic growth, and more. Delegates met with many leaders during the week, including:

Below are some of the key takeaways from the delegation:

A recurring theme throughout the meetings was the strength of the U.S.-Japan relationship. Delegates were told on multiple occasions that U.S. foreign policy is what guides Japanese policy and there is a deep appreciation for U.S. global and regional leadership. Despite some worries about the new U.S. administration, there was minimal concern that it would weaken the U.S.-Japan relationship in the long-term.

Prime Minster Shinzō Abe and President Donald Trump have a good relationship and there was optimism that they would continue working closely together on trade and security issues.

One speaker indicated that the United States can be hasty, but had faith in our system to self-correct and continue having a positive impact on security and the global economy. Prime Minster Shinzō Abe and President Donald Trump have a good relationship, according to speakers, and there was optimism that they would continue working closely together on trade and security issues.

Territorial disputes have caused a sharp escalation in regional tensions in recent years. The Japanese government does not officially recognize that there is a territorial dispute, though China and Taiwan were particularly upset by Japan’s decision to purchase the Senkaku islands in 2012. The Senkaku islands are suspected to have oil reserves and since Japan’s decision to nationalize three of the five islands, China has responded to this perceived provocation. Since Japan nationalized the islands, China has confronted the decision by regularly sending ships and aircrafts into the disputed area.

In 2016, Japan had more scramble missions to intercept Russian and Chinese jets off its coast than at the height of the Cold War. This underscores the rising tension between Japan and China as China continues to exert its growing military and economic power in the region.

As an indication of the escalation, in 2016, Japan had more scramble missions to intercept Russian and Chinese jets off its coast than at the height of the Cold War. According to one of the speakers, the missions to intercept Chinese jets were of particular concern as their flight paths tended to be more aggressive and lacking in the mutual trust and predictability that exists between the Russian and Japanese pilots. This underscores the rising tension between Japan and China as China continues to exert its growing military and economic power in the region.

The Democratic People’s Republic of Korea’s (DPRK) nuclear program is of particular concern to Japan given their proximity to the Korean Peninsula. Over the past few years, the DPRK’s progress in its ballistic missile and nuclear warhead capabilities have been substantial, which easily places Japan in its potential attack range. The DPRK’s most recent missile tests were shot directly over Japan and were likely a political demonstration to show that Guam was within range of their missiles.

One speaker noted that the criticism of Japan for not shooting the missiles down was unfounded as the missiles flew above Japan’s airspace into outer space and landed in international waters. Abe has supported the recent summit between President Trump and Kim Jong-un and indicated that he would be open to direct talks with the North Korean leader. As in the United States, there was a mix of optimism and concern around the Trump-Kim summit during these conversations.

One of the speakers noted that while there is broad consensus among interested parties to achieve a denuclearized Korean Peninsula, the DPRK could still pose a significant threat to Japan with the continued development and deployment of its short and mid-range missiles. Japan would like to avoid having the nuclear issue decoupled from more comprehensive security concerns.

While Japan does not have formal diplomatic relations with the DPRK, the two governments have had talks around the nuclear program and the kidnapping of Japanese citizens.

While Japan does not have formal diplomatic relations with the DPRK, the two governments have had talks around the nuclear program and the kidnapping of Japanese citizens. Japan’s relationship with the DPRK is particularly complex as they have 150,000 Koreans living in Japan that belong to Chongryon—an association of Koreans that identify with the DPRK. Starting in the 1990s, the Japanese government has cracked down on the activities of Chongryon, including passing legislation that prevents them from funneling money back to the DPRK. Along with worldwide sanctions, this has contributed to financial strain on the North Korean regime.

Since WWII, Japan has not engaged in international conflicts, which has become a recent point of political tension. Article 9 of the Japanese constitution states that Japan will not use force to settle international disputes and will never maintain land, sea, and air forces for war potential. Despite this, Japan maintains a highly capable "Defense Force" to be used solely for defensive capabilities. Prime Minster Abe has been campaigning to amend the constitution to allow for a more traditional military force with fewer limitations.

Public opinion polls in Japan show an almost even split between people that want Article 9 to be amended and those that want it to remain unchanged. Those who oppose changing the constitution cite the article as the reason Japan has avoided involvement in international conflicts since World War II. The speakers pointed to a few benefits of this perceived neutrality, including never being the target of a foreign terrorist attack and Japanese journalists and experts having much better access across the globe than their American counterparts.

Prime Minster Abe does not currently have enough support for the two-thirds majority needed to change the constitution and allow a more traditional military force, but took executive action to broaden its interpretation.

Prime Minster Abe does not currently have enough support for the two-thirds majority needed to change the constitution, but he took executive action to broaden the interpretation of Article 9. Broader interpretation allows Japan to defend its allies abroad and was met with support from the United States and criticism from South Korea and China.

Japan’s economy recently experienced a downturn just as it appeared that Prime Minister Abe’s economic policies (known as "Abenomics") had freed the country of decades of stagnation. The economy contracted 0.6 percent in the first quarter of 2018 and is expected to net a one percent growth rate for the year. Export growth, capital investment, and a shrinking labor market are a few of the major factors hindering a more robust economy.

As an export-driven economy, the U.S. administration’s trade wars leaves Japan particularly vulnerable to trade volatility. Compounding this situation is Japan’s aging and declining population with over 21 percent aged 65 or older. This has created a tight job market in which there are 60 percent more jobs than job seekers. As people are retiring, more jobs are being automated and replaced by machines. Additionally, Japan suffers from the widest gender employment gap (and gender equality more broadly) among the world’s major advanced economies.

There are both public and private initiatives in place to address the gender employment gap in Japan; however given the cultural underpinnings of Japan’s gender inequality, these efforts may be slow to come to fruition.

While in Japan, the Pacific Council met with Kathy Matsui, vice chair of Goldman Sachs Japan who coined the term "Womenomics." Matsui is a strong advocate of bolstering women's participation in the job market. Currently, 60 percent of women never return to work after their first child. If Japan were to close the gender employment gap, that would equal a 13 percent increase in the country’s GDP. There are both public and private initiatives in place to address the gender employment gap; however, given the cultural underpinnings of Japan’s gender inequality, these efforts may be slow to come to fruition. Furthermore, there may not be enough incentive to hold the private sector accountable for closing the gap.

Check out photos from this delegation on our Flickr page.