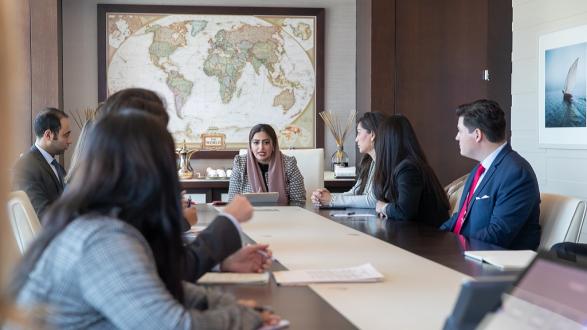 What they heard wasn’t always uplifting. The Middle East is suffering from the worst upheaval in decades, with protests in Egypt, Iraq, and Lebanon; political transitions in Algeria and Sudan; civil wars in Libya, Yemen, and Syria; and regional conflicts between the Gulf states against Iran and Turkey against the Kurds. At a time when the United States wants to be less involved in the region, its local partners (and adversaries) are demanding more attention than ever.

Delegates, including young consultants, policy analysts, and entrepreneurs met with officials at the United Arab Emirates (UAE) embassy, the Defense Department, the State Department, the Middle East Institute (MEI), the Arab Gulf States Institute in Washington (AGSIW), and the Brookings Institution. Topics covered in discussions included Iran’s geopolitical situation, Emirati foreign and domestic policy, the dire state of Iraq’s economy and government, turmoil in Yemen, and the fight between Turkey and the Kurds in Syria. The following is largely drawn from the views of those interviewed.

The United States has pursued a “maximum pressure” campaign against Iran, which has largely succeeded in crushing the Iranian economy. However, it has neither compelled Iran to return to the negotiating table nor curtailed its “malign” regional activities, which have actually increased. The Trump administration has had a very measured response to Iranian hostile actions, indicating a desire to avoid a direct war. It seems intent on drawing a red line only at evidence of Iranian responsibility for the killing of Americans, leaving wide latitude for Iran to operate against U.S. interests without fear of a U.S. military response.

Iran, sensing that the “maximum pressure” campaign has largely bottomed out and cannot do much further damage, feels emboldened to increase its influence activities regionally and lash out at its adversaries.

Iran, sensing that the “maximum pressure” campaign against its economy has largely bottomed out and cannot do much further damage, and taking notice that it did not face any repercussions for its attacks on Gulf shipping and oil facilities this summer, feels emboldened to increase its influence activities regionally and lash out at its adversaries.

9/11 was a pivotal wake-up call for the UAE. Two of the 19 hijackers were Emirati. The attacks led to a major policy shift, both domestically and internationally, as the Emiratis sought to reform their society and limit the influence of Islamism regionally.

Domestically, post-9/11, the Emirates launched an education initiative to remove Islamist teachers from schools and reorient towards international education standards. The country is predominantly concerned with providing jobs to the next generation, which it feels is the best way to prevent youth from joining extremist groups.

With regard to foreign policy, the Emirates were the first country to cut ties with the Taliban after 9/11, and, in the wake of the Arab Spring, is determined to limit the influence of the Muslim Brotherhood in the region. The UAE’s vision of a “more stable, moderate region” is predicated on elevating and protecting marginalized religious communities rather supporting those seeking the downfall of authoritarian governments through mass protest.

Iraq is fortunate to have responsible political leaders in power, but the government has proven ineffective in providing services. After so many years of international intervention in its politics, the Iraqi people are no longer focused on foreign relations, but only bread-and-butter domestic concerns.

The country suffers from three main problems. The first, in the short-term, is the Islamic State. Though the terrorist group no longer controls territory, it is by no means defeated, with insurgent capabilities and a strong intelligence network.

Iraq is torn equally between Iranian and U.S. influence.

In the medium term, Iraq is faced with continuous meddling from Iran, which controls both militia groups and much of the country’s bureaucracy. However, Iran doesn’t “own” Iraq—the country is torn equally between Iranian and U.S. influence.

In the long term, Iraq must improve its economy, which suffers from a socialist, statist mentality which fears foreign investment as outside “domination.” It earns the same oil revenue as Kuwait, but with 40 times the population. In short, it is a rentier state that cannot afford to be one.

The Saudi-led campaign in Yemen began in 2015 with three goals: restore the internationally-recognized Yemeni government led by President Hadi; deter Iran from further interference in the Arabian Peninsula; and eradicate the Houthi threat on its border. In all three respects, the campaign has failed.

This summer, the UAE announced that it was drawing down forces in Yemen, most likely in response to increased Iranian hostility in the Gulf. The drawdown surprised Saudi Arabia, given that the bulk of anti-Houthi ground forces in Yemen were led by the UAE. The drawdown may, therefore, serve as a catalyst for increased cooperation with UN-led mediation, even as it threatens to tear the pro-government faction apart between northern federalists and southern secessionists.

Both al Qaeda and the Islamic State in Yemen remain potent, if not in size, then in technological capability.

Meanwhile, the United States’ war on terrorism in Yemen has bred success against both al Qaeda and Islamic State factions, largely due to UAE-led militias leveraging native Yemenis to deter tribal cooperation with the terror groups. However, both al Qaeda and the Islamic State in Yemen remain potent, if not in size, then in technological capability.

The Kurds were the only partner willing and capable enough to fight the Islamic State in Syria. The United States was able to liberate the entire territory with only a limited number of casualties, while the Kurds suffered 11,000 losses.

The administration tried to devise a “safe zone” on the Turkish-Syrian border to appease Turkish President Erdoğan and had already started the process when the White House announced its pullout. The administration did not necessarily see the pullout as a “greenlight” to Erdogan, but an indication that Turkey was now acting on its own, without U.S. support. The administration expected that the threat of sanctions would be a sufficient deterrent to Turkey. 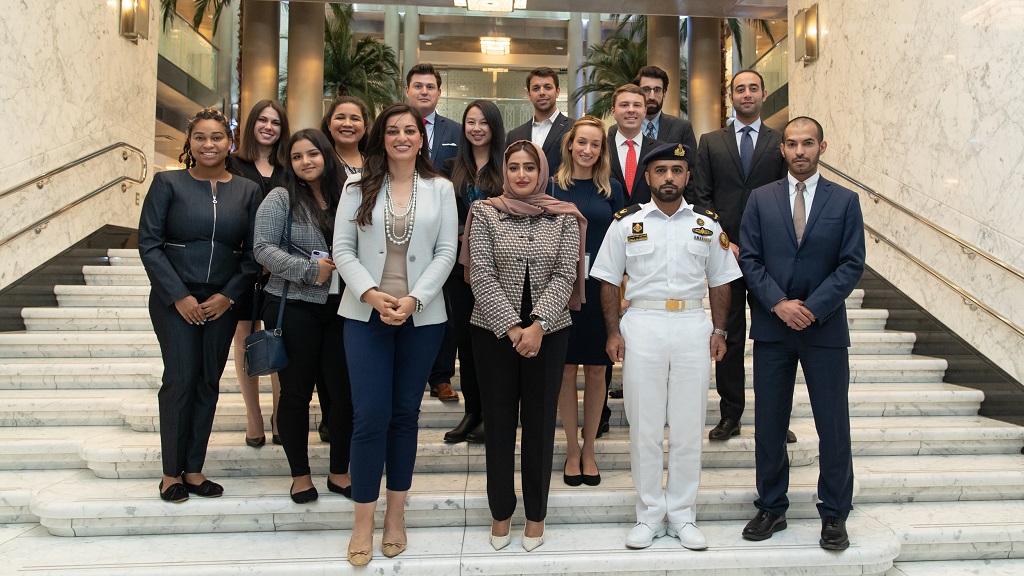 In the long-term, the U.S. goal in Syria is stabilization, particularly in areas liberated from the Islamic State. The United States will maintain its military presence in the country and has strong ties to humanitarian aid groups. In the interim, the Assad regime—and the Russian government—should be held responsible for chemical weapons attacks and prevented from mass civilian slaughter in Idlib, the last remaining rebel stronghold.

Despite the dire picture drawn above reflecting the precarious state of the region, the trip was book-ended by signs of real hope. It began by highlighting the role that indigenous art could play in peacebuilding, conflict resolution, and bringing marginalized voices to the fore. And the final day concluded with an expression that the current millennial generation of Arabs and other locals—more connected, empowered, and engaged than ever before—could truly herald a sea change in the trajectory of the Middle East.

Jordan Reimer is a Pacific Council member and a policy analyst at the RAND Corporation.

Learn more about Pacific Council delegations. Check out more photos from this delegation on our Flickr page.

The views and opinions expressed here are largely drawn from the views of those interviewed and do not necessarily reflect the official policy or position of the Pacific Council.