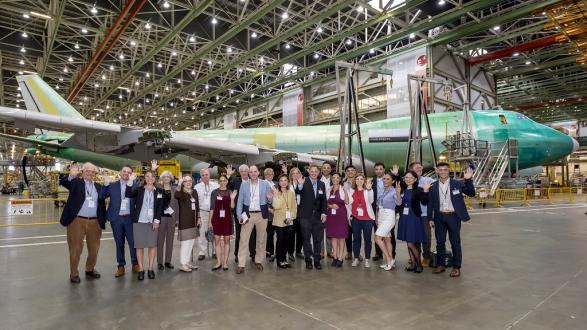 Last month, a delegation of Pacific Council members traveled to Seattle, Washington, to explore global policy at the nexus of business, national security, and innovation.

Delegates toured multiple Boeing facilities and the U.S. Coast Guard facility in the Puget Sound, and met with military, philanthropic, and business leaders during the visit, including:

Below are some key takeaways from two of the delegates, Pacific Council members Ecem Yakut and Aaron Brooks.

The first thing you realize when you walk into Boeing’s Everett facility is the use of space. It is evident that advances in technology and in-house knowledge accumulated over the years foster an ideal environment for streamlining operations.

According to David Reese, manager of visitor relations at Boeing Commercial Airplanes, there are two trends happening on the factory floor. The first is automation. Assembly robots and automatic guided vehicles that move parts between workstations increase productivity while using little space.

The second trend is the use of carbon fiber as an alternative material to aluminum. As fuel is the number one cost for airline operators, carbon fiber’s high strength-to-weight ratio allows for reduced fuel use in-flight. For instance, Boeing’s 787 production line is dedicated to producing planes made largely of carbon fiber composites.

Certainly, what goes on in the factory floor is related to market expectations. Boeing estimates overall delivery of about 41,000 planes in the next 20 years as the global demand for air travel increases and the center of gravity for air traffic shifts from Europe to Asia. Today, one in every four planes Boeing delivers goes to China.

As the largest exporter in the United States by dollar value, Boeing seeks to expand its innovation to areas such as modernizing air traffic control as well as reducing the hazardous impacts planes have on the environment.

Darren Hulst, manager director of market analysis and sales support at Boeing Commercial Airplanes, describes the industry which grew at an annual average rate of five percent per year as "very resilient."

"Despite several crises in the 2000s, the market has recovered pretty quickly and for the first time in history, the net profits for operators have stabilized since 2010," Hulst said.

With strong market demand, the bottleneck becomes the supply chain. Bill McSherry, vice president of government operations at Boeing Commercial Airplanes, mentioned the importance of supplier communications in their Renton facility. Boeing’s Renton facility houses the production line for the 737 and is considered to be the most efficient airplane factory in the world. It takes on average 15 days to build one 737 airplane, whereas the 787s built at the Everett facility take about three and a half months. The quick turnaround for 737s is due to Boeing’s strategy of assembling prefabricated parts made by other suppliers.

Currently, Boeing is striving to be the integrator and marketer of planes as opposed to a fabricator of parts. As the largest exporter in the United States by dollar value, Boeing seeks to expand its innovation to additional areas such as modernizing air traffic control as well as reducing the hazardous impacts planes have on the environment.

At the Boeing facility tour, we received informative, thorough briefings at every part of our tour that enhanced our understanding of Boeing’s approach to growth.

We learned how Kaizen [the Japanese word for "improvement" that in business refers to "continuously improving all functions and involve all employees from the CEO to the assembly line workers"] has changed Boeing’s approach to the supply chain. We also learned about the complexities and challenges of foreign military sales as part of Boeing’s business model.

Our time at Boeing was a perfect way to think more about how air travel has made the world smaller and more accessible over the past century, even as our population has grown exponentially. Solving global problems has become more complex—which made our group more prepared and ready to learn from the leadership of the Gates Foundation.

The Gates Foundation Discovery Center made it clear that understanding challenges more fully comes with the responsibility to solve them. This is the same message that I have heard from fellow Pacific Council members after their return from Council delegations all over the world.

Everyone at the U.S. Coast Guard from the captain down to the newest recruit explained their daily interaction with international vessels coming and going from the Port of Seattle in a way that made me understand that they are conducting front-line diplomacy as well as security operations.

On the second day of the trip, we visited the Port of Seattle to tour the U.S. Coast Guard’s operations and command center. Despite the incredible technology, modern vessels, and equipment, I left our tour of the Coast Guard Sector Seattle most impacted by the thoughtfulness and compassionate leadership as the "secret weapon" of our Coast Guard. Everyone we met or engaged with there was a top-shelf professional.

Everyone from the captain down to the newest recruit explained their role in dealing with law enforcement, Native American First Nations, the warm and ongoing bilateral relationship with the Canadians, and the daily interaction with international vessels coming and going from the port in a way that shows they are conducting front-line diplomacy as well as security operations.

With generous support from the "Pay It Forward" campaign, I was able to participate in the Seattle delegation at a reduced rate for emerging leaders within the Pacific Council community. I want to offer up my sincere gratitude to everyone that has contributed to the "Pay It Forward" campaign. Without their generous support, my participation in the delegation, as well as much of my participation in rewarding events over the past two years, would simply not have been possible.

Ecem Yakut is a Pacific Council member and a business analyst at BuildSavings.

Aaron Brooks is a Pacific Council member and a reading clerk for the Florida House of Representatives.

Check out photos from the delegation.