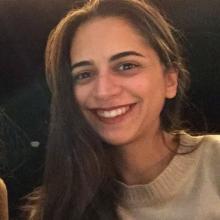 Born and raised in Istanbul, Ecem Yakut moved to Los Angeles to pursue her academic career in business strategy and finance. She earned her B.S. in Business Administration from Marshall School of Business at University of Southern California, where she was a member of Marshall’s most prestigious student organization, Marshall Case Team. She was selected to represent Marshall in Duff & Phelps YOUniversity Deal Challenge and became a finalist in a national case competition. Her interest in international business began during her summer abroad in London where she studied at London School of Economics. She had the opportunity to learn about the different political philosophies of countries and its effects on international trade. Inspired by her international experience, Ecem started working at Ecologic as a strategist where she helped countries collaborate on multi-national projects in health and environmental sciences. Ecem aspires to pursue a career in international development and write about economy. She currently works at BuildSavings and pursues a Certificate in Finance at University of California, Los Angeles.