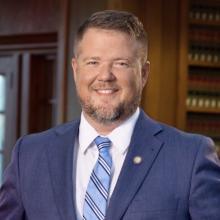 Aaron J. Brooks is an operations and logistics professional with global experience, coming from 21 years of Marine Corps service before receiving an Honorable Discharge as a field grade officer.

Aaron is a member of the Truman National Security Project, an associate member of The Royal Institute of International Affairs, and has served on several nonprofit boards in the communities where he has lived. He completed a two-year term as the VP of Programs for the Council of Supply Chain Management Professionals (SD / Baja) where he regularly partnered with member companies that straddle the busiest international border crossing in the world.

Aaron has also contributed as a talk show host, field reporter, and desk anchor for a weekly radio and television program as part of Homefront Media. Aaron has recently served as Reading Clerk for the Florida Legislature, providing him with a front row seat to changing law and policy in a dynamic swing state.

Aaron loves dogs and gardening, and he believes that hospitality is still the best form of diplomacy.