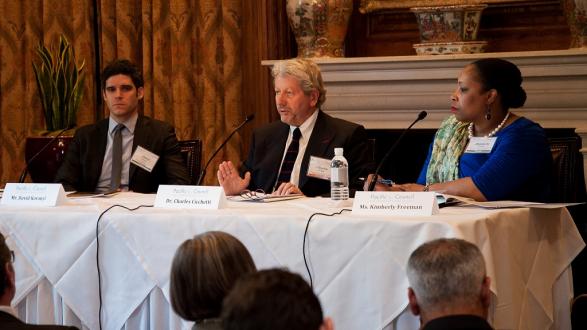 This year’s Spring Conference was an illuminating day of debates and exchanges with fellow Pacific Council members and other experts during panel discussions, roundtable dialogues, and a high-level keynote interview. We were pleased to host PIMCO CEO Douglas M. Hodge, Dr. Nina Ansary, and many others.

The day’s thematic sessions included discussions on China’s economic outlook; the Pacific Council’s report on Guantánamo Bay; challenges and solutions of the future of global energy; the women’s movement in Iran; Russian foreign policy 25 years after the Cold War; and how to confront today’s global health challenges. The following are just a few of the notable insights from Spring Conference 2016.

Back Down to Earth? China’s Economic Outlook in 2016

The panel discussed the slowdown of China’s economy last year, the effect it had on world markets, the increase of Chinese investment in Los Angeles, and President Xi Jinping’s corruption campaign. Trivedi and Song pointed out that the Chinese economy is undergoing an important transition, moving from manufacturing to a focus on consumption and providing services to the growing middle class in urban areas, which some predict will double to 600 million by 2020. 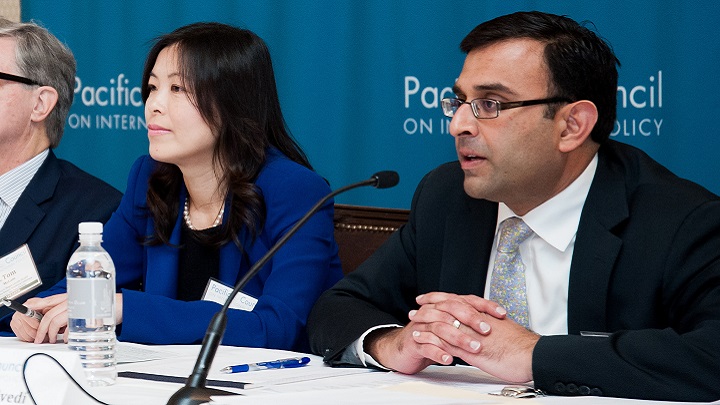 “You need to put it in perspective,” McLain said. “Only 8% of our exports go to China and yet China announces some bad numbers and all of a sudden there’s a huge impact here; it is totally overblown. The numbers and what’s happening there often have an impact on our stock market that is totally outsized compared to the real financial impact.”

The Pacific Council Task Force on Guantánamo: A Town Hall

In February, the Pacific Council Task Force on GTMO published a report calling on the United States to fairly and transparently expedite the Guantánamo trials by putting federal judges in charge. The task force consists of 17 attorneys and policy specialists, the majority of whom have traveled to Guantánamo as official civilian observers. 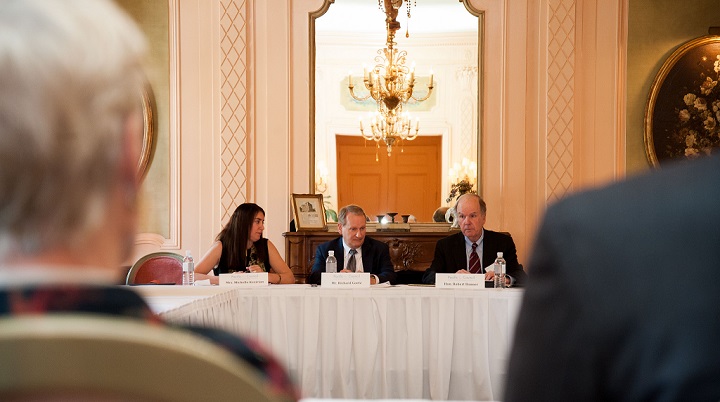 “American justice is on trial at Gitmo and it is not looking very good,” said Bonner. “To state that the pace of the trial is glacial is to significantly understate the case. The embarrassing delays in the trial of those accused under the Military Commission Act gives new meaning to the term ‘justice delayed.’”

“It feels like time stands still,” Kezirian said when asked about being at Gitmo. “Military commissions are slow moving machines that seem to go nowhere. This matters because the world is watching us and how we handle justice. We do not look good.”

Kimberly Freeman, assistant dean for Diversity Initiatives and Community Relations at UCLA’s Anderson School of Management, moderated this panel with Dr. Charles J. Cicchetti, professor of Policy, Planning and Development at USC’s Price School of Public Policy, and David Koranyi, director of the Atlantic Council’s Eurasian Energy Future Initiative. They discussed clean energy use, oil prices and their impact on economic prosperity, and the implications of the COP21 meeting in Paris for U.S. energy policy.

“2015 was a record year dedicated to renewable energy,” said Koranyi. “Oil prices and gas prices depressed and there were enormous increases in clean energy investments and decreases in cap backs for oil and gas.”

Koranyi stressed that U.S. leadership is key to upholding international consensus and action on climate change following the COP21 meeting, which he said was the first time leaders came together and agreed in principle to act on climate change, though diplomatic complexities prevented them from reaching agreement on some important details. In his view, COP21 will not provide a solution for climate change.

The panelists agreed that the world has made progress -- including growth of renewable energy -- but that Washington needs to hold itself and other nations accountable.

How will last summer’s historic nuclear accord between the Iran and the P5+1 (United States, Britain, Russia, France, and Germany) change life inside the Islamic Republic for everyday Iranian citizens? Are Iran’s changing demographics helping to bolster social reform and a growing feminist movement? At Spring Conference 2016, Dr. Jerrold D. Green, president and CEO of the Pacific Council, moderated a discussion on these issues with Dr. Nina Ansary, a historian and expert in the women’s movement in Iran, and the author of Jewels of Allah: The Untold Story of Women in Iran. 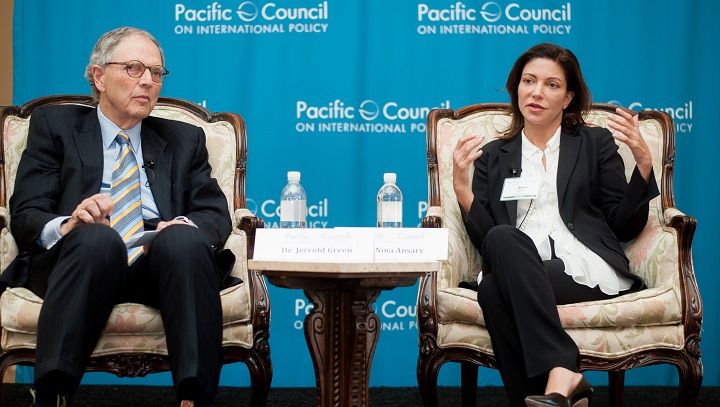 Dr. Ansary, who recently spoke to the Pacific Council on the Iran’s burgeoning women’s movement, stressed that women in Iran have not allowed themselves to be defined and oppressed by the harsh patriarchal system they are forced to live under.

“Since 1979, Iran has been in the news almost entirely for negative reasons,” said Ansary. “What’s been left out of that narrative is what’s going on beneath this regime, specifically where women are concerned. Today’s generation of women, born and raised in this environment, does not by and large reflect the gender ideology of the hardline ruling faction. This is a country where women outnumber men in higher education.”

Russia and the World: A New Yearning for Empire?

Simon Saradzhyan, director of the Russia Matters Project and assistant director of the U.S.-Russia Initiative to Prevent Nuclear Terrorism at Harvard’s Belfer Center for Science and International Affairs, and Dr. Nikolai N. Sokov, senior fellow at the James Martin Center for Nonproliferation Studies, provided clarity on Russia’s intentions on the world stage during this thematic panel moderated by Jennifer Faust, executive vice president of the Pacific Council.

Sokov, who also penned a column on this topic for the Pacific Council leading up to the conference, argued that what we are seeing today is not a new Cold War.

"Russia is not going to hand Crimea back under any circumstances; the chances of that are near zero." - Simon Saradzhyan

“We tend to forget: the Cold War was not about the number of missiles and tanks,” said Sokov. “The Cold War was about a systemic conflict and challenge of two completely different economic, social, and political systems. That’s not the conflict we have today. On social and moral issues, Putin is almost a Goldwater Republican. So how do we classify today’s conflict? It’s quite different.”

Sokov said he believes that the West and Russia can cooperate, citing the agreement between the United States and Russia on a timeline to destroy Syrian chemical weapons in 2013 as an example.

“Hey,” concluded Sokov, “at least Putin is better than Stalin.”

In February the World Health Organization declared the Zika virus a public health emergency of international concern. This panel tackled the economic, social, political, and environmental issues of global diseases and other health challenges. Pacific Council director and senior vice president of community relations and development of Cedars-Sinai Arthur J. Ochoa moderated, with Dr. Peter Katona, clinical professor of Medicine in Infectious Diseases at UCLA, and Dr. Erica Ollmann Saphire, professor at the Scripps Research Institute’s Department of Immunology and Microbial Science, on the panel. 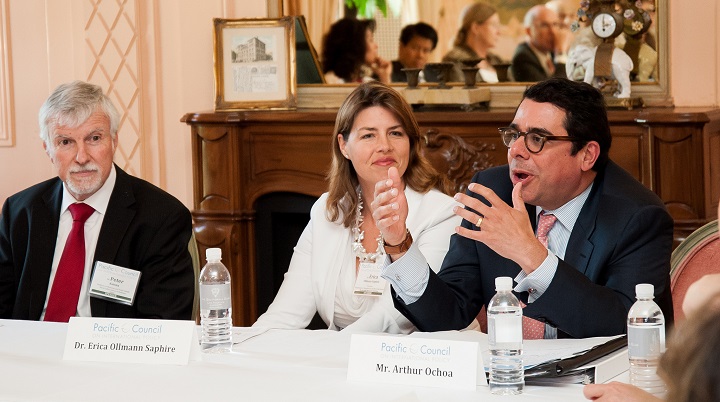 Katona argued that despite great accomplishments in global health, such as the eradication of smallpox, the discovery of penicillin, and the development of vaccines that prevent childhood diseases, there are still enormous global health challenges.

Educating the public on real global threats is critical in combatting crises like Zika and Ebola, according to Dr. Ollmann Saphire. "We need to be more forward thinking on policy," she explained. "We also need to understand the economic implications of these diseases so the money we invest is effective."

The panelists agreed that travel, tourism, trade, globalization, socioeconomic factors, and poverty all amplify the spread of diseases globally, and that international organizations like WHO have not addressed epidemics effectively.

Spring Conference highlights the work and expertise of the Pacific Council community of members and partners. Take a closer look at this year's event, and read all Spring Conference analysis now in our Newsroom.