Russia Shows History Has Not Ended 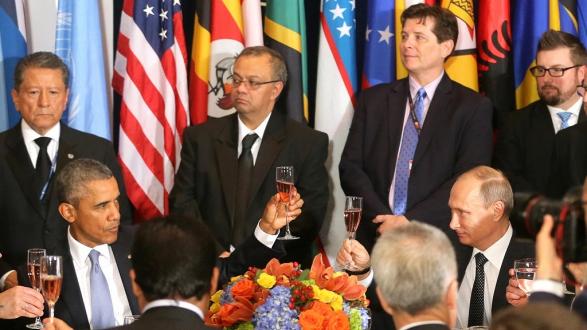 The end of the Cold War, which supposedly amounted to the victory of liberal democracy and capitalism over communism, was supposed to end the systemic conflict of social, economic, and political systems. Francis Fukuyama famously dubbed it “the end of history.”

A quarter century later, the ever-worsening conflict between the West and Russia begs for an explanation: is this truly a new Cold War as some claim, which entails, by definition, a new systemic challenge along the same social, economic, and political terms as before? That would be an attractive thesis: the Russian system is not a liberal democracy and its free-market qualities are widely – and justifiably – questioned. On the other hand, Russian leaders have not claimed an alternative to the Western system – they insist they have a version that is only marginally different and even these differences are instrumental rather than fundamental.

One could also ask whether Russia is bent on positioning itself as one of the great powers in a system that harkens back to the 19th and early 20th centuries’ multipolarity with purely geopolitical competition among powers. If that is correct (and Moscow has been talking about multipolarity since the late 1990s), Russia should be stopped because we know that multipolar systems are inherently unstable and lead to major wars -- a particularly unwelcome prospect in a nuclear era. Yet Russia’s ability to engineer multipolarity is questionable at best: according to the World Bank, the U.S. economy alone is about seven times greater than that of Russia. Surely, that fact has not escaped the attention of Russian leaders, who must be aware that conflict with the West only clears the path for China, a more likely competitor for the United States.

In Russia’s view, Western encouragement of the spread of democracy and the removal of dictatorships involved violations of international law and led to chaos.

A close look at the original Russian concept of multipolarity suggests that the underlying idea is that of a “concert” – the arrangement created at the 1814 Congress of Vienna. There is no balance of powers – instead, there’s a consensus of economically and militarily leading states that serve as the “board of directors.” Russia’s position as the sixth or seventh state in the global economic pecking order, and its nuclear weapons, entitle it to a place at the table. The United States is seen as the “chairman of the board” rather than a hegemon. The UN Security Council is an embodiment of the “concert,” but in that institution, as well as in the G-8, Russia remains a minority.

Conflicts were almost inevitable. Things have gone from bad to worse since the U.S.-led invasion of Iraq. In Russia’s view, Western encouragement of the spread of democracy and the removal of dictatorships involved violations of international law and led to chaos – Iraq in 2003; Libya in 2011 and the Arab Spring in general; and later Ukraine. In essence, the problem for Moscow was not that the United States has been and remains the global leader – rather, that America is an inept leader whose actions make things worse.

That perception has had two consequences:

First, Russia engaged in what might be called -- and was certainly seen as -- “corrective actions.” For example, Moscow consistently sought to limit the scope of sanctions imposed on Iran to its nuclear program instead of comprehensive sanctions that would squeeze the Iranian economy. Russia’s military operation in Syria, which began in 2015, represented a new stage in its “corrective approach” in that Russia took action independently of the United States and its allies to change the political landscape – with a certain degree of success.

One could say that Russia represents an opposition to the United States and its allies at almost every turn.

Second, Moscow clearly believes that its status as a “board member” entitles it to the same rights as those of the United States and uses what it considers precedents in its own policy. It remained opposed to the independence of Kosovo, for example, but once the West recognized the former province of Serbia as an independent state, Russia considered itself free to do the same – in 2008 over Abkhazia and South Ossetia and in 2014 over Crimea.

One could say that Russia represents an opposition to the United States and its allies at almost every turn. But at least until 2014 it was “loyal opposition” in the same sense that a board member might oppose the chairman of the same board. It is more difficult to define the current Russian position, but the degree of cooperation on Syria that we see today might suggest that Moscow has not (at least, not yet) switched to a full-scale systemic challenge.
____________________

Dr. Nikolai Sokov is a Senior Fellow at the Middlebury Institute for International Studies at Monterey, Center for Nonproliferation Studies.

Share your own opinion on social media ahead of Spring Conference 2016: is Russia's world view compatible with the West? Tweet at us @PacCouncil: you can follow along and join the conversation on April 15 using #SpringCon16.