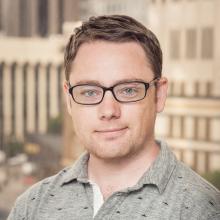 Justin is an author, journalist, travel writer, actor, poet, musician, and politician. He was the youngest elected member of the Altadena Town Council at age 19. He received a Master's in Public Diplomacy from USC in 2018 and a Bachelor's in Mass Communications/Media Studies from UC Berkeley in 2009. At USC he served as the editor-in-chief of Public Diplomacy Magazine and as a staff writer at the Daily Trojan. He has written for more than 20 print and digital publications, frequently for the Pasadena Weekly. His book about his travels through Africa, Saturnalia: Traveling from Cape Town to Kampala in Search of an African Utopia, was published by Rare Bird Books in January 2015. He is the host, producer, and editor of the show "Well Read with Justin Chapman."

He also serves on the West Pasadena Residents' Association (WPRA) Advisory Board and Pasadena City Councilmember Steve Madison's Advisory Group. He previously served as president of MEMAH, as secretary of the WPRA, as secretary of the ACLU Pasadena/Foothills Chapter, and as a member of the UN Association Pasadena Chapter's Communications Committee, LA Press Club, and LA World Affairs Council. He was appointed to serve as a commissioner on the city of Pasadena's Northwest Commission from 2015-16.

As a professional child actor, he performed in dozens of movies, commercials, TV shows, and plays.

CONTINUING OUR COLLABORATION ON FOREIGN REPORTING WITH USC
A GUIDE TO CALIFORNIA'S LOCAL-TO-GLOBAL BALLOT MEASURES
JANE OLSON: THE PACIFIC COUNCIL IS A WEST COAST INSTITUTION
What Will Life During and After the Pandemic Look Like?
Climate Change Disproportionately Affects Women
Virus Having Bigger US-China Economic Impact Than Trade War
The World Needs Reliable Information Now More Than Ever
COVID-19 Lowers Hostile Rhetoric Between Saudi Arabia & Iran
Port of LA Remains Open During Statewide Stay-At-Home Order
Iran, China, and Other International Hotspots in 2020