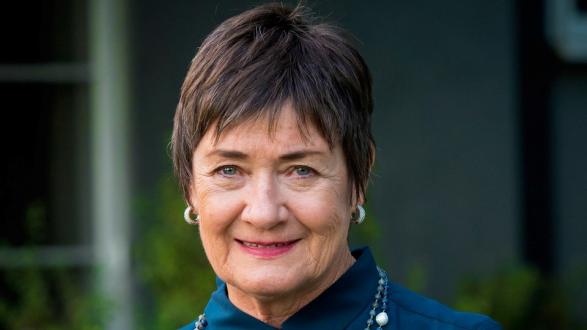 A member of the Pacific Council on International Policy’s Board of Directors from 2006-2017, Ms. Jane Olson is a significant figure in the international policy world. She helped organize the Council’s first members’ retreat in 1995 and co-founded Human Rights Watch’s Los Angeles Committee in 1989.

Ms. Olson has been on many missions to the former Soviet Union, Eastern Europe, South America, South Asia, the Middle East, and Africa to look at problems associated with refugees, human rights, HIV/AIDS, and landmines. She and her husband Ron received the 2000 Humanitarian Award from the National Conference for Community and Justice in Los Angeles. She also received the inaugural 2005 Eleanor Roosevelt Award from Feminist Majority, the Community Achievement Award from Public Counsel, the Corita Kent Peace Award from Immaculate Heart College Center, and the Silver Achievement Award from the YWCA of Greater Los Angeles.

Human Rights Watch presented her its Allison Des Forges Award for Extraordinary Activism in 2010. She holds an honorary Doctorate of Humane Letters from California Lutheran University. She is a member of the Council on Foreign Relations and The Trusteeship. She serves on the Board of Directors for Direct Relief International in Santa Barbara.

The Pacific Council spoke with Ms. Olson to discuss her role in the early days of the Council, what role LA can and should play on the international stage, and what she hopes the Council will look like in the years to come.

Jane Olson: You’re talking about ancient history, but I do remember it quite well. My daughter got her Master’s in International Studies and she was at USC getting her Ph.D. in Economics. [The Pacific Council’s founding President] Abe Lowenthal hired her for his staff. The way I got involved was Abe called and asked if I could help organize their first members’ retreat. He had a small staff, and the woman who was in charge of it was completely overburdened. It was a stressful job.

When I got started, we had a short deadline, only a couple months before it had to be pulled off. Abe had very ambitious ideas and good speakers, and we really wanted it to be a success. I knew we needed expertise that we didn’t have on our staff, and we needed corporate support. I went to two personal friends, one was Shelby Coffey who was editor-in-chief of the LA Times and he got Times Mirror involved, and the other was John Bryson who was CEO of Southern California Edison. Both of them committed staff members to helping us. That was probably my best contribution to the Pacific Council. That first members’ retreat was what got the Pacific Council launched, and I do remember thinking that it was a big success.

Los Angeles is often called a cultural or intellectual desert, which I’ve never believed. The Pacific Council did fill a tremendous void. It’s always about creating community with people who share interests.

Los Angeles is often called a cultural or intellectual desert, which I’ve never believed. We moved out here in ’68 and found it had more to offer than we possibly had time to partake in. But I do think we were lacking a center where people who cared about and had knowledge in or experience with global affairs could come together and share ideas, relationships, and contacts. Almost right away, the Pacific Council became a West Coast version of the Council on Foreign Relations (CFR). It did fill a tremendous void. It’s always about creating community with people who share interests.

How has the Council evolved and grown since then?

Any organization moves in the direction of leadership. With Jerry Green, the mission is still the same but we’ve highlighted different kinds of expertise. One of the things that Abe was really interested in, because he was connected with a university, was having research fellows, most of them at USC who produced reports. Abe also was more interested in Latin America. But it was more intellectually based research and it appealed more to academics.

Jerry has expertise in Middle Eastern affairs. I knew Jerry from RAND. My husband chaired their board for a number of years and Jerry was head of their Middle East center. He came in with a different personality and goals and really built the membership. It’s expanded largely, tenfold or more. Jerry didn’t continue the research fellow roles, but he wanted to see impact. We didn’t just want to be a speaker’s bureau like the World Affairs Council. He wanted to see our meetings lead to something. So we come together, we hear from a panel or speaker about important issues, and then what? That’s what interested me, because I can read books and go to lectures and learn, but for me it’s always about gathering people to focus on some outcome that can make a difference and have impact on the world. Jerry had that focused energy.

How has the Council impacted your life over the years? How have you seen it impact other people’s lives?

For me, the most important thing always is community. When I started supporting Human Rights Watch, I built it as a family, with people who cared about it, enjoyed each other, and wanted to be together but for a higher purpose. That’s what I always wanted to do at the Pacific Council, also. It’s one of the centering institutions that brought together Eastside and Westside Los Angeles.

Our meetings in the beginning were mostly downtown, either at the offices or the California Club or hotels. Now it’s gotten to be much harder to gather people because of traffic issues. The Council became one of the important organizations for which people would go a long distance to get together downtown. I really liked seeing my Westside friends who would make the trek. The other thing we started doing was diversifying membership, especially age diversity.

I’ve been a longtime volunteer in many organizations and causes, primarily global affairs, but I felt that for any organization to survive and thrive you really need to bring in the next generation and mentor them. The Council has done a marvelous job at that. Of course, it’s always exciting and inspiring for us old timers to meet the next generation and see that they care and they have a lot of knowledge to bring to the table. There’s a kind of two-way mentoring: I learn from them, they learn from us, so that’s been very helpful and gratifying for me.

What role can and should LA play on the world stage?

When I was on the Council’s Board, I was chair of the Programs Committee, and we had a strategic planning process that the Board undertook. It was pretty serious and rigorous, trying to find a focus that made sense for LA. The city is a collection of small towns, as people say. The city center is hard to define. That gave us the idea that LA really is the most global city in the world. We’ve got the greatest diversity of almost every nationality, certainly in the Western Hemisphere and also Asia. I don’t think there’s a city that has the numbers of diversity that we have. So I really like the Council’s focus on LA as a global city.

For most of the boards I’ve chaired, they were all based in New York or D.C., so I was always going back to the East Coast and spending several days a week for board meetings, because most foreign policy was really European centric. We focused on NATO and our European allies. Clearly, the world has changed. The big player now is China but also all Asian countries are much more important on the world stage than they were even 10 years ago but certainly 20 years ago.

That means the West Coast is therefore more important as the launching pad. That makes LA a more important center for Latin America and Asia, particularly, while the East Coast is still more focused on Europe. That gave the Pacific Council some distinction and gave us an expertise that I wish had been called on more, quite honestly. Most of the media are headquartered in New York, the news starts at 6 a.m. on the East Coast, and when there’s a global event that needs experts on a panel, they tend to call on the same East Coast people all the time. That’s the one role I hope the Council will step into more in the future.

I would like to see more West Coast experts being engaged as commentators in the news. We have a lot to offer on the West Coast, and the Pacific Council should be one of those go-to organizations.

For instance, Jerry is probably one of the world’s experts on the Middle East. With all the problems with Syria, Lebanon, Yemen, throughout the Iraq War, Jerry should be called on first.

The other thing that goes along the same line is the fact that we have a number of ambassadors based in California, especially LA. Jerry’s had a strategy of inviting ambassadors to join the board, to do programs, to share their expertise. They’ve loved having this core institution as a gathering point for them to share their experiences. It’s sort of like soldiers who fought in a platoon together or a basketball team or football team. You share experiences that normal civilians don’t understand and you want to get together with your teammates, and ambassadors have those kinds of relationships vis-à-vis each other no matter which president or party they happened to serve. That’s been a wonderful thing that’s been birthed at the Pacific Council that I’ve enjoyed watching.

What do you hope the Council will look like in the years to come?

We’re going to learn from this COVID-19 episode. We’re going to have a lot more virtual meetings. We’re going to understand that the traffic in LA is literally a roadblock to getting together, if you’ll excuse the pun. I’m hoping to see greater diversity. I know the Council has programs to help fund younger members. There’s a real effort to bring in the younger generation. That means many of them won’t be able to give the financial support but I think we need to look for resources outside the organization.

Clearly, the topics are going to broaden. Instead of just classic foreign policy, we’re going to look a lot more at science, healthcare, and the issue of the Global South moving to the Global North because of climate change or poverty. There are a lot of critical crisis issues that the Pacific Council’s in a very good place to address.

Is there anything else you’d like to add about your experience with the Pacific Council?

It’s been one of the highlights of my life being involved. I’m very proud of everything I read about. I would like to see more West Coast experts being engaged as commentators in the news. There’s an East Coast/West Coast bias, but we have a lot to offer on the West Coast, and the Pacific Council should be one of those go-to organiztions.