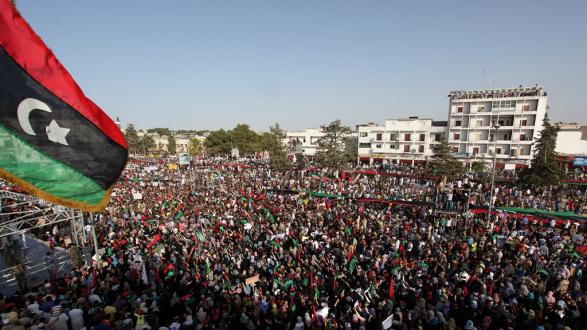 The Arab Spring was not an isolated event with specific beginning and end dates, but rather part of a larger political, social, and economic upheaval across the Arab world, according to the closing plenary session at Spring Conference 2016.

“The Arab Spring began with a wave of democratic uprisings across the Arab world in late 2010,” said Kraft. “In the years since it has sometimes been called the Arab Winter because of the rise of authoritarianism and religious extremism. What lessons have we learned?”

O’Connor, who was UK Ambassador to Tunisia from 2008-2013, said the main lesson for him was that “really big change can happen really quickly.”

He said that Tunisia did not seem like a country on the edge of revolution. That scenario was “as likely as a war between Los Angeles and Santa Monica,” he said. “We had all the analysis, but nonetheless it came as a complete surprise. So it wasn’t a failure of information but of imagination."

If all you know is what you don’t want, you get rid of that thing, and then it’s pretty difficult to establish the rules for the next thing.

Another lesson he learned is that political revolution doesn’t go well unless someone is articulating what the revolution aims to achieve.

“People knew Tunisia wanted rights, free speech, but there were no leaders articulating an ideology that people were protesting for,” he said. “If all you know is what you don’t want, you get rid of that thing, and then it’s pretty difficult to establish the rules for the next thing.” 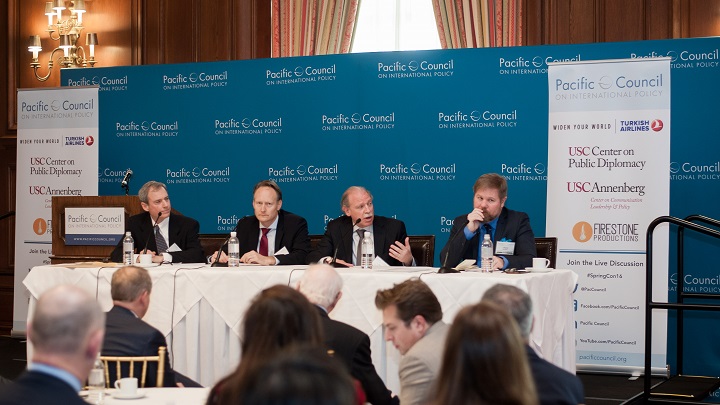 “It’s more useful to look at these two as a larger upheaval in the Middle East, of which the Arab Spring is a symptom of a deeper cause of what’s going on in the region,” said Feierstein.

He added that it’s wishful thinking for Americans to say the Middle East doesn’t matter anymore. The United States is and will remain dependent on Middle Eastern oil and the stability of Gulf oil markets for the foreseeable future.

Kilcullen, the founder and chairman of Caerus Global Solutions, provided some context and history of the Arab Spring’s pivotal moments, from its hopeful beginnings and the U.S. intervention in Libya in 2011 to the killings of Muammar el-Qaddafi and Osama bin Laden, to the rise of the Islamic State.

... We're now in an environment where the dragons are back, and we’re dealing with both dragons and snakes at the same time and in many of the same places.

He quoted former CIA director Robert James Woolsey, who responded in his 1993 confirmation hearing to a question from John Kerry about the threats the United States faces now that the Soviet Union had collapsed: “We have slain a large dragon, but now we find ourselves in a jungle filled with a bewildering variety of poisonous snakes, and in many ways the dragon was easier to keep track of.” Kilcullen, who spent much of 2011 in Iraq and Mogadishu, said that from “October 2011 onward, we’re now in an environment where the dragons are back, and we’re dealing with both dragons and snakes at the same time and in many of the same places.”

O’Connor explained the deep cause of the existence of violent extremism as a result of extractive (rather than inclusive) states, which on the one hand do not allow public opposition, and on the other hand do not provide basic governance and services.

Eventually we will defeat ISIL…but the likelihood is unless you address the deeper core issues you will simply see the rise of another group.

Feierstein stressed that military action alone is not going to defeat violent extremism, which he argued comes from deeper roots in society.

“Until you address those deeper failures you’re not going to see the disappearance of violent extremism,” he said. “Eventually we will defeat ISIL… but the likelihood is unless you address the deeper core issues you will simply see the rise of another group.”

One member of the audience asked the panel if they thought democracy is even possible in the Middle East. 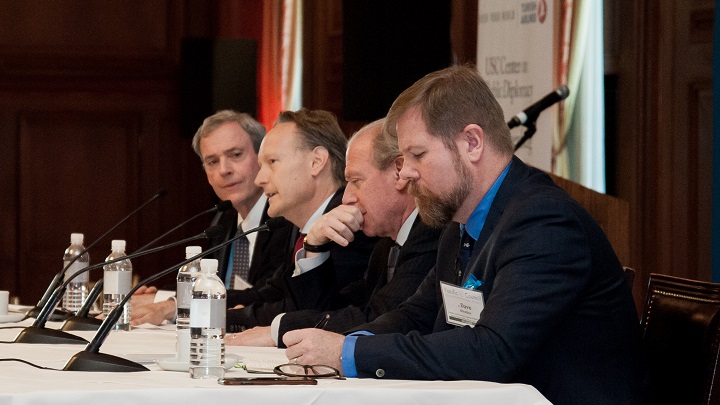 “On a conceptual level, those who doubted that people in the Middle East want the same freedoms as the rest of the world have been proven wrong by events in Syria, Tunisia, and other countries,” O’Connor replied. “The best outcome we can imagine is a situation where the people of those countries get what they actually want, which is also fundamental to their stability.”

Feierstein answered that democracy is not simply about voting - it’s about the institutions that support democratic decisions and create economic and political structures that allow democracy to prosper.

“Democracy is hard work,” he said. “It takes time. Realistically if we’re going to stick with it, we have to recognize that this is a 15 to 20 year project.”

Kilcullen said the answer to the question depends on what we mean by "democracy."

“If by democracy you mean an inclusive government that governs in response to the wishes of its population, that tries to include their points of view, then absolutely, there’s no doubt whatsoever that all these people in these countries want that,” he replied. “If you mean the forms of electoral democracy, like the UK’s parliamentary democracy or America’s congressional or presidential government, then probably not. If you mean U.S. troops coming in, overthrowing a regime, and imposing democracy at the point of a gun, then: hell, no.”