How China is Tightening Its Grip on the South China Sea 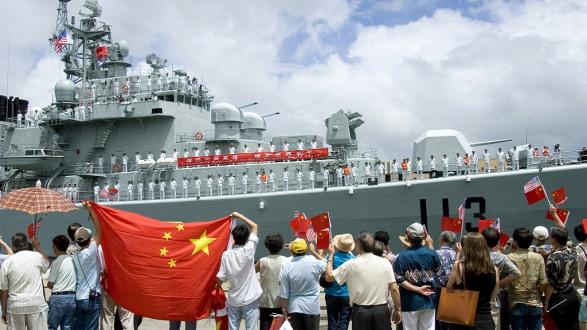 Ford is the director of political-security affairs and the Richard Holbrooke Fellow at the Asia Society Policy Institute. Hiebert is a senior adviser and deputy director of the Southeast Asia Program at the Center for Strategic and International Studies. The conversation was moderated by Eleanor Albert, online writer and editor at the Council on Foreign Relations.

"China has divided Southeast Asian countries," said Ford. "That lack of cohesion and unity between the countries of the Association of Southeast Asian Nations (ASEAN) has been an effective tool in preventing ASEAN from speaking with one voice and taking a stronger opposition to China’s policies in the South China Sea."

For the past eight years, tensions surrounding maritime territorial and sovereignty disputes in the South China Sea have become a pressing challenge for U.S. policy makers. In the wake of the UN tribunal ruling on the South China Sea last summer, the challenge of managing the tensions while defending U.S. interests has intensified, raising questions about U.S. diplomacy and security commitments in the region, and about the implications of China’s emergence as a regional power.

"The lack of cohesion and unity between the countries of ASEAN has been an effective tool in preventing ASEAN from speaking with one voice and taking a stronger opposition to China’s policies in the South China Sea."

"In the last few years, China has flip-flopped between a charm offensive and a more coercive approach to its Southeast Asian partners," said Ford.

Hiebert agreed, adding that so far this year, China has been fairly quiet in the South China Sea, mainly because most countries have stopped provoking China in the region.

"All the Southeast Asian countries see China’s economic growth as a major driver in their own economic growth," he said. "What these countries want is to depend on China for economics and look to the United States for security."

Ford said that it is no secret that China’s military capabilities have been advancing rapidly over the last few years.

"Philippine President Rodrigo Duterte is intent on improving relations with China, so he basically shelved The Hague tribunal’s South China Sea ruling. Nobody is pressing the ruling these days."

Hiebert offered hope that the recent attacks by Islamic radicals in Mindanao could provide an opportunity to rebalance the U.S.-Philippine relationship under President Rodrigo Duterte. He also pointed out that although The Hague’s Permanent Court of Arbitration ruled in favor of the Philippines in its case against China’s territorial claims in the South China Sea last summer, China rejected the ruling and so did the Philippines after Duterte’s election.

"Duterte is intent on improving relations with China, so he basically shelved The Hague tribunal’s South China Sea ruling," he said. "Nobody is pressing the ruling these days."

Ford added that it was "a huge missed opportunity that the United States did not get an international coalition on board to support The Hague tribunal’s ruling."

Hiebert said it would be helpful to all parties involved if the United States would outline its interests and strategy in the South China Sea in general.

"The South China Sea is important because $5 trillion worth of trade flows through," he said. "It plays a critical role in the global economy."

"In an area of disputed waters without clear rules of the road, nations may inadvertently walk into an incident that could spin out of control."

Ford agreed, adding that post-election, people are "increasingly uncertain what U.S. policy towards Asia is going to look like. Countries in the region are less likely to push back on China if they are uncertain that they can rely on the United States. Unless the Trump administration comes up with a strategy to push back against China, we are not going to change the view that we are unreliable. Freedom of Navigation Operations should not be the entirety of U.S. policy. Relying on ships will not change the situation in the South China Sea."

Historically, she explained, the United States has had a vested interest in peace and stability in the South China Sea.

"U.S. interests are in keeping the sea lanes open and ensuring disputes are resolved peacefully," she said. "The United States does not take a position on the sovereignty of the territory under dispute itself, but on how it wants to see the dispute resolved."

She added that while neither China nor the United States are itching for conflict, there is a high risk of miscalculation, especially in the South China Sea, echoing comments made by Dr. Graham Allison in a recent conversation with Pacific Council members.

"In an area of disputed waters without clear rules of the road, nations may inadvertently walk into an incident that could spin out of control," Ford said.

The Pacific Council’s Summer Teleconference Series continues with discussions about the conflict in Yemen on July 26; South Asia’s water crisis on August 10; the U.S.-Russia relationship on August 24; and Germany’s upcoming election on September 21.