A War Between China and the United States? It’s Possible 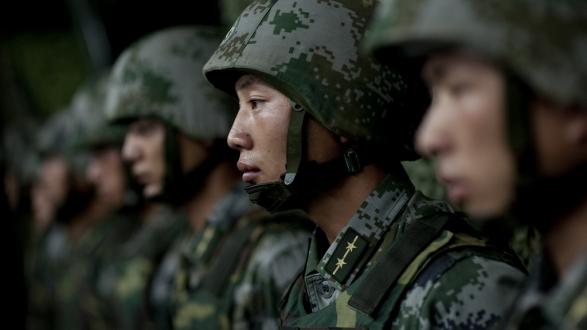 No one wants war between China and the United States, but it is still a distinct possibility, Dr. Graham Allison told Pacific Council members in a discussion on how the two nations can avoid conflict.

Allison is the Douglas Dillon Professor of Government and the director of the Belfer Center for Science and International Affairs at Harvard University’s John F. Kennedy School of Government. He is the author of a new book, Destined for War: Can America and China Escape Thucydides’s Trap? The conversation was moderated by Dr. Carol Wise, an associate professor in the School of International Relations at the University of Southern California.

"War between the United States and China could be the worst we’ve ever seen before," said Allison. "If we were to have a war with China, Walmart would have no goods to sell, Chinese factories would be making a bunch of stuff that nobody can buy, and the United States would not be able to get loans to cover our deficit. We are highly economically intertwined. War would mean Mutual Assured Economic Destruction."

Allison laid out the premise that China and the United States are set up to fall into "Thucydides’s Trap," a deadly pattern of structural stress that results when a rising power challenges a ruling one. Allison argued that unless China is willing to scale back its ambitions or Washington can accept becoming number two in the Pacific, a trade conflict, cyberattack, or accident at sea could soon escalate into all-out war.

"Just like World War I, one small thing can set off a chain reaction that could lead to war," he said. "Beneath the noise and news of the day—of which there will always be an infinite amount--there is a concept or lens for helping us look through that for the structure or even the substructure of international politics today, and that is Thucydides’s Trap."

"War between the United States and China could be the worst we’ve ever seen before."

He added that the pattern of a rising power threatening an existing one has been repeated throughout history, with the result being war more often than not.

"In the book, I look at the last 500 years of history and I find 16 cases in which a rising power threatens to displace a ruling power," he said. "In 12 of those, the outcome is war. So war being ‘inevitable’ is an exaggeration. It’s just very likely. Business as usual, in the case of a rising China that’s on a collision path with a ruling United States, will likely produce history as usual, in which the case will be a catastrophic conflict."

The parallels between previous cases and the rise of China and its impact on the United States and the global order are too similar to ignore, Allison argued. However, he added, that does not mean China and the United States must make the same mistakes as previous competing powers. He identified the U.S. withdrawal from the Trans-Pacific Partnership as one such mistake, because it will allow China to fill the vacuum in the region.

"What Asia will end up with in terms of a trade agreement is, in effect, China writing the rules," he said. "And when China writes the rules, the rules will be more advantageous to China."

China has also been pushing for more influence on the international stage.

"What we’re witnessing is the fragmentation of international institutions that were created after WWII and that have been the framework that provided the economic order that’s been fantastic for growth for everybody," he said. "But as China has entered the scene and become a bigger and stronger player, just as Thucydides will tell us, they’ve said the rules of the game—such as their shares in the IMF and other multilateral institutions—are not fair. They say, ‘We’re bigger, we’re prepared to pay more, we want more votes.’ And the United States has said, ‘No, thank you.’ My bet is that we’re going to see more fracturing of these international institutions as China demands and basically takes a larger role, especially if the United States clings to the status quo."

Allison pointed out that the rise of China happened so fast that U.S. officials have not yet had time to be astonished, let alone react.

"This man has iron in his soul. I think he’s the most impressive international leader I see on the stage today."

"China is the number one trading partner of everybody, and anybody it’s not yet, they will be soon," he said. "The Chinese development banks are four times as large as the World Bank. They’ve basically taken over that business. Every two years, the increment of growth in China has been bigger than the economy of India. The ‘slowing down’ China continues to grow more than three times faster than the recovering United States."

Additionally, Allison said nationalism is alive and vigorous in China, especially among the younger population who are very proud to be Chinese.

"They’ve seen their country—which was nowhere—become a very serious player," he said, in large part because of President Xi Jinping. "This man has iron in his soul. I think he’s the most impressive international leader I see on the stage today. He and his team have undertaken an unbelievably ambitious agenda."

For the United States, Allison said the temptation is to cling to the status quo, a strategy he does not believe will work.

"If the fundamental underlying structures have changed, you can’t hold on to the status quo," he said. "So you have to learn to adapt. Luckily Americans are extremely adaptable people. That’s one of the great assets of the United States."

Ahead of this event, Dr. Allison wrote an article for the Pacific Council’s Newsroom, adapted from his book, about the potential for conflict between China and the United States. Read it here.