Was Obama’s Foreign Policy a Success? Most Members Say Yes 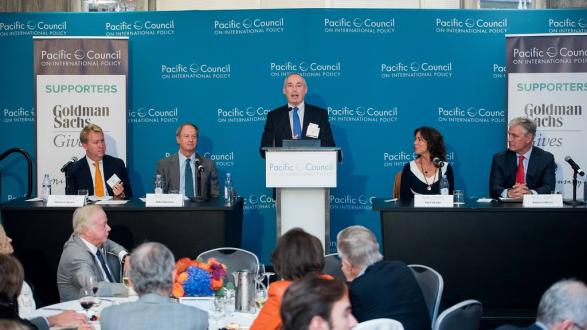 Watch the entire debate below and read about key highlights:

Members Weekend attendees voted on the debate question in both a pre- and post-debate poll on the Pacific Council mobile app. Before the debate, 56 percent voted "yes" and 44 percent voted "no."

Spence laid out the differences in terms of America’s standing in the world between when Obama took office and when he left:

O’Brien argued that the world Obama left behind was more dangerous, not safer:

Emerson argued that Obama restored America’s voice as a moral authority in the world:

Schake laid out what the world would have looked like if the United States had eight years of a different foreign policy than Obama’s:

Answering the same question after the debate, "Was Barack Obama’s foreign policy a success?",  61 percent of members voted "yes," and 39 percent voted "no."

Read more about this year's conference at the Members Weekend 2017 website. Watch videos and read summaries of Representative Karen Bass' keynote address, the plenary on the future of automation, Jerry Green's remarks on the Iran deal, an interview with General Robert B. Brown, and insights from other Members Weekend discussions. Check out photos from the conference on our Flickr page.