Representative Karen Bass: Africa is a Land of Opportunity 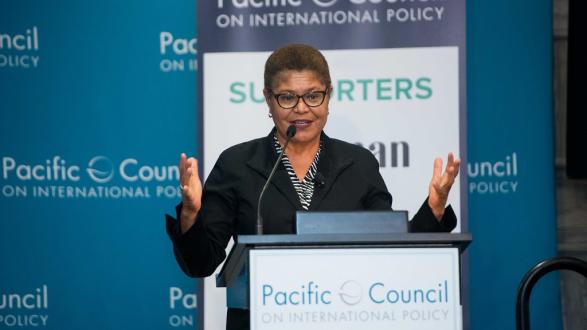 The U.S. government and U.S. companies need to step up their economic activity on the continent of Africa as a way of strengthening the capacity of Africans to resolve long-standing issues on their own, said Representative Karen Bass (D-CA) during her keynote discussion at Members Weekend 2017.

Watch the entire conversation and read key highlights below:

"In Congress, Africa is actually a bipartisan issue," said Bass. "I work really well with my Republican colleagues on Africa. Even so, my colleagues don’t know much about Africa. Our perception of Africa is that it’s a continent of conflict, chaos, constant crisis, corruption, incompetence, and one that always needs our charity. One of the reasons I’m in Congress is to work to change our perception of the continent."

When it comes to Africa, Bass pointed out that the United States is behind the rest of the world.

"The rest of the world knows that Africa is a land of opportunity," she said. "The rest of the world knows how big Africa is; many Americans don’t realize that. You can fit the United States inside Africa three times. There are 54 countries in Africa. We tend to focus on the ones that are problematic, but we don’t realize that the majority of the continent is actually peaceful. The continent is poor. There are structural problems that need to be resolved. Much of the continent suffers from the vestiges of colonialism. But China, Russia, India, and Brazil are all very clear about the opportunities that the continent provides."

"The model is building the infrastructure and capacity of Africans so they can do things for themselves."

On the security issues facing Africa, Bass said that the United States needs to start looking at them a little differently.

"Some of the issues are ideological, such as Boko Haram, a group that wants to take us back to the 10th century," she said. "But a lot of the young people that get involved in groups like Boko Haram are doing so for non-ideological reasons. You have to address the root causes of why there are these security issues in the first place. Africa is an overwhelmingly young continent. If we don’t figure out how to address the root causes and the economic situation, then it does lay the groundwork for terrorist organizations to do recruitment."

On the issue of U.S. foreign aid, Bass said that the United States should continue to provide funding, but in a different way.

"The model is building the infrastructure and capacity of Africans so they can do things for themselves," she said. "One of the ways our resources should be used is to help organizations like the African Union and the regional economic communities strengthen their own capacity."

Bass was interviewed by Mr. Grant Harris, CEO of Harris Africa Partners LLC and a former special assistant to the president and senior director for African affairs at the White House. Read his recent report, Why Africa Matters to U.S. National Security.

Read more about this year's conference at the Members Weekend 2017 website. Watch videos and read summaries of the plenary on the future of automation, Jerry Green's remarks on the Iran deal, the debate about President Obama's foreign policy, an interview with General Robert B. Brown, and insights from other Members Weekend discussions. Check out photos from the conference on our Flickr page.