Iran Deal is Imperfect, But Decertification was a Mistake 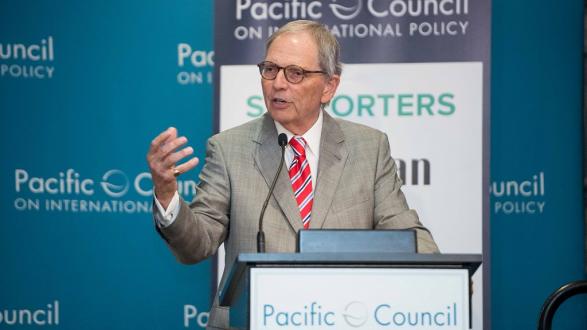 The following is an interview with Pacific Council President and CEO Dr. Jerrold D. Green on Iran following his remarks at the "Under Threat? U.S.-Iranian Relations & the Future of the Iran Deal" panel at Members Weekend 2017.

Pacific Council: Now that President Trump has decided to decertify the Iran nuclear deal, what happens next? And was decertification a good choice at this time?

Dr. Jerrold D. Green: As is widely known, even by its architects, the Iran nuclear deal is imperfect. These imperfections, however, do not justify decertification. For casual observers the deal can be confusing to understand. Many think—incorrectly—that this deal was meant to cover all aspects of Iranian policy. In point of fact, the deal was more narrowly focused exclusively on impeding Iran’s development of a nuclear weapons capability based on aggressive enrichment.

It is important to understand who the deal architects were. They were the P5 + 1 countries: Russia, China, the United States, the United Kingdom, France, and Germany. It is especially noteworthy—and indeed a remarkable accomplishment—that Moscow, Beijing, and Washington were able to agree on anything, especially in light of the current global political climate. This is not simply an American deal. The United States had valued partners.

Why would Washington willingly walk away from a position of global leadership that is so valuable to the United States?

President Trump’s decision to decertify was not the right choice. Why would the United States want to undermine a deal it and others had worked so hard to craft, especially since it appeared to be working and Washington’s partners oppose decertification? And why would Washington willingly walk away from a position of global leadership that is so valuable to the United States?

Generally, the expert community believes that Iran is in compliance with the narrow expectations of the deal. Neither Secretary of State Rex Tillerson nor Secretary of Defense James Mattis supported decertification and instead favored honoring the deal.

So the question is, on what basis did President Trump decide not to certify? This may have less to do with Iran’s nuclear program itself and more to do with domestic U.S. politics. And it is now up to Congress to deal with this issue which is certain to occur in a highly politicized fashion. And for its part, Iran has already said it will not agree to renegotiate the deal.

If President Trump had continued to certify the deal, would that have positively influenced Iran’s regional activities? And what does decertification mean for the United States in the region and globally?

Iran’s regional misbehavior is well known and problematic. What Tehran is doing in Iraq, in Yemen, and in Syria is hardly a secret and is antithetical to Washington’s views and regional expectations. The original architects of the nuclear deal were not unaware of these trends. At the time however, the hope was that providing Iran some financial relief and working towards lessening its global isolation would allow it to gradually reenter the global system in a more constructive fashion. The long-term hope was to subtly encourage the evolution of a more constructive and less ideological Iranian political order in a fashion that would in fact reflect the wishes of a majority of the Iranian population itself.

The problem is that those who oppose the nuclear deal have never articulated what alternatives exist or their strategic objectives. And for their part, the Iranians continue to wonder, "What do the Americans want from us? How do we satisfy U.S. demands?" In simple terms, it is not at all clear what the United States expects from Iran. Decertifying this deal sends exactly the wrong signal, especially at a time when Washington’s own lack of a grand strategy confuses friends and foes alike. For as Iranian Foreign Minister Mohammad Javad Zarif recently opined, "an American promise can only be expected to last as long as the administration that makes it." This seemingly accurate view is becoming commonly held throughout the global political order.

By decertifying the Iran deal, the implications for the United States elsewhere are equally negative. Dealing with U.S. allies and rivals—including North Korea—becomes that much more difficult as Washington loses considerable credibility if it does not adhere to its commitments and value diplomatic solutions to political and security problems.

President Trump said that the Iran deal is the worst deal ever, but for some reason he seems to feel that way about every deal that he has not personally made, despite the fact that after almost a year in office he has yet to make any significant deals—the Iran deal, NAFTA, and the Paris Climate Accord are all under attack by Washington.

Experts say Iran is in compliance with the deal, but do all Iranians support the deal?

Within Iran there are two major camps: the group that negotiated the deal with the P5 + 1 and those who opposed it including segments of the religious sector, the Revolutionary Guard, the intelligence community, and others. The Iranian interlocutors of the P5 + 1 who supported the nuclear deal invested significant political capital and took a huge risk in supporting it.

Iranian President Hassan Rouhani’s administration believed that if this deal could be actualized it would improve Iran’s global political and economic standing, lessen its isolation, and thus undercut Iran’s more extreme elements who directly benefit and even profit materially from Iran’s isolation. The more moderate Iranians who support Rouhani are evidence of why this deal deserves to be supported although its ancillary benefits need time to gradually evolve.

An isolated and radical Iran benefits no one. Given time, Iran’s domestically unpopular political order may well be moderated. Many Iranians would hope that Iran’s more extreme religious elements will have their power curtailed and that Iran’s limited democratic character would expand, thus allowing the Iranian people to have a greater voice in determining their own fate. Insulting and humiliating Iran will not work. When dealing with Iran, one needs to be strategic and smart.

What do you expect the other signatories to the deal to do next?

Assuming Congress decertifies the deal, if the other signatories to the deal are wise, they will simply carry on without Washington. U.S. business competitors around the world will benefit while the United States is left sitting on the sidelines watching. There are of course other possibilities as well. The Iranians could move in the direction of even greater extremism. They could eventually replace moderate leaders like Rouhani with more extreme ones like former President Ahmadinejad, and the current and next Supreme Leader could become far more politically challenging to deal with than he has been of late.

Dr. Jerrold D. Green is the president and CEO of the Pacific Council on International Policy. Read more.