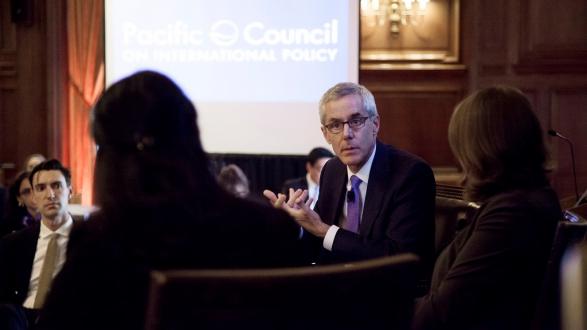 This year’s Spring Conference featured panel discussions, roundtable dialogues, and a keynote interview with Representative Ted Lieu (D-CA). The conference also included three plenary sessions: a discussion on the EU’s struggle for stability; an examination of the future of war; and a look into the operating environment for the U.S. Marine Corps.

Other sessions included discussions on U.S.-China relations, challenges and opportunities for public diplomacy, the state of the free press around the world, NAFTA renegotiations, emerging issues in the Middle East, and immigration policy in the United States.

What follows are just a few of the many notable insights from the conference.

"I believe the United States needs to engage with China," said Hachigian. "We have important differences on human rights, cyber security, and other issues, but those are not reasons to hold our relationship hostage. While cooperation is the only real sensible option, we have to be very firm when our interests do differ. If the United States does not stand up for individual liberties, liberal democracy, and the rule of law, no one else is going to do it." 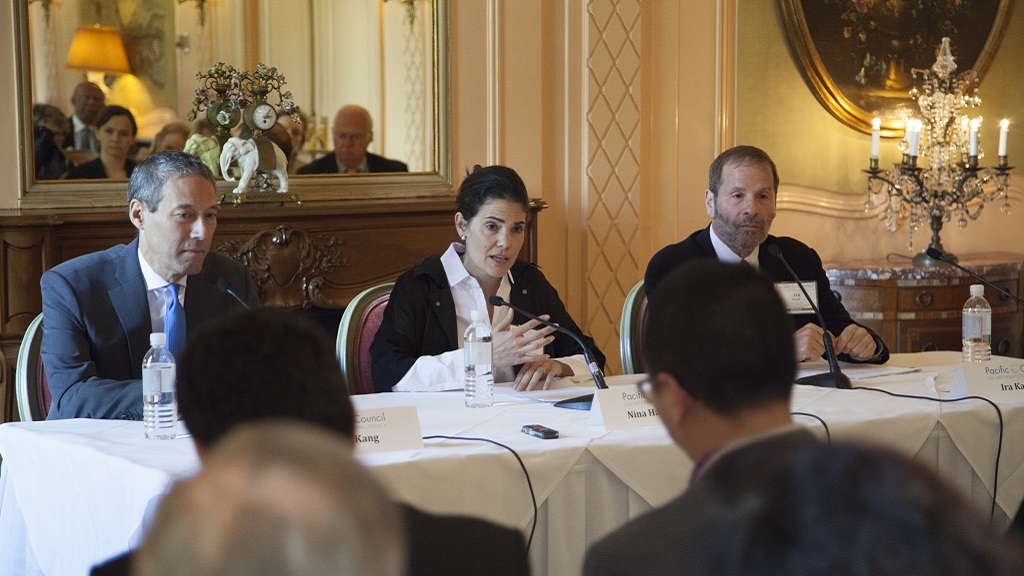 Kang said that despite popular opinion, China is not a problem to be solved.

Challenges and Opportunities for Public Diplomacy

Moderated by Jay Wang and Pamela K. Starr of the USC Annenberg School, this panel featured Fadi Chehadé, chairman and CEO of Chehadé & Co., and Kimberly Marteau Emerson, board member of Human Rights Watch. This session was co-sponsored by the USC Center for Public Diplomacy.

"While we have invested a lot in hard power, we should not overlook soft power tools to dissuade extremist ideologies and narratives," said Wang. "Increasingly we are seeing state actors using disinformation campaigns to influence elections worldwide. We should not be solely focused on countering narratives of others; our task is to broadcast a strong positive narrative of our own." 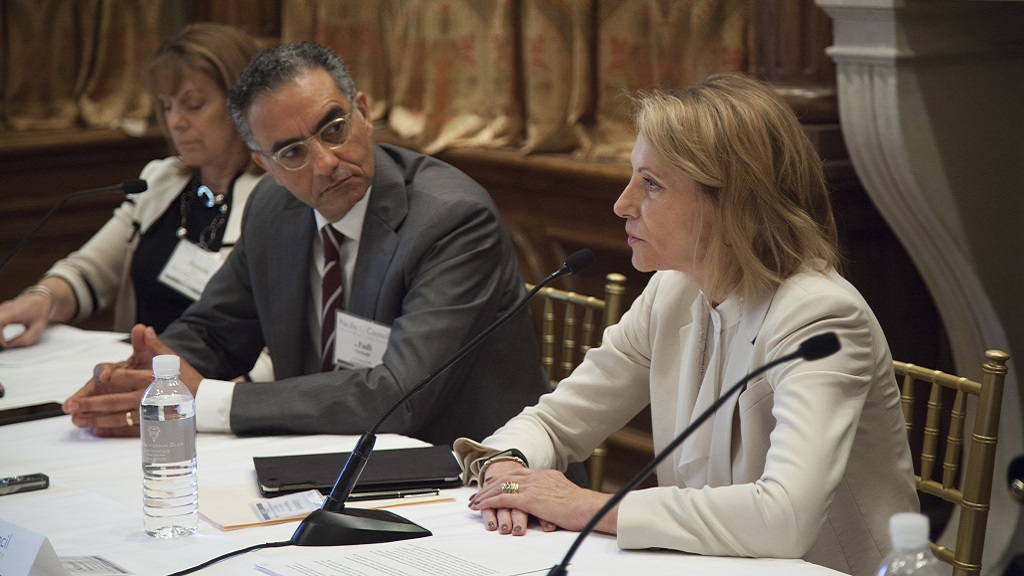 "Human rights have been a pillar of foreign policy in both Democratic and Republican administrations since Jimmy Carter," she said. "I take the position that President Trump’s actions have seriously weakened America’s global image. They have undermined its moral authority to promote, project, and protect human rights, diminishing its core soft power tools."

"We should not be solely focused on countering narratives of others; our task is to broadcast a strong positive narrative of our own."

Chehadé discussed how public diplomacy helped shape the internet and how it is governed today.

"Public diplomacy tools helped save a ‘One Internet’ system, rather than having many different internets around the world," he said. "Going forward, we need innovation in governance just like we have innovation in technology. Just about everything will be talking to the internet in the near future."

Emerging Issues in the Middle East

"Israel has been able to improve relations with a number of different countries," said Efron. "It maintains peace agreements with Egypt and Jordan. There is also peace with Saudi Arabia and the United Arab Emirates, and in Africa, there are indications of rapprochement between Israel and Chad and Mali, two predominantly Muslim countries. They’re also advancing ties with Indonesia. And Israel and Turkey reconciled in the summer, ending a six-year rift between those two countries. Meanwhile, we are likely going to see a continuation of U.S. policy regarding the Israel-Palestine issue." 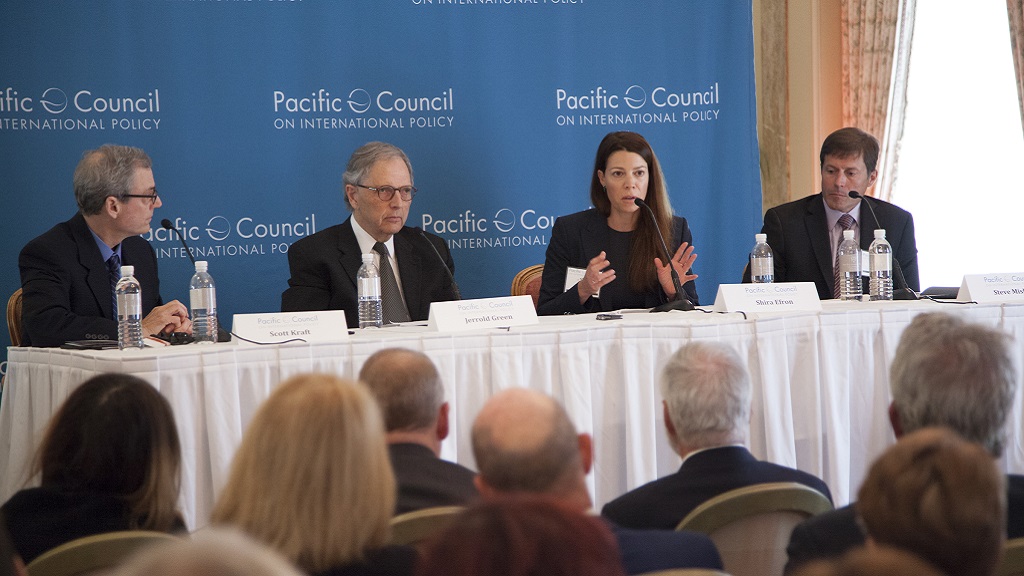 Green argued that the current administration must be clear about U.S. policy toward the Middle East.

"Take the Iran nuclear deal as an example," he said. "Either you tear it up, which is not going to happen, or you support it. To basically undermine it while perpetuating it is the worst of all possible worlds."

Miska said he is not seeing much difference in U.S. policy toward the Middle East between the Trump and Obama administrations.

"There is an amazing consistency in U.S. foreign policy from administration to administration," said Miska. "From a military perspective, I don’t see a real change in the Trump administration’s policy in northern Iraq and Syria with respect to ISIL. It is only a matter of time before militarily they are defeated. The real challenge is governance after the fact, the humanitarian fallout, and how to broker an agreement amongst the elites."

The State of the Free Press Around the World

Moderated by Paul Rosen, former chief of staff at the U.S. Department of Homeland Security, this panel featured Rory Carroll, U.S. West Coast correspondent at the Guardian, Kimberly Murphy, assistant managing editor of the foreign and national desk at the Los Angeles Times, and Vera Zakem, director of strategic partnerships and project director on European Stability at CNA’s Center for Strategic Studies.

"I’m more worried about the state of the free press both in the United States and globally than I have been in 35 years as a journalist," said Murphy. "There are more journalists in prison around the world right now than we’ve seen in our lifetime. The recent crackdown in Turkey has resulted in dozens and dozens of people put in prison. In Russia, we see not only most independent media squelched, but also journalists murdered. In Mexico, journalists are under threat for investigating both the drug cartels and corruption in the government.  Domestically, the journalism industry is facing some of the biggest hurdles we’ve ever had, including financial issues and getting access to information." 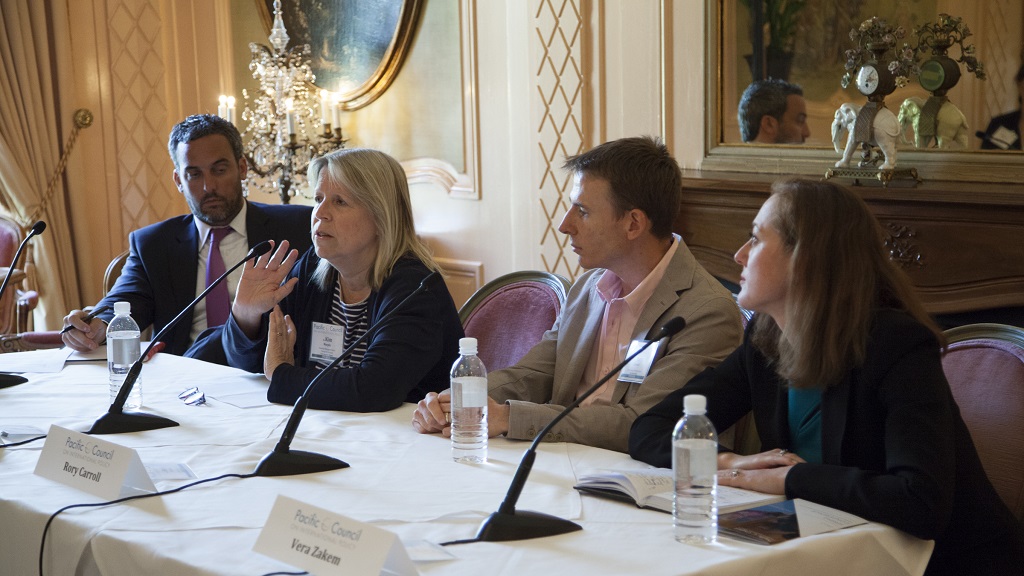 "These are grim times for the industry," he said. "Our economic model is slowly imploding. We can’t pay our bills, which inhibits what we can do and makes us much more vulnerable to all sorts of pressures from governments and others. But there has to be hope. We’re trying to use innovative thinking and optimism to find ways around this. We are trying to adapt to a very challenging environment."

Zakem pointed out that many developing countries have a weak media environment, which has fed the rise of fake news.

"There’s a lack of professional skills and lack of trust in the journalistic profession," she said. "Adding to that, there’s a lot of corruption and a lack of transparency in authoritarian regimes. In that environment, there’s a propensity for fake news and propaganda. We have to rely on good investigative journalism to determine whether a story is false. Investigative journalism is critical to combating fake news."

"The Trump administration needs to recognize the facts on the ground regarding immigration," said Shusterman. "It’s not as simple as building a wall."

"Economists have longed observed the beneficial impacts of allowing refugees and immigrants to work in the economy."

Peters pointed out that nativism is not new and cautioned against portraying Americans as more nativist than they have been in the past.

"We had extremely racist-based national origin quotas in the early 20th century, such as the Chinese Exclusion Act, so I think we’re actually generally more supportive of immigration and a more tolerant society today," she said. "But what has happened is we don’t have the business side reining in the nativists as well. There are many industries that once upon a time were the major drivers of support for immigration that either just don’t exist or have become extremely protective, high-tech firms that don’t need low-skill migrants." 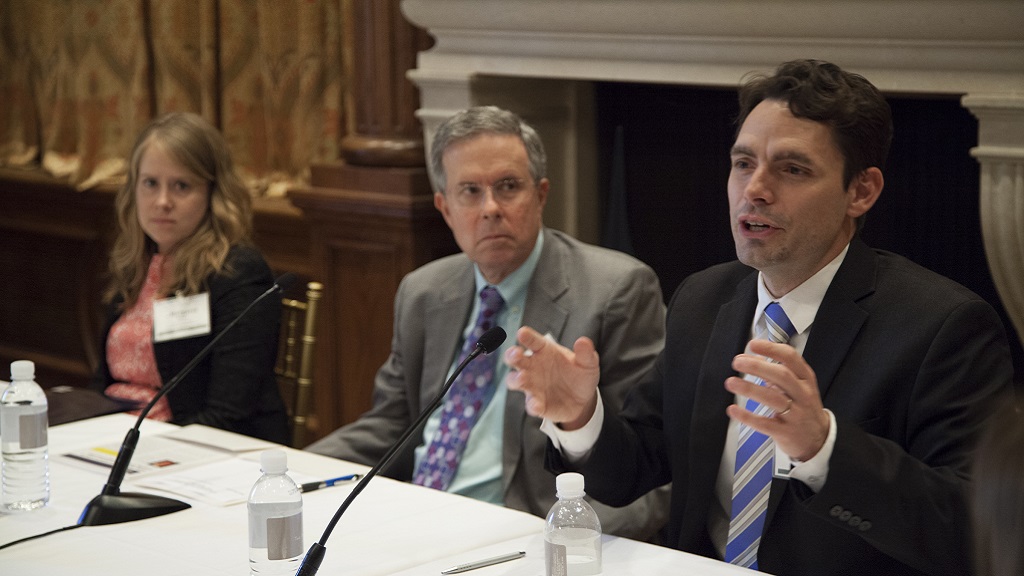 Miller proposed the creation of special economic zones in certain countries where migrants and refugees are allowed to work, even if national rules do not allow them to work.

"What we’re trying to do at Refugee Cities is take the concept of special economic zones for migrants to countries that are hosting huge refugee populations—Turkey, Jordan, Lebanon, northern Africa—where the politics just aren’t there to allow these people to work in these countries," he said. "Economists have longed observed the beneficial impacts of allowing refugees and immigrants to work in the economy. They create more jobs over the medium to long term than they take."

"While Mexico expressed its willingness to renegotiate the North American Free Trade Agreement [NAFTA]—there is, after all, a lot that can be improved in this agreement—the Peña Nieto administration made it clear that it would walk away from the negotiations if the United States attempted to raise current tariff levels, impose new quotas, or if the renegotiations did not benefit Mexican national interests," said Starr. "Mexico has been reminded by U.S. actions and administration rhetoric that the United States can be the greatest threat to Mexican well-being, even as it remains the greatest potential opportunity." 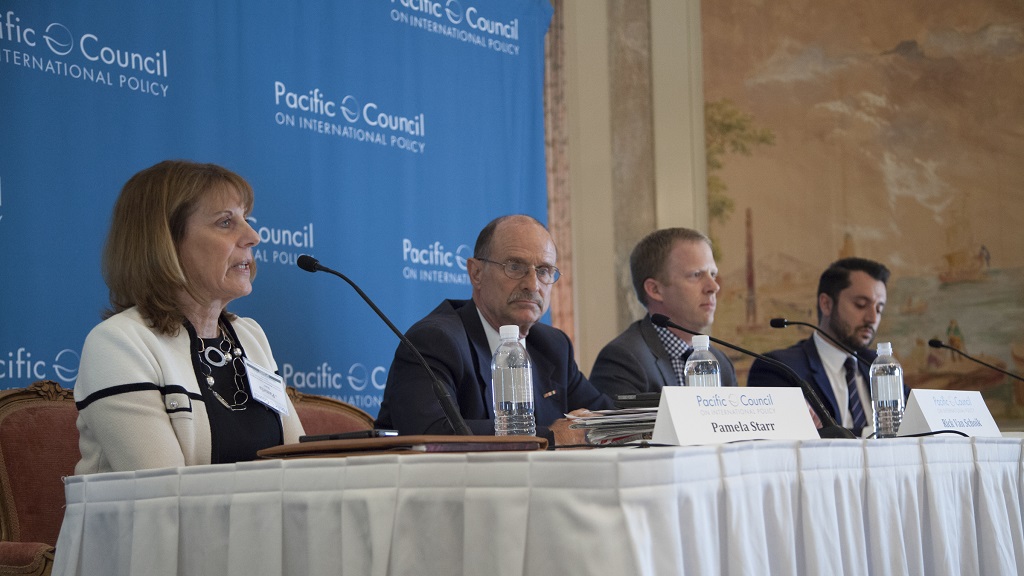 Van Schoik said that undoing NAFTA would be very complicated and potentially impossible, and also touted the benefits of the trade agreement.

"It has been said that NAFTA was the greenest trade agreement ever and we have evidence of that," he said. "If the United States, Canada, and Mexico can host the World Cup in 2026 as three nations, why can’t we get along as three nations?"

Eide argued that trade between the three countries is "absolutely crucial" for all three, adding that there is a lot at stake for Los Angeles in particular.

"Mexico has been reminded by U.S. actions and administration rhetoric that the United States can be the greatest threat to Mexican well-being, even as it remains the greatest potential opportunity."

"It is worth emphasizing that both Mexico and Canada are not waiting around, but proactively working on a strategy to both try to salvage and build their trade relationship with the United States while also diversifying beyond U.S. markets,"” he said. "I think having NAFTA is far better than not having NAFTA. I’m concerned about walking away from that agreement because I think there’s a lot that it helps to do to foster trade between our three countries. There are opportunities to further increase particularly environmental and labor provisions, and to help bolster the digital economy that’s so important to Los Angeles."