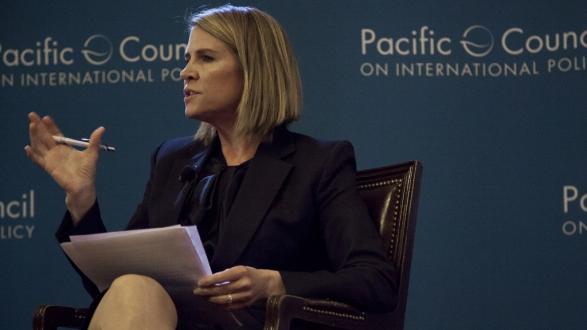 Europe is facing internal and external pressures that could undermine EU stability and trigger a reversion to a nation-centric continent, Ambassadors Colleen Bell and John Emerson told Pacific Council members at Spring Conference 2017.

"Europe is at a dangerous inflection point," said Bell. "It is undergoing a series of fractures at the supranational, EU, and eurozone levels between the European nation states and their leaders. The severity of the crisis is fueling populists and euro skeptics and challenging the EU’s coherence and effectiveness as a partner for the United States, particularly on issues such as trade, migration, Russian aggression, ISIL, and climate change."

Emerson said that "most Europeans feel about Brussels the way that most Americans—and certainly those who voted for Donald Trump—feel about Washington, D.C. Brussels is way less transparent and harder to understand and decipher than D.C. is."

Bell said that any meaningful discussion about the EU needs to include representation from some of the smaller counties.

"What we relied on, the unifying influence from what was the big three—France, Germany, and the UK—no longer exists, while smaller countries—Hungary, Slovakia, Czech Republic, Poland—are coming together and digging their heels in on issues like compulsory quotas for refugees," said Bell.

Emerson offered lessons learned from Germany’s attempt to integrate refugees into its society.

"The severity of the crisis is fueling populists and euro skeptics and challenging the EU’s coherence and effectiveness as a partner for the United States."

"The fundamental lesson of integration is that it requires energy and effort both on the part of the host nation and on the part of the refugee," he explained. "First, the refugee needs to learn the language. Second, get the kids into school as quickly as possible. Kids tend to assimilate more quickly, they root for the local teams, they learn the language without an accent, and then they can help the parents. Third, 70 percent of the refugees into Germany were military age males. If these people are sitting around with nothing to do for two or three years, and with Salafists reaching into these camps to recruit people for ISIL, that is a bad formula. And finally, refugees need a path to citizenship, and this is a place where Germany does a poor job. I told them they’re not going to get immigrants to fully commit to assimilation if they don’t see that pot of gold at the end of the rainbow."

Emerson acknowledged that Chancellor Angela Merkel’s open border policy has had it fair share of consequences, including the rise of populism.

"From her perspective, as someone who grew up in the former east, Merkel felt in many respects like she was a refugee. The welcoming spirit and economic support that the previous West Germany provided to folks coming in from the former east, she really felt this on a deep, visceral level. German people were incredibly embracing about the situation. The refugees kept coming until the point where there was a great deal of anxiety but it wasn’t [politically correct] to be blunt and express that."

The populist party Alternative für Deutschland (AfD), which started in opposition to the euro, quickly adopted a xenophobic, anti-immigrant platform in response to the influx of refugees in Germany. Emerson said he expects the party to reach the 5 percent threshold needed to gain seats in the Bundestag (federal parliament) in the upcoming September elections.

"I anticipate AfD getting into the Bundestag—they’ll definitely get over that 5 percent—but absent a scenario like the refugee surge in summer 2015 or a series of terrorist attacks directly linked to people who came into Germany, I don’t anticipate AfD will be a huge movement in this election," he said. "I think that 15 percent is probably the ceiling for where an anti-euro, anti-immigrant, pro-nationalistic party can get in Germany." 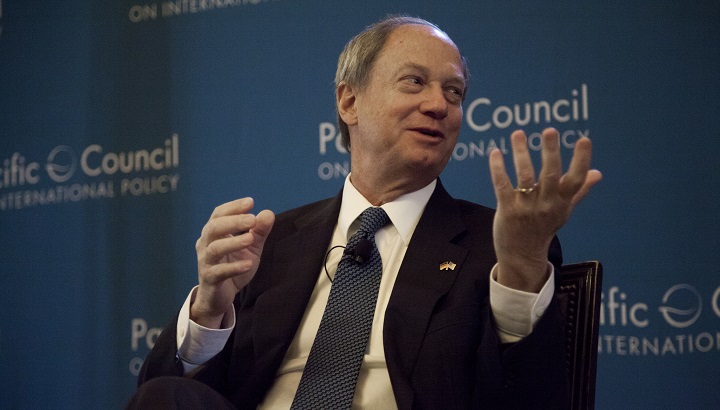 Emerson added, however, that AfD and its equivalent in France, Marine Le Pen’s National Front, are directly funded by Russia.

"It’s a strategic objective of Putin to drive wedges between and among EU member states, and certainly between Europe and the United States," he said.

Bell anticipates that Russia will continue its "aggressive and challenging" behavior.

"They have more patience than others," she said. "They’re carrying out hybrid-type warfare, including disinformation campaigns and a divide-and-conquer strategy. The United States and Europe need to stay strong on the sanctions because they are working. Americans need to realize how serious this is. We need a solution to this aggressive behavior. People should be thinking about red lines when it comes to Russia."

"It’s a strategic objective of Putin to drive wedges between and among EU member states, and certainly between Europe and the United States."

On the topic of Brexit, Emerson said people in Germany were shocked at the result of that referendum.

"Merkel’s most significant partner in the EU was David Cameron—and he’s gone," said Emerson. "Why these guys decide to hold referendums and put their political careers on the line is beyond me. Renzi in Italy did the same thing. Hollande was incredibly weakened in France. All of a sudden, from Merkel’s standpoint, here she is standing on her own."

Bell said she was worried Brexit would set off a chain reaction, but that has not come to pass.

"I was worried there’d be a contagion, but now I think the sobering reality of what it means for the UK to leave the EU is causing pause for other countries who might have been considering that," she said. "They’re not getting as much traction domestically. It’s going to take years for us to fully recognize and see the economic and security impacts of Brexit."

Emerson added he thinks a domino effect is still a possibility, and laid out what needs to happen next.

"The fundamental challenge for the negotiating of Brexit is, it is clearly in the interest of the EU and of Germany to negotiate a Brexit that allows the UK to be as closely tied to the EU as they can without creating an incentive for other countries to say, ‘I want that deal,’ and the whole thing unravels," Emerson said.