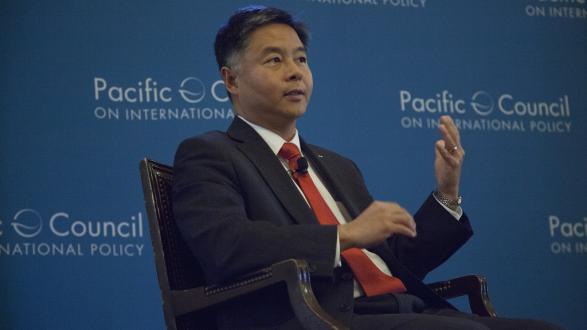 The White House needs to outline a clear strategy on Syria and North Korea, and obtain congressional approval if it wants to use military force, Representative Ted Lieu (D-CA) told Pacific Council members during Spring Conference 2017.

"I could support a change in U.S. strategy on North Korea if I knew what it was," said Lieu. "It is not a good idea to provoke North Korea. It’s clear that, unlike Syria, North Korea can do a lot of damage, not just to U.S. troops, but to millions of people living in South Korea. Seoul is about 35 miles away from the DMZ."

However, Lieu said, there is no imminent threat from North Korea that justifies a preemptive strike.

"If the president wants to do that, I believe he needs authorization from Congress," said Lieu. "For all we know, it will be years before they can launch an ICBM with a nuclear warhead attached that can hit the U.S. homeland."

The day after Spring Conference, North Korea tested a missile launch that failed immediately. Tensions have been mounting in the region, with President Trump sending a U.S. Navy carrier strike group to the Korean Peninsula and considering a kinetic military strike to cripple North Korea’s nuclear capabilities.

"You need to try diplomacy for at least 100 days before doing something like a preemptive strike," said Lieu.

"You need to try diplomacy for at least 100 days before doing something like a preemptive strike."

Yellin also asked Lieu if he thought last week’s U.S. bombing in Afghanistan was justified. The military dropped its largest non-nuclear bomb, known as the Mother of All Bombs (MOAB), on ISIL-K, a regional branch of the militant Islamist group in the Khorasan Province, killing 36 of its members.

"I believe when it comes to terrorists, we should hunt them down and kill them," said Lieu. "I have no reason to believe the MOAB bombing was unjustified. I’ve not read that civilians were killed because of it. I also am not sure that President Trump authorized it. My view is if we’re going to use force, we should win. Half measures don’t make sense.

"I don’t have objections to giving the military more authority to achieve objectives that the White House wants them to achieve," Lieu explained. "The problem is we don’t know what those objectives are. If you asked, ‘What is the U.S. objective in Syria? What is our strategy?’ We don’t know. If we use force there, it has to be tied to something. We need to make sure the use of force is attached legitimate objectives that help U.S. national security."

Lieu emphasized that under the U.S. Constitution, the president should not be able to engage in acts of war without congressional approval.

"With Syria, we saw a number of Freedom Caucus members come out against the strike because they knew it was against the Constitution," he said. "I don’t see a critical national security threat from Syria. Assad is an evil, bad, awful person, but it’s not clear he would ever attack the United States. I’m not sure we can solve this problem without a massive ground troop deployment for a very long time. I could support those things if I thought there was a threat to U.S. national security."

"My hope is that the American people will realize it’s not clear that we have national security interests in Syria, and we’ll draw down our involvement and entanglement in places like Syria."

Lieu added that he believes President Obama made a mistake in 2013 when he drew a red line on chemical weapons and then did not follow up when the red line was crossed.

"This time no red line was crossed, so I didn’t think Trump had to do anything in Syria," said Lieu. "My hope is that the American people will realize it’s not clear that we have national security interests in Syria, and we’ll draw down our involvement and entanglement in places like Syria."

He added that President Trump’s new interest in military adventurism is not what he campaigned on.

"When Trump campaigned, he said he was going to take the United States out of foreign conflicts," said Lieu. "What we see now is a much more forceful foreign policy than Obama. It makes you wonder if this person holds any principles. Some people see that as a good thing, that he’s very flexible. Not me."

On Russian influence in the U.S. presidential election:

Lieu discussed the investigation into Russia’s hacking of the U.S. presidential election, saying they "launched a cyber-attack and a very extensive influence campaign on our country. I read the classified intelligence report, I’ve read classified briefings on this, and I believe there is clear and convincing evidence in the classified materials to support the conclusions laid out in the unclassified report. Now they want to do the same thing in other countries such as France and Germany."

Lieu also called for a special prosecutor to be appointed to the investigation of collusion between Russia and the Trump campaign.

"We know now that there were a large number of previously undisclosed meetings between Trump campaign members and Russia, and we know the Trump campaign worked very hard to make sure the GOP platform took a pro-Russia position on Ukraine," he said. "The only question to me is, ‘Were these Trump campaign folks just naïve and unwitting participants in what was a Russian operation, or was this one of those wink-wink type of things, or was it full on collusion? I don’t know the answer, but do I think it’s very possible that it was collusion, based on the sheer number of coincidences."

Lieu said one of the reasons he ran for Congress is because he believes "climate change is the greatest long-term threat we face. If you look at what’s happened over the last few decades, the conversation has shifted. It used to be that people would mock you if you talked about climate change. Now they don’t do that anymore. Most folks in Congress won’t deny climate change is happening, they’ll say, ‘We don’t know how much humans are contributing to it.’ That’s already a win."

Lieu pointed out that the U.S. military is taking climate change seriously, even if many politicians are not.

Before Spring Conference, Representative Lieu contributed an op-ed on why the United States should address the connections between climate change and national security. Read it here.