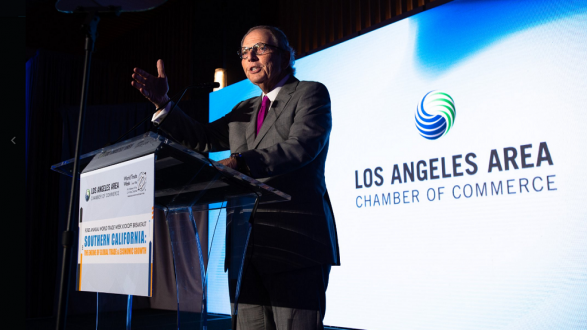 On Thursday, May 2, Pacific Council President and CEO Jerry Green accepted the Stanley T. Olafson Bronze Plaque Award at the 2019 World Trade Week Kick-off Breakfast in Downtown LA. Presented by the Los Angeles Area Chamber of Commerce since 1933, the award honors a member of the international trade community whose outstanding dedication, efforts, and achievements in the field have advanced global trade in the Southern California region.

Below is a transcript of Dr. Green’s acceptance speech.

My warmest thanks to the Chamber’s very energetic and visionary CEO Maria Salinas, Chairman of the Board Jerry Neuman, Carlos Valderrama, and all Chamber staff and members. I am deeply honored and surprised to receive this award. In fact, when I got the call I thought they were looking for Jerry Brown, not Jerry Green.

This award is not about me, it’s about all of you who make the city of Los Angeles the global hub that it is. I am merely a storyteller. And I tell your stories: the global LA story. This award celebrates that story, and this prize is shared by everyone in this room. We are all global Los Angeles.

The Pacific Council on International Policy has chosen to take up the global LA issue, and it has found great resonance. Under this banner, we share the work you all are doing with one another and make connections to advance your missions and business goals.

LA is a microcosm of the great experiment that is the United States of America. And more than ever, LA must be an exemplar to the rest of the country and to the world of America at its best.

What is “global Los Angeles”? Global LA is the universities, Hollywood, Silicon Beach, the world class museums, the ports, and LAX. It is our global cuisine, the artistic community, and globally-minded city and county leaders such as Deputy Mayor for International Affairs Ambassador Nina Hachigian and Los Angeles County Supervisor Kathryn Barger.

Global LA is our much-valued diplomatic corps, our vibrant and globally-aware business community, and most of all the people of LA, coming to this city from every corner of the world to make their dreams a reality. As Mayor Eric Garcetti often says, LA is the future, only sooner. Or as I say, LA is where the rubber hits the sky.

Southern Californians stand for and believe in something, whether that is immigration, free and open trade, an interconnected world, diversity, gender equity, inclusivity, or simply the freedom to dream and to achieve.

LA is a microcosm of the great experiment that is the United States of America. And more than ever, LA must be an exemplar to the rest of the country and to the world of America at its best.

I salute the LA Area Chamber of Commerce and global LA, which is everyone in this room as well as the people of Los Angeles.