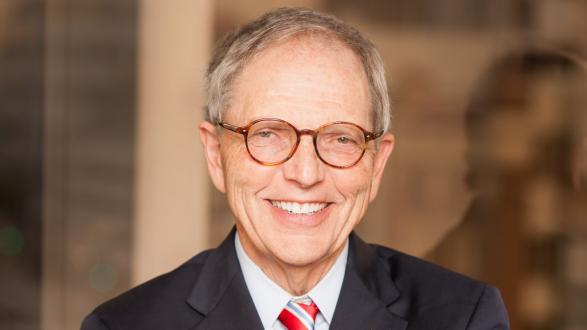 Pacific Council President and CEO Dr. Jerrold D. Green has been selected to receive the Stanley T. Olafson Bronze Plaque Award during the 2019 World Trade Week in Southern California. Presented by the Los Angeles Area Chamber of Commerce since 1933, the award honors a member of the international trade community whose outstanding dedication, efforts, and achievements in the field have advanced global trade in the Southern California region.

The award is one of the Chamber’s oldest and most prestigious honors. It emphasizes efforts to increase awareness of the positive impact that international commerce can have on our region’s economy.

“This year, a selection committee of Dr. Green’s peers and past recipients found his outstanding accomplishments in international trade to be exemplary for the award,” the Chamber wrote in an email.

"This award is a humbling reminder of the importance of the Pacific Council’s mission to highlight Los Angeles as a leader in global culture and commerce."

In addition to his leadership of the Pacific Council, Green serves as a research professor at the University of Southern California’s Annenberg School of Communication and Journalism. He previously served as a partner at Best Associates in Dallas, Texas, a privately held merchant banking firm with global operations. He also occupied a number of senior management positions at the RAND Corporation where he served as the Director of International Programs and Development and was awarded the RAND Medal for Excellence.

The Pacific Council on International Policy is proud to announce this honor for the organization’s president and CEO, who is a tireless champion of Los Angeles’ importance in world affairs. Through its Global LA initiative, the Pacific Council seeks to position Los Angeles as a leader on international issues and to engage the city in a conversation about seizing the opportunities and dealing with the challenges that arise from its global character.

“This award is a humbling reminder of the importance of the Pacific Council’s mission to highlight Los Angeles as a leader in global culture and commerce,” said Green. “The values that define the Pacific Council reflect our home in Southern California. Los Angeles is not abstractly committed to globalism; it is its very embodiment.”

Green will receive the award at the 93rd annual World Trade Week kickoff breakfast on May 2 in Los Angeles.