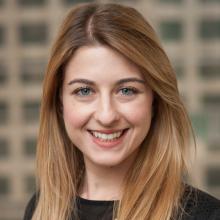 Madison was the Communications Associate at the Pacific Council on International Policy. She graduated with a Master's in Public Diplomacy at USC, and with a Bachelor's in Communication and a minor in Political Science from California Lutheran University. She spent a summer in Paris studying European economics and language.

As a CPD Student Fellow, Madison worked on producing editorial content for the CPD website, helping manage the Center's social media platforms, and assisting with research projects. She also worked as PD News Editor, helping to oversee the aggregation of public diplomacy headlines.

Madison is also a Non-Resident Fellow at the U.S. Advisory Commission on Public Diplomacy, which is tasked with appraising U.S. government activities intended to understand, inform, and influence foreign publics. She is the recipient of CPD's 2017 Best Student Paper Prize, and is the outgoing president of the Association of Public Diplomacy Scholars (APDS).

RESPONDING TO THE PANDEMIC: DOUBLE DOWN ON NONPROFIT SUPPORT
Globally Minded Gifts
Promoting Women’s Rights Around the World
Despite Trump's Claim, ISIL is Not Defeated
Recent Member Engagement at the Pacific Council
Gifts for the Globalists in Your Life
Is the Rise of Cities a Republican Concept?
The Cost of Instability in the Middle East
The Domestication of International Affairs
Will AI Prediction Technology Impact National Security?