Despite Trump's Claim, ISIL is Not Defeated 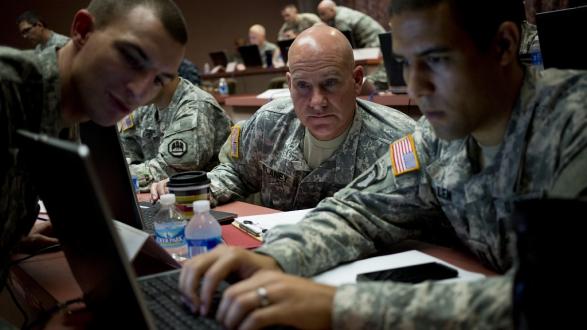 This morning, President Trump tweeted: "We have defeated ISIS in Syria, my only reason for being there during the Trump Presidency."

The President’s tweet comes as the administration ordered the withdrawal of troops from Syria, just one day after the Deputy Spokesperson for the U.S. Department of State Robert Palladino said, "We’ve made significant progress recently in the campaign…but the job is not yet done."

Despite Trump’s tweet about ISIL’s "defeat" and the recent move to withdraw troops, officials and lawmakers disagree.

"With all due respect, ISIS is not defeated," said Sen. Lindsey Graham.

There is plenty of research to paint a picture as to the group’s continued growth on the online battlefield.

"The decision to withdraw an American presence in Syria is a colossal, in my mind, mistake -- a grave error that's going to have significant repercussions in the years and months to come," said Sen. Marco Rubio.

The administration cites recent gains in Syria for the defeat of the "territorial caliphate," but thinking that a defeat on foot is the same as a defeat for the caliphate is a mistake.

For some time now, it has been clear that the ISIL battlefield is presently primarily a digital battlefield using information and communication technologies (ICT).

Recent analysis this month by RAND also points to the continued use of digital technology for ISIL’ recruitment and growth.

"Despite territorial losses and repression of civilian internet access, ISIS will likely continue to seek to leverage individuals' increased ICT usage in Africa and the Middle East to attract new followers," wrote Antonia Ward, an analyst for RAND.

It is a grave mistake to equate territorial gains over ISIL with its defeat.

Additionally, a 2018 Worldwide Threat Assessment report by Director of National Intelligence Daniel Coats stated that "Over the next year, we expect that ISIS is likely to focus on regrouping in Iraq and Syria, enhancing its global presence, championing its cause, planning international attacks, and encouraging its members and sympathizers to attack in their home countries."

They added that "Outside Iraq and Syria, ISIS’s goal of fostering interconnectivity and resiliency among its global branches and networks probably will result in local and, in some cases, regional attack plans."

In Ali Fisher’s "The New Netwar: Countering Extremism Online," General David H. Petraeus writes the foreword: "The threat posed by jihadist extremism online has, in fact, metastasized in recent years. During that time, it has evolved into a scourge that blights the internet and allows jihadists to reach into our societies and to tear at the very fabric of them."

Fisher outlines the sophisticated digital "swarmcast" approach ISIL employs to reach recruits online – a method that can easily grow the organization despite a physical presence. The idea behind the swarmcast is that ISIL can "operate through a dispersed network which constantly reconfigures, much like the way a swarm of bees or flock of birds constantly reorganizes in mid-flight" in order to disseminate information. This ensures that if one site or Twitter account is deleted, the information is still distributed through a variety of other platforms by a variety of users.

Public diplomacy tools must be employed to disseminate alternative messaging, to work with partners and local organizations fighting radicalization online, in addition to social media companies to monitor content.

The Counter Extremism Project also notes the prevalence of digital ISIL propaganda: "Even if extremist groups lose control over territory in their respective regions of operation, their ability to reach out and spread propaganda online will allow them to continue to attract support from across the globe."

Research, officials, and lawmakers agree that ISIL is not defeated. But we can also look to anecdotal examples for the group’s presence too.

A man inspired by the recent Pittsburgh synagogue attack planned a mass murder in Toledo before being arrested. He had pledged loyalty to ISIL after an online radicalization process and conversion.

A California man recently pleaded guilty to providing support to a terrorist organization after communicating with ISIL supporters.

A South Florida man was arrested last week for posting bomb-making guides and engaged in online conversations about ISIL and jihad.

If the administration is going to reduce our military presence in Syria, it MUST increase its diplomatic presence online.

Of course, these are anecdotes and do not prove a statistical resurgence of ISIL online. However, there is plenty of research to paint a picture as to the group’s continued growth on the online battlefield.

If the administration is going to reduce our military presence in Syria, it MUST increase its diplomatic presence online. Public diplomacy tools must be employed to disseminate alternative messaging, to work with partners and local organizations fighting radicalization online, and to collaborate with social media companies to monitor content.

Physical defeat is one thing – and it’s great – but let’s not to neglect the digital battlefield where war is likely to continue for years to come.

Madison Jones McAleese is the Pacific Council’s Communications Associate and a recent graduate of the Master’s in Public Diplomacy program at USC Annenberg.