Promoting Women’s Rights Around the World 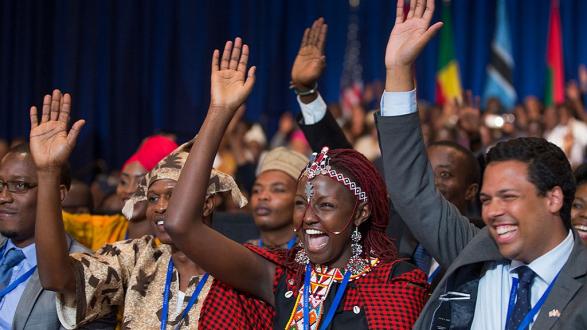 “We know that if women had equal access, the world would be dramatically different,” Michelle Nunn, president and CEO of CARE USA, told Pacific Council members on March 8, International Women's Day.

CARE is a global humanitarian organization dedicated to ending poverty. It was founded in 1945 to send the very first care packages to survivors of World War II. Since 1945, the organization has expanded to focus on development and aid in 94 countries around the world, with a special emphasis on women’s economic empowerment, girls’ education, reproductive health, gender-based violence, and more.

According to CARE, women and girls make up most of the 1.4 billion living in extreme poverty. Additionally, over 1 billion women around the world live in countries with no legal protection for workplace harassment and many countries still allow child marriages, said Nunn.

“That’s our opportunity for a call to action,” said Nunn.

CARE places a special focus on women and girls because they are impacted the most by poverty. But, according to CARE, “when you empower a girl or a woman, she becomes a catalyst for positive change whose success benefits everyone around her.”

"We know that if women had equal access, the world would be dramatically different."

Nunn discussed the current political climate and the desire to place less emphasis on global aid and development. But while it’s common to hear these stories in the media, Nunn says there is actually broad bipartisan support for humanitarian aid, as both parties recognize that international aid is critical to economic stability and international security.

She also noted the broad support for aid by military generals, who’ve testified in front of Congress to promote the importance of military strength coupled with diplomacy and development. Nunn pointed to General James Mattis as an example, who said with reduced diplomatic funding, he’d need to “buy more ammunition.”

"This year, there has been a greater focus on International Women’s Day than ever before. But more can always be done."

To this end, CARE is working on over 900 projects around the world. Nunn spoke about the successful Village Savings and Loan Associations (VSLA) which started in Niger, where 20 to 30 women meet weekly to set money aside to save and loan to one another for microenterprises. The program provided women with an opportunity for economic independence. But Nunn said economic empowerment typically leads to political and social empowerment as well. Half of the women elected to political positions in Niger came from the VSLA program.

Nunn says this year, there has been a greater focus on International Women’s Day than ever before. But more can always be done.

“We can save lives,” said Nunn. “All lives have equal value.”

Madison Jones McAleese is the Pacific Council’s Communications Associate and a recent graduate of the Master’s in Public Diplomacy program at USC Annenberg.