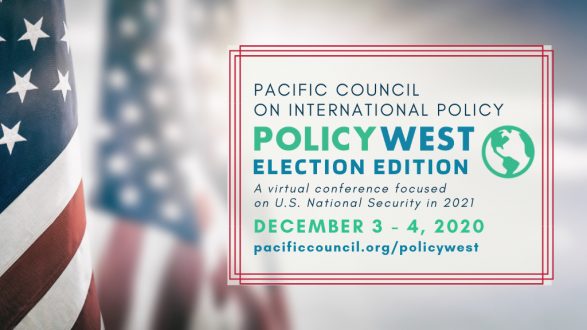 PolicyWest 2020 was a two-day virtual conference open to all Pacific Council members. The theme of the conference was U.S. global leadership and national security in 2021, in light of the recent presidential election.

The 2030 Agenda for Sustainable Development, adopted by all United Nations Member States in 2015, provides a shared blueprint for peace and prosperity for people and the planet. Its foundation is built on 17 Sustainable Development Goals (SDGs), which are an urgent call to action by all countries - developed and developing - in a global partnership.

SDG 16: "Peace, Justice, and Strong Institutions" articulates the key role that good governance and the rule of law play in promoting peaceful, just, and inclusive societies. As a continuing component of the Goalmakers project, the Pacific Council will convene a panel to discuss how the pandemic has compounded the challenges to achieving SDG 16. Going into 2021, access to justice for marginalized populations, combating corruption, and government accountability are just a few of the mainstays critical to achieving peace and upholding the rule of law around the world, as COVID-19 and its effects continue to ravish communities. This conversation will explore how to overcome these obstacles and implement solutions at home and abroad.

Read up on these resources before this panel discussion:

Read up on these resources before this debate:

Featuring U.S. Senator Christopher Coons of Delaware, and moderated by Dr. Cynthia Telles, director of the UCLA Hispanic Neuropsychiatric Center of Excellence at the Semel Institute for Neuroscience and Human Behavior.

The United States sits at a crossroads and must act to navigate its domestic and international challenges successfully. Few leaders understand these stakes better than Senator Coons, whose role on the Senate Foreign Relations Committee, Appropriations Committee, and Small Business & Entrepreneurship Committee lies at a critical intersection of these local-to-global issues.

The next President of the United States will be sworn in with an unprecedented set of security challenges before him. From navigating the United States' role in international institutions to shifting relations with allies, President-elect Biden's national security priorities will set the tone for 2021 and beyond. Please join us as we host General Lori Robinson to discuss what she believes the next administration's top national security priorities should be.

Read up this resource before this discussion:

Featuring John Podesta, founder and director of the Center for American Progress, and moderated by Ambassador Nina Hachigian, deputy mayor for international affairs for the city of Los Angeles.