Yemen’s War is a Humanitarian Disaster that Must Be Resolved 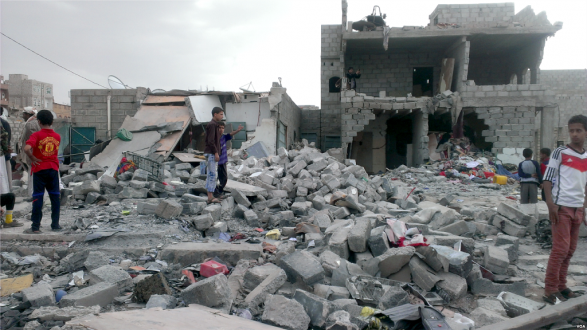 Bodine is the director and distinguished professor in the practice of diplomacy at Georgetown University’s Institute for the Study of Diplomacy. Farwell is an associate fellow in the department of war studies at King's College London and a senior fellow at the Middle East Institute. The discussion was moderated by Ms. Suzie Abdou, a consultant at Ma’at Consulting.

Yemen’s undeclared civil war could have far-reaching, unpredictable, and international consequences. The conflict, spreading outwards from the key southern battleground around Aden, pits Saudi Arabia, the leading Sunni power—plus what remains of Yemen’s government—against northern-based Houthi rebels, who are covertly backed by Shia Iran. What has until now been an unacknowledged proxy war between Iran and Saudi Arabia has burst into an open confrontation that appears to be escalating rapidly.

"The Saudi intervention in the conflict qualitatively changed the extent and consequences of the war," said Bodine. "The infrastructure has been destroyed and half the population is displaced."

"The Yemen conflict is a debacle and a stalemate that is not going to get better for Yemen, Saudi Arabia, or the United States."

Both Bodine and Farwell said that Saudi Arabia is potentially guilty of war crimes in Yemen and that the U.S. government is complicit because of its support of Saudi Arabia’s campaign.

"The United States provides the weapons, precision missiles—which are only precision if they’re fired correctly—and fuel for Saudi jets," said Bodine. "We are complicit, and we will pay with our credibility in the region."

Farwell said the United States cannot and should not "be in the position of supporting actions that most people around the world would consider war crimes. This is a debacle and a stalemate that is not going to get better for Yemen, Saudi Arabia, or the United States. The Saudis cannot win this war."

Bodine agreed that the war in Yemen is a stalemate politically and militarily and called for an end to the Saudi air bombing campaign in Yemen, including U.S. support for that campaign, which she said has created a humanitarian disaster.

"It is estimated that one person in Yemen dies of cholera every single hour," she said. "It is a humanitarian disaster." Farwell agreed, adding that out of 27.6 million Yemenis, over 17 million do not know where their next meal will come from.

The question, Farwell said, is whether or not the United States has the moral courage to stand up and stop the Yemen conflict. Bodine said that is doubtful, given that "the Trump administration’s embrace of the Saudis has emboldened them and their policies in places like Yemen."

"There is a very strong sense of national Yemeni identity. That is much of what will bring about a political solution to the war."

So how does this conflict get resolved? Bodine said it will have to be a UN-brokered agreement and a massive reconstruction effort that will cost billions of dollars. She also said that Yemenis themselves will have to play a large role in the resolution of this conflict.

"There is a very strong sense of national Yemeni identity," said Bodine. "That is much of what will bring about a political solution to the war."

Farwell added that one hopeful aspect of the situation is that "there is more of an attitude towards reconciliation in Yemen than in most places in the Middle East."

Bodine said that so far, the Yemen war has been largely unknown and unreported and is only now starting to get attention in the United States. Farwell added that it is a common misperception that the conflict is actually a proxy war between Iran and Saudi Arabia.

"Framing it that way is warped," he said. "The Houthis in Yemen would be highly insulted by the notion that they are proxies for Iran. We have to get over this paranoia about Iran. Being hostile to Iran is not always the best strategy, especially in Yemen."

Bodine agreed, saying the Yemen war "is not a Shia-Sunni conflict. It is a civil war exacerbated by the overlay of a proxy war, driven by grievances."

Ultimately, if the conflict continues to worsen in Yemen, Farwell said, the party that stands to benefit is al Qaeda.

The Pacific Council’s Summer Teleconference Series continues with discussions about South Asia’s water crisis on August 10; the U.S.-Russia relationship on August 24; and Germany’s upcoming election on September 21. Read summaries of the previous discussions in the series here.