For South Africa’s Economic Future, All Eyes on 2017 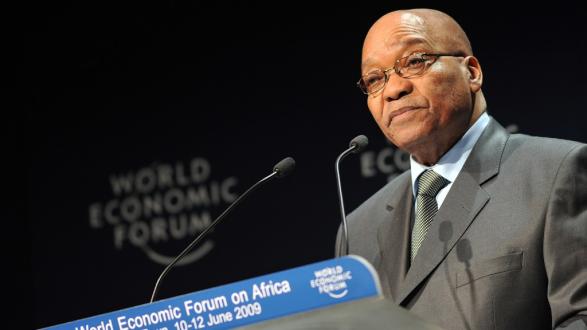 The next year will be critical for South Africa’s political and economic future, Mr. Grant T. Harris told Pacific Council members during the fifth and final installment of the BRICS Summer Teleconference Series. The discussion was moderated by Dr. Gerald J. Bender, Professor Emeritus of International Relations at the University of Southern California.

Harris is the Chief Executive Officer of Harris Africa Partners LLC, which advises companies and organizations on strategy, policy, and mitigating risk with respect to doing business in Africa. He previously served as Special Assistant to the President and Senior Director for African Affairs at the White House from 2011 to 2015.

South Africa’s economy is experiencing its slowest growth rate since the 2008 financial crisis. "Too slow," according to the International Monetary Fund, to "improve living standards in a country where a third of the population is excluded from the economy." South Africa's unemployment rate has increased to 26.7 percent in 2016, the highest in eight years.

"South Africa is not doing well economically," said Harris. "It hasn’t fully recovered from the aftershock of the financial crisis of 2008. Predictions say economic growth will be at a rate lower than population growth in 2017 and 2018. That means on a per capita basis South Africa is expected to get poorer over the next couple of years."

Harris pointed out that people had high expectations in 1994 when Nelson Mandela was elected president that South Africa would dominate the rest of the continent politically, economically, diplomatically, and militarily. But since then other countries such as Kenya and Nigeria have assumed leadership roles in some of these areas.

"South Africa is expected to get poorer over the next couple of years."

"There is a traditional notion that South Africa is the first stop for investors that are wary of and unfamiliar with African markets, but in reality, it’s a much more complex picture," explained Harris. "There are major corporations like GE and others that are placing their regional hubs in Kenya and in other countries. There’s a lot of investor interest in East Africa."

The political situation in South Africa is also in disarray following the ruling party’s worst performance in local elections in August since they came to power in 1994.

"The ANC received 54 percent, compared to 60 and 70 percent they’d been getting," said Harris. "The lesson they draw from this is really going to impact the economic approach of the country."

Harris said that President Zuma is called a lame duck by many even though he has three years left in his term because of the various scandals he is embroiled in. The country’s highest court ruled earlier this year that Zuma violated the constitution by defying an order to repay $542,000 in public funds he used to renovate his personal house with non-security related upgrades, such as a swimming pool and amphitheater. He paid back the funds this month.

"That’s not his only scandal," said Harris. "In April, he barely survived an impeachment vote, and a high court before that ruled that 783 accounts of corruption, fraud, money laundering, and tax evasion leveled against him should not have been dropped in 2009 right before he became president. He has said the ANC is going to rule ‘until Jesus comes back,’ but recent polls say 57 percent of South Africans think the ANC has lost its moral compass."

Harris also talked about how and why South Africa came to be included in the BRICS.

"The ‘BRICS’ used to be the ‘BRICs’ with a lower case ‘s,’" he explained. "South Africa was added in 2011. In many people’s minds, that was an addition to overcome what might otherwise be an embarrassing implication that Africa is somehow economically irrelevant. At the time, South Africa’s economy was only a quarter of the size of the smallest BRIC country, India, and its population was only a third of the least populated country, Russia."

Harris pointed out that Jim O’Neill, who originally coined the term "BRICs" in 2001 as an economist at Goldman Sachs, said in 2010, "For South Africa to be treated as part of BRIC doesn’t make any sense to me. But South Africa as a representative of the African continent is a different story."

Read summaries of the other four teleconferences in the Pacific Council’s BRICS Summer Teleconference Series: on Brazil, Russia, India, and China.