SeouLA: U.S.-Korea Must Work Together on Tech
Global Los Angeles 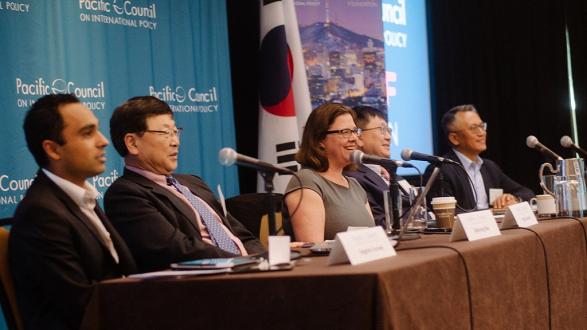 Bilateral cooperation on technology can boost the economies of the United States and Korea, experts told guests of the Pacific Council and the Korea Foundation during the first panel at the SeouLA Forum in downtown Los Angeles.

SeouLA convened business, civic, government, and academic leaders from the United States and South Korea to exchange ideas and discuss key bridges in the U.S.-Korean relationship, including trade policy, innovation, and economic and cultural ties.

Kim set the scene, noting the challenges Korea faces and how new technology can help.

"The driving force of the Fourth Industrial Revolution is digital technology," said Kim. "Korea is a manufacturing country, in hard competition with China and Japan, but traditional manufacturing industries are not profitable... It is now Korea’s turn to transition to clean energy and other industries."

"The gap between the haves and have-nots is getting wider," he said. "We need to have a discussion about sustainable societies... We have to reform education. Next year, we will start teaching software coding as a regular course in K-12 education. Technologies such as AI create jobs."

Eum agreed that Korea must innovate to reach the "next level" economically.

"If you think back to the 1980s, there was concern about the state of the U.S. economy," he said. "The manufacturing base was under attack, especially from emerging economies out of Asia. The largest companies today started back then, and most of them are tech companies. You can see how tech has played a key role in revitalizing the U.S. economy. The conversation we’re having in Korea today is similar to the United States 30 years ago. Korea has emerged from one of the poorest countries in the world to one of the most successful economies."

If Korea hopes to follow the path of the United States in terms of tech, he said, Seoul will benefit from pursuing greater bilateral collaboration, including sending more Korean students to study at U.S. universities and to work at cutting-edge U.S. tech companies.

"If we are creating barriers or turning away the best talent that wants to come to the United States, then we are potentially jeopardizing our economic future."

"What Korea could do a little better is find a way to facilitate not only acceptance to U.S. universities, but also opportunities to have Koreans work at U.S. startups," he said. "It’s one thing to get knowledge from an academic level, but they should also be getting experience at a practical level."

He added that tech communities are concerned about recent U.S. immigration and protectionist trade policies that might hinder collaboration and growth.

"The growth engine we’ve put together in the tech sector, which has powered the U.S. economy over the last 30 years, was due in large part to the many talented engineers who were the best and brightest from all over the world," he said. "If we are creating barriers or turning away the best talent that wants to come to the United States, then we are potentially jeopardizing our economic future."

Cha agreed that educational cooperation between the United States and South Korea will drive innovation and growth.

"A lot of academics are trained in the United States, so we need to keep this relationship and also strengthen [it]," he said. "The governments of both sides, Korea and the United States, need to sponsor bigger collaboration projects."

Cha said that one of the challenges Korea faces is that it is a smaller country than China and the United States, who are the big players.

"Korea is very dynamic," he said. "We have a lot of agility, we have a lot of educated people, a lot of people abroad, but one of the disadvantages of Korea is the scale. We cannot repeat what China and the United States do. We have to find our own space, especially now that China has come back from a long sleep in history. Korea is strong in manufacturing, but we have to go beyond that because with digital innovation, the guys at the top will control everything."

During her remarks, Gordon told the group about the Paulson Institute’s Risky Business Project, which examines the economic risks and opportunities associated with climate change and the transition to a clean energy future.

"Every major country in the world has agreed that we need to reduce our carbon emissions dramatically in order to reach levels that are safe," said Gordon. "This is often posed as a tradeoff between that goal and an economic one, in large part because we were powered by the industrial revolution. However, we’re starting to see through tech advances that there doesn’t have to be a tradeoff, that we can see climate change action as a driver of economic growth."

"Korea is an extremely fossil fuel-dependent country with a very low amount of renewables."

"Countries must use electricity that is mostly renewable, but not too much," she said. "This is not the current energy approach that Korea is taking. Korea is an extremely fossil fuel-dependent country with a very low amount of renewables—only 1 percent of the mix right now, although the government just announced a $36 billion investment in renewable energy, which is a great start."

Gordon said that even with the loss of fossil fuel jobs, renewable energy is a job creator.

"You cannot realize this kind of change without a strong policy framework," she said. "This is where the United States is about to fall behind. We’re reversing course. Other countries have an opportunity to pull ahead here. This is a moment of revitalization in how we power this transformation and meet the global demand for clean energy. It’s a moving market, and this is an area for Korea to look in providing new things in the world and showing leadership."

Read more about SeouLA, including a summary of Tony Seba’s keynote address.