Seba at SeouLA: Major Industries Will Be Disrupted by 2030
Global Los Angeles 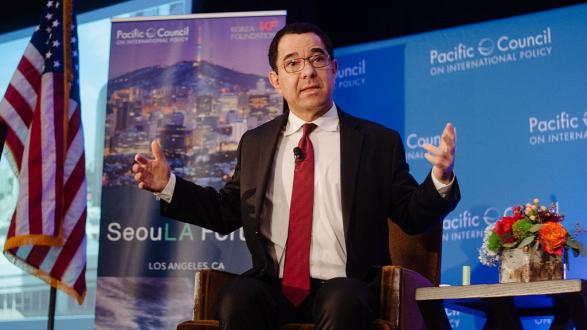 Major industries such as energy and transportation will undergo a complete "disruption" by the year 2030, Mr. Tony Seba told guests of the Pacific Council and the Korea Foundation during his keynote address at the SeouLA Forum on March 31 in downtown Los Angeles.

SeouLA convened dynamic business, civic, government, and academic leaders from the United States and South Korea to exchange ideas and discuss key bridges in the U.S.-Korean relationship, including trade policy, innovation, and economic and cultural ties.

Seba, an instructor of entrepreneurship, disruption, and clean energy at Stanford University, is the author of Clean Disruption of Energy and Transportation: How Silicon Valley Will Make Oil, Nuclear, Natural Gas, Coal, Electric Utilities and Conventional Cars Obsolete by 2030.

"If you look at any industry: healthcare, construction, energy, transportation; everything will be disrupted in the next 10 to 15 years," said Seba. "It only took 13 years, from 1900 to 1913, for New York City to complete the transformation from horses as the main mode of transportation to automobiles. If anyone in 1900 had said, ‘We’re on the cusp of a disruption of transportation,’ people would have said, ‘You’re insane.’ When disruptions happen, they can happen very, very quickly."

"If you look at any industry: healthcare, construction, energy, transportation; everything will be disrupted in the next 10 to 15 years."

Seba defined a disruption as a convergence of technologies that make it possible for entrepreneurs and companies to utilize products and services that do two things: create new markets and radically transform, weaken, or destroy existing industries.

"Energy storage costs are going down so quickly that by 2020, the average American  household will be able to have 24 hours of energy storage at home for about a dollar a day," said Seba.

The electric vehicle is disruptive in many ways as well, Seba explained. EVs convert 90 to 95 percent of the energy in the battery into usable power, whereas gas-powered cars convert only about 17 to 21 percent. Electricity is cheaper to move than diesel and gas. On a per mile basis, it is 10 times cheaper to charge an EV. Gas-powered cars have more than 2,000 moving parts; EVs have about 20, meaning they require almost no maintenance.

"By 2020, an EV with a 200-mile range and the performance of a Porsche is going to cost $30,000, which is less than the median cost for a new car," said Seba. "By 2025, all new vehicles will be electric. The technology also already exists where EVs can power a house for two days, so they’re disruptive in more ways than one."

He added that if every car in Korea were electric, they could store 75 percent of the daily electricity demand in Korea.

"Deep learning technology is quickly advancing," said Seba. "If a self-driving Tesla in Seoul learns how to avoid an obstacle, it uploads that data and every Tesla car will then know how to drive that way. The rate of improvement in self-driving is accelerating to the point where some people are talking about zero fatalities within a few years, by 2020. Every year humans kill 1.3 million people with their cars. We’re not great drivers."

Seba described a looming transformation of the transportation industry over the next decade.

"The future of transportation will be electric, self-driving, and sharing," said Seba. "Parking will be nearly obsolete. This will be a huge disruption. It’s gathering momentum and the tipping point is going to be 2020. It will be complete by 2030."

"It is going to be in everyone’s selfish economic interest to put solar on their rooftops and share electric, self-driving cars."

On the energy side, Seba said solar is another technology that will disrupt traditional industries.

"Every single form of traditional energy has gone up in cost: coal, oil, etc.," said Seba. "Solar keeps going down. By the end of this year, solar will achieve what’s called ‘grid parity’ in about 80 percent of global markets, which means that the cost of unsubsidized solar on residential and commercial rooftops will be at or below what we pay for electricity prices. Technologies have cost curves. They get cheaper and better as time goes on, and we can actually anticipate that. It is going to be in everyone’s selfish economic interest to put solar on their rooftops and share electric, self-driving cars."

He added that other key technologies to watch in 2017 include sensors and the internet of things, artificial intelligence and machine learning, robotics, 3D printing, and more.

"These technologies are going to disrupt and obliterate the entire energy and transportation infrastructure as we know it today," said Seba. "This is not an energy transition. This is a technology disruption. And this is going to happen despite governments, not because of governments."

"Korea has the skills, the technologies, and the infrastructure to be a winner and wealth generator in this disruption."

He pointed out that South Korea is uniquely positioned to take advantage of this disruption in the years ahead.

"Korea has many of the key technologies and companies that can be disruptive," he said. "The GM Bolt electric vehicle was designed in Korea. It uses LG batteries and electronics. It’s a Korean car. The largest solar company is Korean. Korea has the skills, the technologies, and the infrastructure to be a winner and wealth generator in this disruption."

Governments in general, he added, can either help accelerate this disruption in their own countries, which will enable trillions of dollars of wealth creation, or they can help delay it—but they can’t stop it entirely.

"The governments that push back on this disruption are deciding to make their citizens poorer, and they’re going to use all kinds of excuses and ‘FUD news’—fear, uncertainty, and doubt—to do that," said Seba. "But those are the choices for governments. You can help lead or you can help follow."

Stay tuned to the Newsroom for an interview with Tony Seba and summaries of our SeouLA panel discussions on economic revitalization through new technology and the status of U.S.-Korea trade.