Mayor Garcetti: This is L.A.’s Time to Lead as a Global City
Global Los Angeles 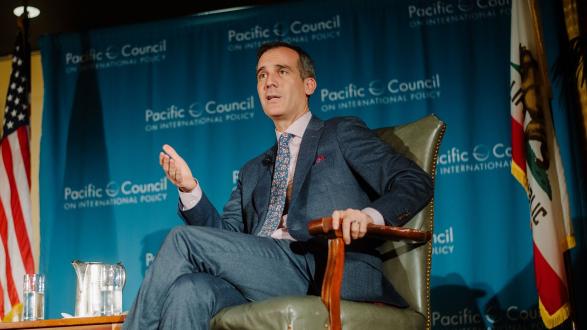 Los Angeles needs to assert itself as a role model for the world in this Pacific Century, L.A. Mayor Eric Garcetti told Pacific Council members in his inaugural State of the Global City address.

Following his remarks, Dr. Cynthia A. Telles, clinical professor at the UCLA Department of Psychiatry and director of UCLA-SSPC, moderated a discussion with Garcetti. This event was presented in partnership with the L.A. Mayor’s Office and was made possible by the generous support of the RM Liu Foundation.

"Los Angeles, it is time for us to lead," said Garcetti. "This is an extraordinary moment for L.A. This is the Pacific Century. This is our century. Let us lead it."

Garcetti called for a Pacific perspective in the highest levels of the U.S. government, including in the country’s defense and diplomatic work.

"L.A. is not just a local or regional or national leader, but a global leader," he said. "This diverse and innovative place full of people who are constantly reimagining the future has a lot to offer in these very anxious times. Every time the pendulum swings and there is a change of government in Washington, people are wary of the future, but this moment is different. For many people it feels like the very earth is shifting underneath us. The divides feel very deep right now."

However, he added, Los Angeles is in many ways poised to play an important role in changing that for the better.

"This city is a haven of tolerance and understanding, a place where we celebrate our differences," he said. "Los Angeles today is the most diverse city, not just on the face of the earth, but in human history. Let that sink in for a moment. If you want to see the face of the world, walk the streets of Los Angeles. This isn’t just a great global city, but one of the most critical and crucial global cities in the world. Los Angeles is arguably the northern capital of Latin America, the western capital of the United States, and the eastern capital of the Pacific Rim."

Part of that effort to strengthen Los Angeles as a global city, Garcetti said, includes the city’s bid to host the 2024 Olympic Games. Currently one of three cities including Paris and Budapest that are vying for the Games, Los Angeles envisions an innovative, fiscally-responsible, and sustainable concept for the 2024 Olympics. The election of the host city will take place in September in Lima, Peru.

"In 2017, the big global issue for us is landing the Olympics," said Garcetti. "Now is the time to utilize any connections we have to those 98 voters to convince them to bring the Games to L.A. It’s like a high school election for class president; it’s that small."

"We need a reminder of what it means to engage with the world," he said. "The Olympics has always come at great moments in great decades, and in times of immense global need as well. In 1932, when Los Angeles first hosted the Olympics, it was a time when nobody else wanted to host them. In the midst of the Great Depression, we kept the idealism of the Olympics alive. In 1984, in the midst of the Cold War, we not only saved the Olympic movement but we showed we could turn a profit with a new model."

"About 77 percent of Angelenos support hosting the Olympics," Garcetti said. "You can’t get a 77 percent vote for anything. Now is the time to win that bid, and in the process we can show them what sustainability in economic and environmental terms is really about. L.A. has always been a Games-changer when we’ve host the Olympics. What we did in 1932 and 1984, I know we can do again in 2024."

"In 2017, the big global issue for us is landing the Olympics. Now is the time to utilize any connections we have to those 98 voters to convince them to bring the Games to L.A."

Garcetti said that President Donald Trump has been helpful in trying to bring the Olympics to the United States.

"The president has been wonderful on the Olympics," he said. "I called him and he brought it up first thing saying he wanted to help. For the first time in years, we had the president of the United States on the phone with the president of the International Olympics Committee. He called me back to tell me about it afterward and said, ‘Give me more people to call.’ I thank him for that. It is my responsibility as the mayor of Los Angeles to engage and I actually look forward to finding common ground with this administration, such as in infrastructure, energy, and regulation."

Garcetti said he also hopes Los Angeles can work with the Trump administration on immigration.

"As a Mexican-Jewish-Italian American, I was as offended by what was said [by then-candidate Trump] as anybody," said Garcetti. "I’m never going to not say that, but it’s also important for me to say to him, ‘I don’t know if people are talking to you about this, but I want you to hear the economic impact. This town is booming. Please don’t set us backwards. Your average Trump voter doesn’t want to see people working for less than minimum wage under the table. We all have a stake in making sure our DREAMERs can continue to go to college, get good jobs, and succeed.’ So when I look for areas of common ground, I’m not naïve, but I don’t write anybody off."

"I actually look forward to finding common ground with the Trump administration, such as in infrastructure, energy, regulation, and hopefully immigration."

Garcetti pointed out that contrary to popular opinion, Los Angeles is not officially a sanctuary city. He also identified several myths surrounding sanctuary cities and discussed the city’s potential strategy should the Trump administration withhold federal funding over the issue of immigration.

"It’s patently false that we don’t cooperate with federal law enforcement officials," he said. "We hand over dangerous rapists, murderers, and others to federal officials, we just have a procedure for that and it demands a warrant from a court, not, ‘Oh, that person looks the wrong way.’ I believe the 10th Amendment protects us from mandates that we have to change how we do that procedure in exchange for funding. The Supreme Court has spoken very loudly in that the federal government cannot force cities or states to do something in exchange for funding, unless it’s for that specific program. We receive $500 million in federal funds, but none of that is for cooperation between LAPD and federal immigration officials. We need to humanize the stories of immigrants."

Garcetti also discussed his aspiration to make Los Angeles the "activism capital of the world," adding that if people support women's rights they should donate to and volunteer at organizations that actually help women.

"The Women’s March was an important moment," he said. "It was important for us to hear each other’s voices. But it’s what we do that’s important. If you believe in women’s rights, the next day you should be out there volunteering and donating to the downtown women’s shelter, where a survivor of domestic violence is living on the streets tonight and needs help to heal. If you believe in human rights for women, you should get involved with the Coalition to Abolish Slavery and Trafficking, which helps people who have been trafficked globally and here in the city. If you believe in women’s rights, be a woman who runs for office. Don’t just talk about it. Get off Facebook and get out into the streets."

"Yelling is a pretty powerless thing to do. But actually marching and organizing and doing, that’s the most powerful thing that we have and that’s what we’re called to do in this moment in history."

He added that engaging with the Trump administration and the change it is enacting is not just about one person.

"The Civil Rights Movement wasn’t [about calling people] racist,'" Garcetti said. "It was about, ‘Everybody should be at the lunch counter. Nobody should be denied an education. There shouldn’t be two fountains.’ Keep your eye on standing up for what we want to see, not who’s pissing us off. That goes both directions. We saw it with how Republicans treated President Obama and we see it with how Democrats are treating President Trump. I’m not saying all things are equal, but the mistake is to personalize this and make it about one person. That’s a pretty powerless position to act from. Yelling is a pretty powerless thing to do. But actually marching and organizing and doing, that’s the most powerful thing that we have and that’s what we’re called to do in this moment in history."

Garcetti said he hopes to deliver many more State of the Global City addresses to the Pacific Council in the years to come, "if my job interview with the people of L.A. goes well in a month and a half," he said. "I will look forward to returning and seeing the evolution of this great global city."

Ahead of this event, Mayor Garcetti wrote an article for the Pacific Council about strengthening L.A. leadership in the Pacific Century. Read it here.