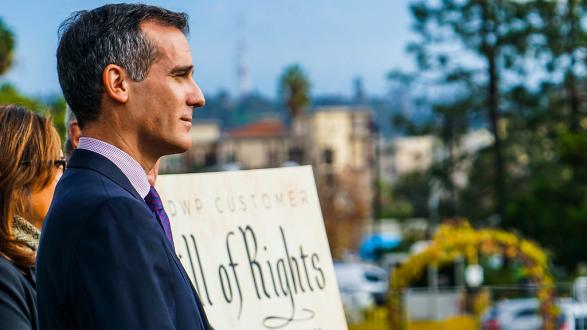 Our world is reshaping itself for a Pacific Century.

For reasons both cultural and commercial, America has pivoted to Asia: Los Angeles-to-China has displaced New York-to-London as the dominant air corridor, Asians have become the fastest-growing ethnic group in our country, and 43 percent of the goods that come into America — regardless of their final destination — move through our San Pedro Bay ports. The Pacific Rim is drawing new, more focused attention from world and local leaders — and the relationships between Pacific nations are now dominating the conversation on issues of trade, foreign investment, globalization, immigration, and climate change.

At the dawn of this Pacific Century, Los Angeles is redefining its place in the world. L.A. has always been a city on the global stage, because we stand at a unique geographical crossroads: the western capital of the United States, the northern capital of Latin America, and the eastern capital of the Pacific Rim. Our city is among the most diverse in human history — Angelenos come from more than 100 countries, speak at least 220 languages, and represent countless traditions. We have long been a worldwide center for manufacturing, trade, entertainment, and other creative industries. L.A. reflects what the world looks like today, and how America will look tomorrow.

At the dawn of this Pacific Century, Los Angeles is redefining its place in the world.

However, despite these unique assets, our city has always had an ambivalence about embracing its position as a true political leader — about serving as a place that brings together world leaders, competes for global forums, and exports new ideas and policy.

Today, we are changing that. We are working to make Los Angeles not just an economic capital, or an entertainment capital, but a political capital: a city of four million people — in a metropolitan area of 18 million — innovating, investing, and attracting attention in ways that affect people all over the globe.

We are leading in the global economy, where Los Angeles has long been America’s gateway to the Pacific Rim and shown that international trade is good for our country. Our port is number one in America, and we’re spending $2.6 billion over ten years to keep it that way — because it is a job creator. The twin ports of the San Pedro Bay are responsible for 1 out of 9 jobs in the L.A. region, and 1 out of every 51 in America. Our airport continues to break passenger records every year, and in 2016 we welcomed 80 million people — more than 22 million of them from abroad. More people start or end their journeys at LAX than at any other airport in the world, and we want to make a good, lasting impression: that’s why we’re putting over $14 billion to work to re-imagine every terminal, deliver world-class amenities, and finally connect rail to the airport.

When L.A. brings cities together to act against climate change, the collective impact is historic and world-changing.

We are taking a leadership role in the fight against climate change, because no challenge we face is more fundamentally global in scale. The future of our planet is at stake, and I laid out a Sustainable City Plan to make sure that L.A. does its part and makes our progress measurable — setting concrete goals to get off coal, cut our water imports in half, reduce per capita water use by 20 percent, and cut our carbon emissions by 80 percent.

And we’re not keeping those strategies and achievements to ourselves: at my invitation, some 600 leaders from both sides of the Pacific convened in L.A. for the first U.S.-China Climate Leaders Summit, which was born out of President Obama and President Xi’s historic agreement to curb carbon emissions. At the Summit, Chinese cities signed a landmark agreement to cap emissions up to 10 years early, which matters because cities now house more than half the world’s population and generate 70 percent of all greenhouse gas emissions. When L.A. brings cities together to act against climate change, the collective impact is historic and world-changing.

As home to the largest infrastructure and transportation program in all of North America, L.A. is showing cities across America and the world how to invest in themselves.

As home to the largest infrastructure and transportation program in all of North America, L.A. is showing cities across America and the world how to invest in themselves. When our voters approved Measure M last November, they greenlit a $120 billion investment in expanding our light rail network, fixing roads and bridges, filling potholes and laying down bike lanes — creating 465,000 local jobs over 40 years to build the city of the future.

And then there are the investments with more global implications, as companies across the world sense that something special is happening here, and fight to invest in the Los Angeles market. Pacific Rim companies — from BYD to Kinkisharyo — are setting up factories and North American headquarters in L.A. Korean Air is erecting the tallest building west of the Mississippi in our downtown, Chinese capital is helping to fuel a building boom in L.A.’s city center and eastern suburbs, and from Beijing to Qatar, investors want a piece of our movie studios, tech companies, and manufacturers. Even the French-born creative director for Yves Saint Laurent moved his fashion studio to L.A. for inspiration.

We want to bring the Olympics back to America to show that our nation remains a welcoming presence on the world stage.

All of this international engagement is what makes our push to land the 2024 Olympic Games so meaningful. We are, of course, proud to be the U.S. bid city: we want to bring the Olympics back to America to show that our nation remains a welcoming presence on the world stage. And L.A. is the ideal home for the Games, because every athlete would be on the home team in a city as diverse as ours. That’s why we’re asking the world to meet us in L.A. seven years from now. And when they arrive, they will be met by the new city we are building, a place that’s embracing its role as not just a national political leader, but an international one as well.

We are doing all of this out of a fundamental belief that the world needs American leadership rooted in the best of our values: pluralism, equality, and the understanding that government can and must act as a positive force in people’s lives. We aren’t interested in closing ourselves off from the world or dissolving our obligations and responsibilities; L.A. is a just city that welcomes and protects the people who come here from all over the world.

Our history books are filled with the stories of cities that defined certain moments in time. In our moment, the world stands at the dawn of a Pacific Century — and L.A. should lead it. More than anywhere else, we embody the open, inviting, entrepreneurial spirit that allowed America to become the most powerful and influential nation on Earth.

And as we look toward the challenges and opportunities before us in the years to come, our city is ready to cement its place as not just an economic and cultural capital, but a political one as well. In this new century, L.A. can be where the world looks for inspiration, new ideas, and strong leadership that redefines how people everywhere can work, grow, and prosper together.
____________________

Eric Garcetti is the 42nd Mayor of Los Angeles. He was elected four times by his peers to serve as President of the Los Angeles City Council from 2006 to 2012. From 2001 until taking office as Mayor, he served as the Councilmember representing the 13th District, which includes Hollywood, Echo Park, Silver Lake, and Atwater Village. Read more.