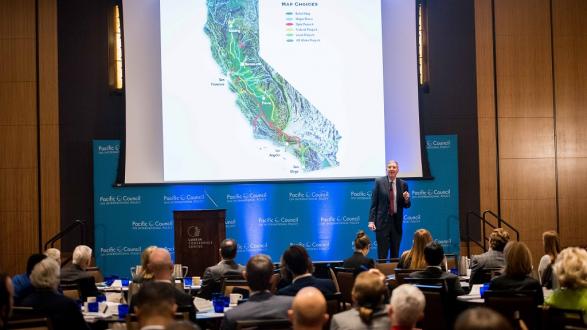 The following are just a few of the insights from our inaugural Water Conference.

The failure to sufficiently invest in water security now could mean that the United States and other international actors will incur great costs in the future to respond to potential humanitarian crises, public health emergencies, and conflicts between or within states. Water scarcity also has the potential to inflame regional conflict; particularly during the last two decades, water has incited instability in the Middle East through adverse climate conditions, water mismanagement, and the use of water supply as a weapon itself. Panelists discuss how water problems (shortages, poor water quality) are already impacting U.S. national security interests overseas.

"Where the stressors are most significant right now in terms of hotspots in the world and U.S. national security interests, the Middle East might go without saying," said Diamond. "But water service delivery issues there in particular are inflaming some of the issues going on in the Middle East."

"Poor management and governance are some of the drivers of this water stress, but it is demand that is the greatest driver of water related stress."

Otto pointed out that water issues are increasingly noticed by national defense and security agencies around the world.

"They see a strong connection between water and security issues," she said. "In terms of which regions are the most challenging right now, I would say sub-Saharan Africa and South Asia. If you look at the water picture in India, it’s quite frightening in terms of the rapid drawdown of groundwater resources, how over-taxed their surface water resources are, and the fact that they sit with a number of countries on some very important transboundary rivers with not ideal sharing arrangements. Poor management and governance are some of the drivers of this water stress, but it is demand that is the greatest driver of water related stress. The good news is that we have an opportunity to actually change the way we’re managing our water demand, and that is the crux of the challenge." 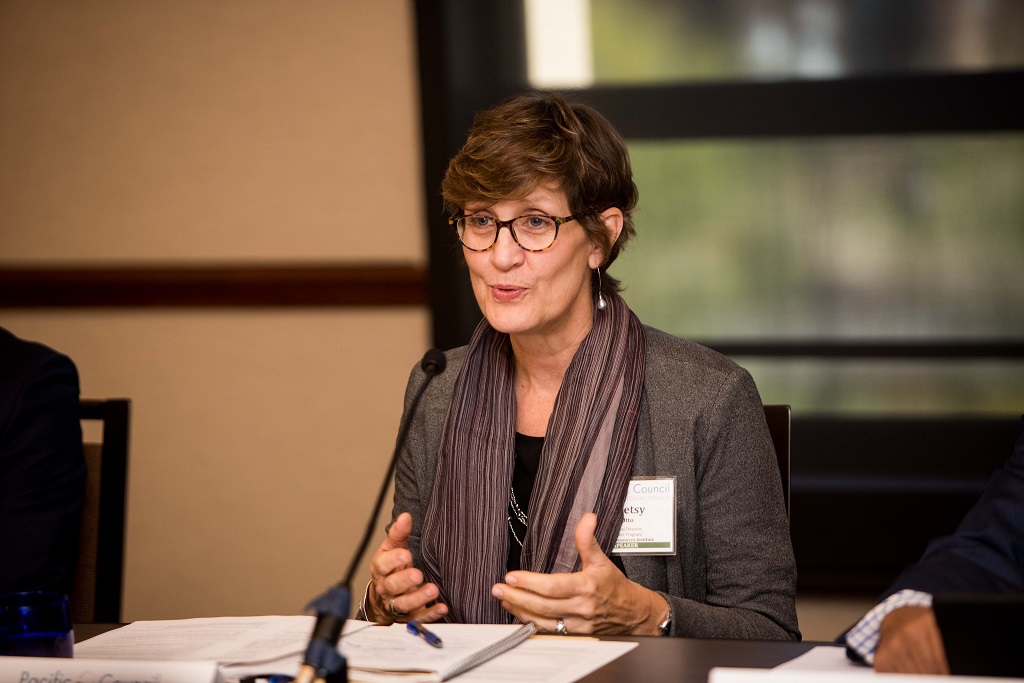 King said water stress has led to the ascendancy of violent extremist organizations around the world who use water as a weapon in regional conflicts.

"In the war in Yemen, all sides have been targeting water infrastructure," he said. "The Saudis destroyed a reservoir in 2016 that supplied 30,000 people in Sana’a. There are estimates that Sana’a could be the world’s first capital city to totally run out of water, and this could happen as early as 2030. We’ve seen water weaponization in Iraq, especially with subnational actors. One example is when ISIL seized the Mosul Dam, which is upstream on the Tigris River from Baghdad. Breaching that dam could have caused a wave of water that would have inundated the Green Zone. We are also seeing actors withhold water services to subjugate populations."

Ahead of the Water Conference, King wrote an article for the Pacific Council’s Newsroom on water stress, instability, and violent extremism. Click here to read the article. Diamond wrote about water solutions to the displacement crisis in the Middle East, found here.

Urban Water Resilience Across the Globe

It is anticipated that in the next 30 years, urban water demand will increase by 50 percent. Challenges such as population growth, economic expansion, and climate change further threaten water supplies in cities around the world, which are re-thinking investments in infrastructure and water management practices.

"It is so important that we have elected officials who can bridge that gap and both understand water issues and speak to the public about this very important resource."

"When Mayor Garcetti came into office, he made it a priority to put forth a plan for the entire city," said Crosson. "That included getting buy-in from every department across the city, and now we’re seeing passion and innovation" in terms of water conservation and environmental sustainability practices across the board.

Friedman explained how important it is to educate the public about water issues in a way that relates to citizens' every day lives. When she was on the Glendale City Council, the head of that city’s water utility used graphs and charts to explain to residents why the city needed to raise water rates.

"The public had absolutely no idea what he had just said and why they had to spend more money on water, especially after people had been trying really hard to conserve water themselves," said Friedman. "It is so important that we have elected officials who can bridge that gap and both understand water issues and speak to the public about this very important resource. It is difficult to explain to people that their conservation efforts will be rewarded with higher water rates." 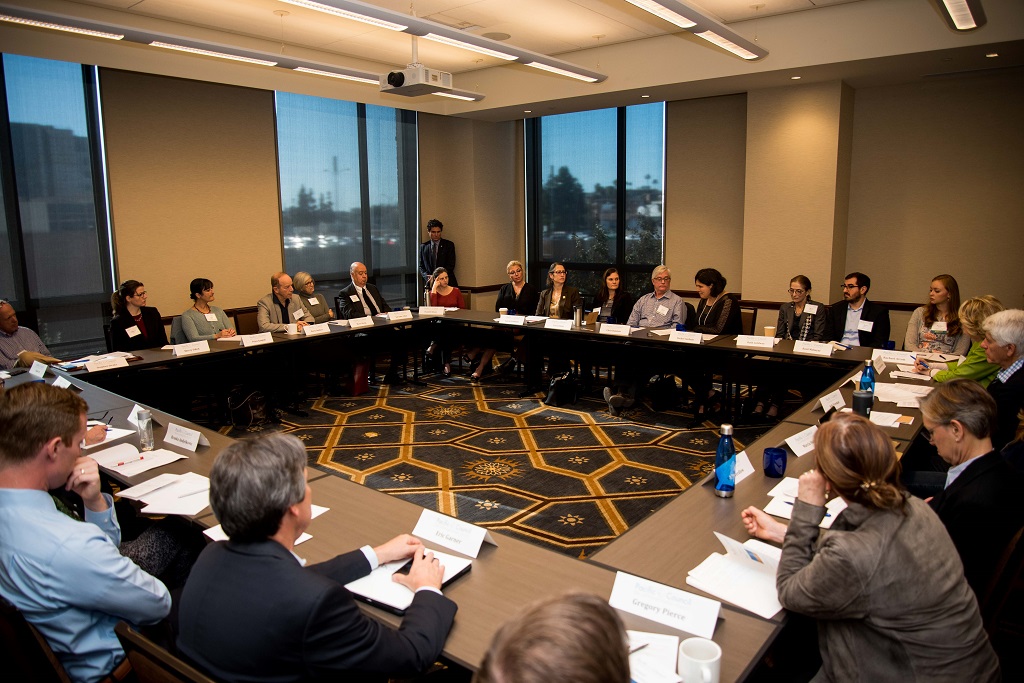 Dunston argued that when it comes to managing urban water systems in an effective and equitable way, smart policies, regulations, and the ability to enforce those regulations are critical.

"We take for granted the hard work that mayors’ offices and counties do in order to regulate things," he said. "Without that it’s chaos. It’s very difficult. And who ends up paying for it is usually the poorest of the poor."

A recent report from the Pacific Institute, looking at California’s water footprint, shows that California’s agricultural footprint is dominated by non-renewable groundwater. Dependence was apparent throughout the recent drought. Now with the drought behind us, panelists discussed how leading agricultural sectors are addressing their water risk and what is needed to become more water secure.

"What California has experienced in the last five years—the most precipitation in recorded history this past year after the worst drought in recorded history—is really a preview of the future," said Boren. "It’s the new normal. We’re going to have increasingly volatile weather. That means we’re going to have to manage water differently than we used to, including relying more heavily on groundwater storage." 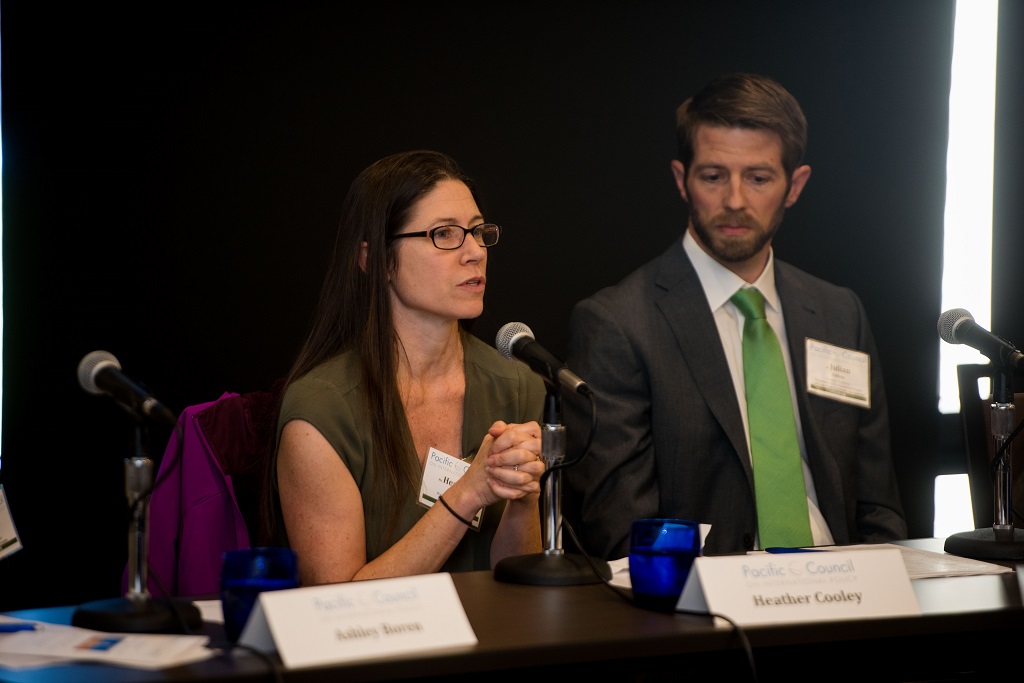 Fulton pointed out that California’s water use is growing faster than its population, which highlights the region’s own water scarcity challenges.

"Virtual water is the amount of water embedded in the products we demand and consume in California, such as food, electronics, clothing, and more," he explained. "California currently requires 100 cubic kilometers or more of water to sustain our economy. Our water footprint—the amount of virtual water that we require to sustain ourselves—has grown by about 2-3 percent per year, a growth rate that is greater than population growth. We’re also using more of our internal water resources to create and export products. When we talk about global water problems, they’re not just problems elsewhere; they are also our water problems."

Green said that while California is the gold standard in terms of water management strategies, the demand for services and production associated with water has been increasing.

"Everybody wants California to succeed because we are the place where these changes are going to occur in technology, institutions, and funding," he said. "In California, we do import more water, in the way of products and services, and spend more money than we are selling off-site. What we do well here is produce food, and that has a global impact and response because there’s a global need. But we have to do it as efficiently as possible."

Cooley discussed the new technologies that are being developed and deployed in California related to water management.

"These technologies are very important: the drip irrigation system, the technologies that are helping us understand how much water crops actually need and when they need it, and new ways of using recycled municipal wastewater for agriculture," she said. "There are parts of California, particularly the Central Valley and the Central Coast, where we could be using that wastewater more effectively. I also think we have been living beyond our means. There is going to have to be some reduction in acreage. We need to be smart about that and help those communities that are going to be adversely impacted."

Over the next quarter century, clean drinkable water will become more scarce as the global human population grows and supply decreases. Although investing in water is already commonplace, water is not openly traded in the marketplace like other commodities such as oil.

"Today there are existing water markets in California and the western United States, but they are non-transparent and highly fragmented."

Casado-Perez argued that physical water will never be traded in the same way as physical oil.

"Water markets will have a more important role than they have today in allocating water, but they will never reach the level of oil markets," she said. "There are limits on trading water as a commodity because beyond being important for any economic activity, it’s also very important for human life."

Payne pointed out that water is more expensive to transport than oil, and that even new technologies like desalination are not yet having a significant effect on water markets because they are also expensive.

"There hasn’t been a lot of desalination in the United States yet; it’s a relatively new phenomenon," he said. "What I’ve observed is that desalination contracts typically trade at a price premium to other sources because it’s so expensive to desalinate that water considering the energy, facilities, and chemicals required. Whoever is producing that desalinated water needs to recoup their costs and in some cases make a profit depending on whether they’re public or private. So those desal agreements are priced higher." 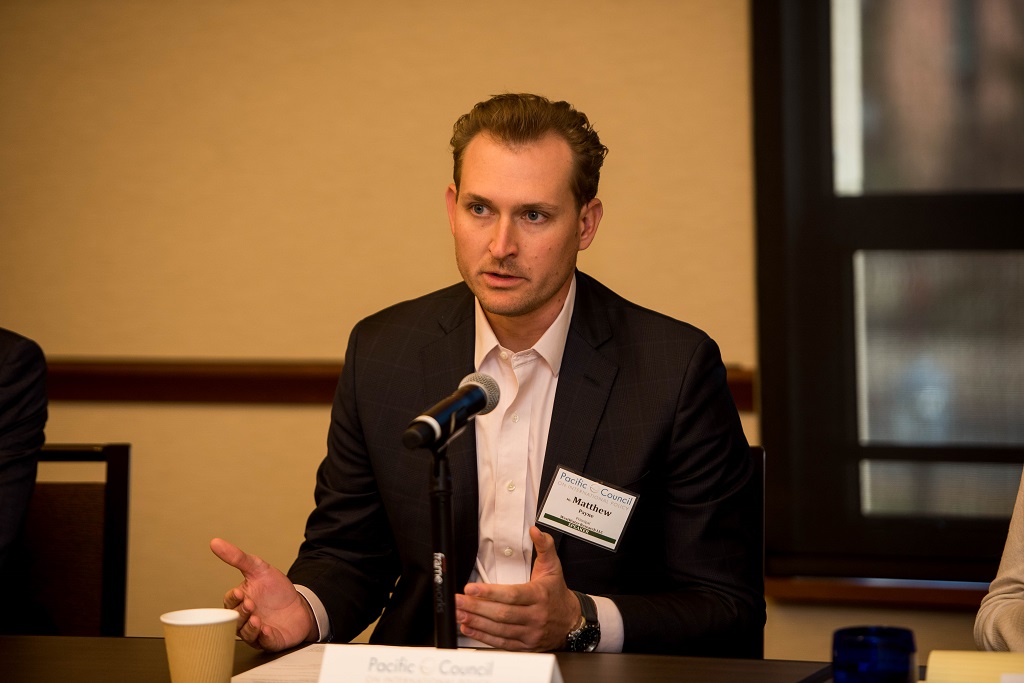 "Today there are existing water markets in California and the western United States," he said. "People are actively buying, selling, and trading water. But they are non-transparent and highly fragmented. As we raise the level of transparency, one of the ways we can help disadvantaged communities deal with this issue is allowing them to participate in the market. Formal water markets help raise the level of transparency about what’s actually going on, and then people can make informed decisions about their water."

Check out more photos of this conference on our Flickr page.

Learn more about the Pacific Council’s Global Water Scarcity Project, which seeks to connect the dots between California’s water scarcity challenges and international issues of trade, energy, politics, and security.