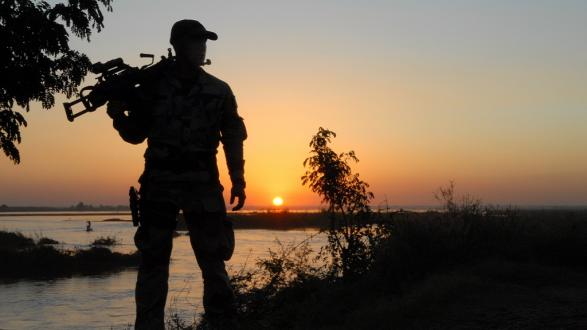 This article is an advance reading for our inaugural Water Conference on December 1, 2017, a special program exploring global water scarcity challenges and solutions, presented in partnership with O'Melveny & Myers LLP. Learn more about the conference here.

Pathways of influence linking water stress and conflict in a number of fragile states in the Middle East and Africa, namely Syria, Iraq, Somalia, and Nigeria, are becoming more visible and carry worldwide implications for states with similar characteristics. First, climate change leads to water stress that challenges agricultural and governance systems. Second, water stress is a key factor both as a cause and accelerant of conflict. Third, subnational extremist organizations are exploiting water stress for profit and a palpable battlefield advantage.

The relationship between water and conflict depends largely on the nature of a country’s societal and political fabric. While these countries share common socio-political traits, the role of water stress in each conflict varies.

Just before Syria plunged into conflict in 2011, the preceding period from 2007-2010 saw its worst drought on instrumental record, according to a report from the National Academy of Science. The drought’s impact on the physical environment caused detrimental second- and third-order effects on ecological and human systems, leading to declining food security and increased forced migration. Poor water governance aggravated the situation. Short-term and historic water policy failures deepened resentment of Bashar al-Assad’s rule.

Demographics are another factor—increasing population growth and changing distributions also greatly strain fragile ecosystems. Global population is expected to increase from 7.3 billion in 2015 to 9.7 billion by 2050. In contrast, world water supply is shrinking on balance; meanwhile, precipitation is increasingly unpredictable in many regions. By one estimate, global water consumption for irrigation, domestic, industrial and livestock use will rise 21 percent by 2050.

Migration was particularly disruptive in Syria where farmers and herders, dislocated by the drought, were forced into cities but relegated to peripheral shanty towns, intensifying their existing grievances. Conditions in these shantytowns likely contributed to the rise of militant extremism in Syria. This prevailing context of depravation has allowed ISIL to recruit 60 to 70 percent of its fighters locally from Syria.

Somalia experienced a calamitous drought also in 2011—millions fled the lack of food and water, as well as insurgent violence from militant Islamic group al Shabaab. The UN High Commission on Refugees reported that the number of Somali refugees grew sharply, creating an alarming influx across borders. The Somali refugee crisis remains a significant humanitarian challenge with international implications that can further erode stability in neighboring countries such as Yemen. Indeed, of the over 879,000 displaced Somalis, the majority are in the neighboring countries; including Kenya, Yemen, and Ethiopia.

Cooperation with respect to scarce water has generally prevailed over conflict; however, new academic literature and intelligence forecasts raise doubts that this trend will endure as social tensions rise.

Cooperation with respect to scarce water has generally prevailed over conflict; however, new academic literature and intelligence forecasts raise doubts that this trend will endure as social tensions rise. In a major strategy document, the U.S. Department of Defense observed that future water supply challenges could "aggravate stressors abroad such as poverty, environmental degradation, political instability, and social tensions—conditions that can enable terrorist activity." A recent academic study by the National Academy of Sciences finds that in conflicts that surround climate-related disasters including drought, social tensions play a greater role than poverty, income inequality, or even past propensity for conflict.

In Nigeria, conflict over water resources and grazing territory in the increasingly arid Middle Belt climatic transition zone divides belligerents along ethnic and religious differences, according to a report in the Journal of Human Ecology. Although this violence has not received widespread media attention, in 2016, these herdsman killed more Nigerians than the infamous Boko Haram. The 2015 Global Terrorism Index reported that attacks by these "Fulani Militants" earned the group status as the world’s fourth deadliest terrorist group. Farmers retaliate violently, sometimes killing livestock and poisoning water or grass. This violence, combined with sparse economic opportunity, has created a conflict spiral with no end in sight, sending warnings to other states with similarly divided societies.

The common element of these cases is violent extremists undermining national authority and the potential for ungoverned spaces. During the Somali drought also in 2011, the militant group al Shabaab blocked development assistance and attempted to govern vast swaths of captured territory, but was unable to provide basic services including a reliable supply of water. Ultimately the group lost credibility, loyalty, and territory.

Recent evidence suggests that the manipulation of water is taking a more sinister and deliberate turn in the Middle East and Africa. A 2012 U.S. Intelligence Assessment predicted that "as water becomes scarcer in the coming decades, states may begin employing water as a ‘weapon,’ even in areas where cooperative solutions had prevailed." Water weaponization deployed by subnational groups can be parsed into four categories:

The conflict in Syria paints the most vivid picture of subnational actors’ use of the water weapon. ISIL has weaponized water in a plurality of ways, and was found responsible for 21 of the 44 incidents recorded from 2012-2015. Interestingly however, al Shabaab mishandled a significant drought prohibiting the provision of humanitarian aid and demonstrating inability to provide water. In this case the water weapon backfired. The resulting suffering curried disfavor among the civilian population.

Use of the water weapon by ISIL and al Shabaab could inspire other extremist organizations as they metastasize and expand.

Use of the water weapon by ISIL and al Shabaab could inspire other extremist organizations as they metastasize and expand. Combined with the growing effects of climate change, the array of ways that water supply is being manipulated by extremists could create lasting damage to vulnerable populations and host governments.

Water stress has accelerated instability leading to conflict at the detriment of governance—the cornerstone of effective water stress management.

A states’ inability to provide water services erodes authority and legitimacy, creating space for the ascendance of violent extremists.

Displaced people represent multiple geopolitical risks. Migration is perhaps the most concerning trend, especially for recipient nations. Many U.S. allies and strategic partners are affected, stoking fears of internationalization of conflict and major humanitarian challenges, according to a report by the International Organization of Migration.

Energy markets are disrupted by extremist violence in the Middle East and Africa as oil supply disruptions in Nigeria and Iraq create market uncertainty. Somalia sits on the Bab-el-Mandeb Straits, a vulnerable chokepoint located between the horn of Africa and the Middle East that supports transportation of approximately 4.7 million barrels per day of crude oil as of 2014, and where piracy has been rampant. Conflicts in the countries described herein are likely to cascade into impacts of global concern. In all cases, water stress has provided opportunities for extremist groups to operate and substantially expand their influence.

Remedial approaches by the global community should incorporate diplomatic and development strategies as well as direct defense assistance. For national governments, effective governance and management of water resources will block subnational actors’ progress. Successful cooperation between the global community and national governments will provide an important precedent for addressing complex environmental problems in the raft of strategic yet fragile states where similar ecological and social conditions to those we studied exist.