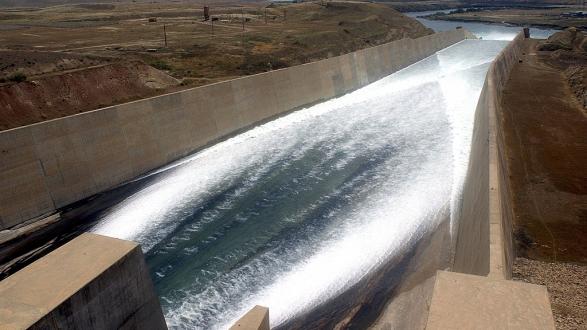 This article is an advance reading for our inaugural Water Conference on December 1, 2017, a special program exploring global water scarcity challenges and solutions, presented in partnership with O'Melveny & Myers LLP. Learn more about the conference here.
____________________

Water management challenges around the world often stem from an imbalance between supply and demand, the impact of climate change, deteriorating infrastructure, and a lack of financial resources. Sound governance structures and public service regulations can help mitigate these stressors on municipal water systems and services, but in conflict affected countries these challenges become more acute as systems and regulations crumble. This is particularly true in the Middle East, which suffers from high levels of water insecurity and where decisions related to water distribution can be highly politically charged.

As one of the most tangible aspects of effective governance in fragile states, the provision of water and other basic services is often a barometer of the political stability of governments at all levels. Tension is heightened at the local level, where elected officials are more likely to have direct control over water provision and waste collection—services that are among the most imperative to households and livelihoods.

In the Middle East, the inability to meet these service delivery needs has the potential to further destabilize local communities in countries with significant population displacement, such as Syria and Iraq, as well as those in neighboring countries such as Jordan, where a huge influx of refugees in resource-strapped communities along its northern border has considerably heightened political tension.

In Syria and Iraq, war has hollowed out once thriving cities and strained localities that lack the infrastructure to accommodate the heightened demand for services and resources. According to the United Nations Office for the Coordination of Humanitarian Affairs, there are approximately 3.2 million and 6.3 million internally displaced people in Iraq and Syria, respectively. Services across the board have been impacted by war, with approximately two-thirds of the population in Syria and 8.3 million people in Iraq lacking consistent access to safe water.

With more than 650,000 Syrians registered with UNHCR in Jordan, the Syrian refugee crisis poses significant challenges there as well for resource management, service delivery, and governance systems. As one of the world’s most water scarce countries, Jordan already faced significant challenges producing and delivering drinking water to established towns and cities around the country prior to the onset of the refugee crisis. Today, those challenges are compounded as the vast majority of Syrians reside in non-camp settings, particularly in the northern governorates.

In Syria, USAID has supported local communities and councils in the north and south in repairing and restoring essential services, including water, electricity, and solid waste management.

Since the Zaatari refugee camp opened in 2012, tens of thousands of Syrians have lived in or passed through the camp, and within the last five years daily water supply and service delivery methods have fluctuated and grown in sophistication as households transitioned from tents to prefabricated housing. As of August 2017, more than half of the refugees in the camp were below the age of 17, meaning that demand for water and other services will continue to rise as children become adults and new babies are born.

International efforts to meet these needs have led to increasing resentment among low-income Jordanians in the city of Zaatari, who see tremendous amounts of donations flow into the refugee camp but not into their community. The continued growth of the camp’s population will lead to greater involvement by municipal authorities and water utilities in the camp’s management as its urban development challenges become more complex.

What is Being Done

In Syria, the U.S. Agency for International Development (USAID) has supported local communities and councils in the north and south in repairing and restoring essential services, including water, electricity, and solid waste management. Rehabilitation priorities are identified in collaboration with local communities and councils through needs assessments and town hall meetings.

To restore drinking and irrigation water supplies, USAID provided engineering support for the rehabilitation of wells and water conveyance systems, and restoration of power supplies to operate pump stations. USAID has also provided training and grants to local councils, civil society groups, and service providers to improve governance systems and build capacity in project management, financial management of service delivery, and community engagement. This empowers communities to make their own decisions and helps establish the credibility of local leaders.

Jordan’s water sector has relied extensively on international donors and organizations for technical assistance and financial support over the last few decades.

The working groups also responded to numerous complaints throughout the community about the quality and quantity of water. When a site visit and tests revealed a defect in the chlorine levels and illegal water use by factories and companies in the province of Wasit, the working group and the water department manager at the site were able to immediately halt the illegal tapping. Eventually the local government provided water tankers to supply the proper quality and quantity of water.

Jordan’s water sector has relied extensively on international donors and organizations for technical assistance and financial support over the last few decades. Through the course of the Syrian refugee crisis, the UN Development Program and implementing partners have provided oversight and management of water services within the refugee camps.

Outside the camps, USAID and other donors have funded several large-scale infrastructure rehabilitation and utility strengthening projects. Currently, USAID is providing dedicated assistance to the Ministry of Water and Irrigation and the Water Authority of Jordan to improve water sector governance. USAID is also supporting water utilities, particularly the Yarmouk Water Company, to improve technical and financial performance. This utility, which serves the communities in northern Jordan where a vast majority of Syrian refugees reside, is receiving technical assistance to support improvements in financial management, business planning, and organizational restructuring. The goal is to create more efficient and cost-effective water services in light of increased demand for services.

Given the impact these achievements would have on wider regional stability, building local capacity to effectively allocate and manage water resources should be a primary goal of the international community.

Solving the problems of providing water, sanitation, and solid waste management have implications for the overall well-being of refugees in camps and IDPs as well as the local established communities. Access to water is tied to the health and safety of refugees as well as neighboring community members, particularly women and children, and can affect education outcomes, income generation, and mortality rates. In the Middle East, these humanitarian and livelihood issues are also inextricably linked to ethnic and sectarian politics.

Addressing these existential development challenges is essential to halting and reversing the destabilization of communities that are trying to regain control of their own security and reconcile politically. Given the impact these achievements would have on wider regional stability, building local capacity to effectively allocate and manage water resources should be a primary goal of the international community as well.
____________________

Todd Diamond is a Pacific Council member and Director for the Middle East and North Africa at Chemonics International, an international development firm that implements USAID projects around the world.

Basil Mahayni is a Manager for the Water, Energy, and Sustainable Cities practice at Chemonics International.