The Fate of Populism at PolicyWest 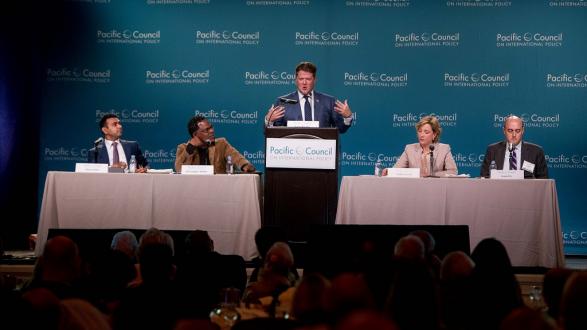 Watch the debate and read a summary below:

Populism, derived from the Latin word populus, meaning "the people," is often an ambiguous concept.

Perceived as both good and bad, populism encompasses a range of approaches and appears on the left and right sides of the political spectrum. Cas Mudde, a Dutch political scientist and professor of international affairs at the University of Georgia, defines populism as a "thin" ideology that addresses only part of a political agenda.

"Consequently," Mudde said, “almost all relevant political actors will combine populism with a so-called host ideology, normally some form of nationalism on the right and some form of socialism on the left.”

It is within this ambiguous context that four experts at the Pacific Council on International Policy’s annual members’ conference, PolicyWest, debated the question, "Will populism continue to rise?" The panel was moderated by Pacific Council member and Reading Clerk for the Florida House of Representatives, Mr. Aaron Brooks.

Although they disagreed about the factors and timeline of populism’s rise and fall, both sides of this debate agreed that responsible populism does not exist.

On the side arguing populism will continue to rise sat Dr. Christopher Parker, professor of political science at the University of Washington, and Mr. Ehsan Zaffar, senior advisor on civil rights and civil liberties at the U.S. Department of Homeland Security. On the opposing side sat Mr. Jamie Fly, senior fellow and director at the Future of Geopolitics and Asia programs at The German Marshall Fund of the United States, and Ms. Colleen Graffy, associate professor of law at Pepperdine University.

Prior to the debate, 71 percent of Pacific Council members voted ‘yes’ to a poll asking if populism will continue to rise. To win, a side would need to gain additional percentage points once the vote was taken again at the end of the debate.

These four ingredients, or universal populist trends, include a narrative of grievances, a political system unable to resolve or deal with those grievances, a fragmented media landscape, and rising xenophobia and scapegoating of marginalized communities.

Panelists focused their divergent arguments on key themes, most prominently questions of whether populism emerges from common trends or is unique for each nation and what factors facilitate populism’s rise and fall.

Zaffar presented an appropriate analogy for a lunchtime debate, describing a populist cake comprised of four ingredients. These four ingredients, or universal populist trends, include a narrative of grievances, a political system unable to resolve or deal with those grievances, a fragmented media landscape, and rising xenophobia and scapegoating of marginalized communities. Zaffar argued it is "within this crucible that populist leaders step in and offer simple solutions to complex problems" on both sides of the political spectrum.

To support his claims, Zaffar pointed to the growing number of populist leaders as well as the doubling of populist parties in Europe since 2000.

"Populism is not like a contagion that’s spread with a sneeze. It requires a unique formula and precise alignment of the stars and the moon in each country."

Graffy rebutted this characterization, instead arguing populism’s rise is sui generis, or unique. Populism, according to Graffy, has many causes, including economics and corruption as seen in Brazil’s case, or immigration as seen in Europe. "Populism is not like a contagion that’s spread with a sneeze," she said. "It requires a unique formula and precise alignment of the stars and the moon in each country."

To support her assertion that populism’s rise is not inevitable, Graffy provided examples of other nations that have seen an influx of immigrants without a subsequent rise of populism, such as Canada and Ireland. She argued the engaged leaders of these countries managed immigration and integration better, quelling any potential populist rumblings.

Neither Graffy nor Fly specified exactly when the fall of populism would occur, however, with Fly saying it would be "sooner rather than later." Calling populism a "mirage that fails to deliver," Fly pointed to mounting frustration of the movement’s previous supporters in Europe and the U.S., as well as what he sees as the unsustainability of the resulting "protest culture."

Fly provided three reasons for populism’s approaching demise, namely that populism leads to false saviors, short-termism, and the creation of vulnerabilities that other countries exploit. Recalling the rise of the conservative U.S. Tea Party movement, which Fly tied to the financial crisis and then-President Obama’s health care initiatives, he discussed the Republican party’s ensuing "inability to even do the basic things required of government." Fly further pointed to the U.S. government’s failure to address domestic and foreign challenges, such as Russia’s exploitation of societal divisions during the 2016 presidential election.

Parker agreed that the U.S.’ current populist leaders suffer from an inability to effectively govern or compromise, however he disagreed with Fly over the cause of both the Tea Party and Trump’s rise. According to Parker, the rise in populist leaders is connected to broader themes including gender, culture, race, and nativity.

"This does not sound like the dying gasps of populism."

Parker asked the audience to think back to populism’s historical trends, arguing that far from being sui generis, populism’s rise is often a reaction to the same phenomenon: a fear among those who benefitted from the old system that they are "losing their country." This movement towards populism, according to Parker, therefore corresponds with perceived rapid social change and the desire to "take the country back" or, as U.S. President Donald Trump says, to "Make America Great Again."

Although they disagreed about the factors and timeline of populism’s rise and fall, both sides of this debate agreed that responsible populism does not exist. Responding to an audience member’s question regarding the potential for a rise in responsible populism, Fly said that this would actually be synonymous with a functioning democracy. Parker firmly disagreed with the concept of responsible populism, arguing that populism always presents the problem of who has the power to define “the people,” a group from which marginalized communities are often excluded.

Following the debate, Pacific Council members again voted in a poll asking if populism will continue its rise. The side arguing "yes" won eight more percentage points, bringing their total to 79 percent.

"This does not sound like the dying gasps of populism," Zaffar concluded.

Mikayla Bean is a USC graduate student participating in a foreign affairs reporting class taught by Professor Phil Seib, a collaboration between the Pacific Council and the Annenberg School of Communication and Journalism.