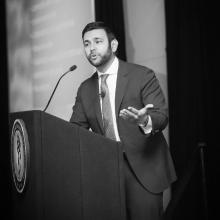 Ehsan Zaffar serves as a Senior Advisor at the Department of Homeland Security in Washington D.C. where he advises the Secretary of Homeland Security on the civil rights and civil liberties implications of existing and proposed national security policies. Mr. Zaffar worked with diverse communities and young adults in the wake of the Boston Marathon bombings and the church shooting in Charleston, South Carolina to build resilience and assist vulnerable communities as they work to counter violent extremism under the auspices of the White House’s National Strategy for Empowering Local Partners to Prevent Violent Extremism. Mr. Zaffar also leads the Department’s efforts to implement UNHRC Resolution 16/18 to combat intolerance and violence against persons on the basis of religion or belief. He has previously served as a liaison to the American Bar Association’s (ABA) Standing Committee on National Security Law and as Chair of the ABA’s Section of International Law.

Mr. Zaffar is a member of the faculties of Washington College of Law at American University, John Marshall Law School, and George Washington University. He teaches courses on homeland security policy, as well as privacy and surveillance law. He has lectured to audiences on these issues in Spain, Greece, Indonesia, Saudi Arabia, Norway, Dubai, Italy and Pakistan.

Prior to government service, Mr. Zaffar worked on human rights and rule of law issues in post-disaster and post-conflict environments both domestically and abroad. He is a panel mediator on national security and civil rights matters with the Agency for Dispute Resolution. He serves on the board of directors at Developments in Literacy (DIL) and the Amani Institute, a curriculum training institute in Kenya.

Mr. Zaffar’s writing has appeared on CNN.com, Slate, Muftah, and The Huffington Post. His book Understanding Homeland Security: Foundations of Security Policy will be published in spring 2017 by Routledge Press.

Toward a Progressive Populism
Do Syrian Refugees Really Pose a National Security Risk?