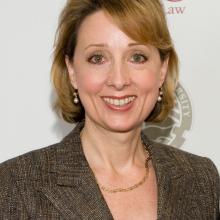 Originally from Santa Barbara, California, Professor Graffy lived and studied in Germany and the United Kingdom before becoming a law professor with Pepperdine University School of Law.  She founded Pepperdine's London Program and was based in London for over 20 years as Academic Director and Director of Global Program for Pepperdine's Law School.

Professor Graffy was appointed US Deputy Assistant Secretary of State for Public Diplomacy for Europe and Eurasia under Condoleeza Rice from 2005 to 2009. In that capacity she travelled to more than 40 countries working with US embassies and a Washington team to communicate US foreign policy, culture and values.

She created the first media hub for the US government with radio and television broadcasting facilities in Brussels and established the Ben Franklin Transatlantic Fellowship Program which brings together high school students from former Eastern bloc countries, Western Europe and the United States to study comparative constitutions and foster long-term relations among nations. She launched "Green Diplomacy" and was also the first U.S. diplomat on Twitter!

She holds a BA from Pepperdine University, an MA from Boston University and a Diploma in Law from City University and the Inns of Court School of Law, London, as well as a Master’s in Law from King’s College, London. Professor Graffy is qualified as an English Barrister and is a Bencher (a member of the governing body) of the Honourable Society of the Middle Temple in London. Her teaching includes public international law, international environmental law, international law and the use of force, legal ethics and public diplomacy.

Professor Graffy will specialise in law, environment and geopolitical issues in the United States, Europe and Eurasia.