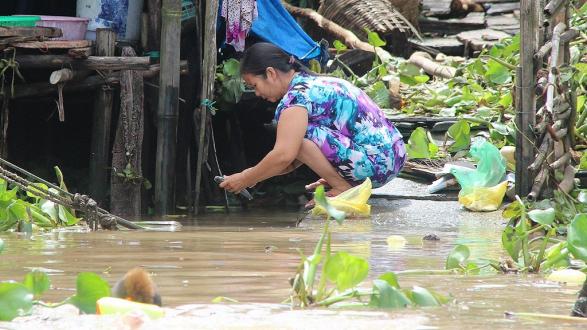 Adeel is the executive director of the Pacific Water Research Centre at Simon Fraser University. Ray is the co-director of the Berkeley Water Center at the University of California, Berkeley. The discussion was moderated by Ms. Courtney Weatherby, research analyst at the Stimson Center.

Transboundary rivers such as the Ganges, Indus, and Mekong have defined the geography, history, and culture of South and Southeast Asia for centuries and are critical to economic growth, food and energy security, and sustainable development within the region. But over the last few decades, these rivers have come under considerable pressure from industrial development, urbanization, population growth, and environmental pollution. Furthermore, poor domestic management of water resources and increasing variability in rainfall and climate patterns have made South and Southeast Asia highly susceptible to floods, droughts, and natural disasters. Water insecurity is already a daily reality for many South and Southeast Asians.

"Water security and water scarcity are completely different things," said Ray. "South Asia is water insecure in many ways, but it is not because of some actual, physical scarcity, per se. There are, of course, arid regions within some South Asian countries, but overall the region is not physically short of water resources. Therefore, we have to look at water security and insecurity in South Asia primarily as a resource management and governance problem."

"South Asia is water insecure in many ways, but it is not because of some actual, physical scarcity, per se. Therefore, we have to look at water security and insecurity in South Asia primarily as a resource management and governance problem."

Adeel added that South Asia is "one of the most water insecure regions of the world, in terms of both water availability and the impact it has on the health and well-being of its people."

"India is the dominant country in the region," said Ray. "These water issues can spill over across boundaries into transboundary conflicts and relationships. The large bulk of power that India demands makes these relationships unequal and complicates the transboundary politics enormously."

Adeel said that climate change and regional conflicts are also major concerns and factors when it comes to water insecurity.

"There are changes to the water regime taking place in the region due to climate change," said Adeel. "We have seen extreme weather events, and the forecast at the moment is that we will see a faster melting of glaciers over the next 15 to 20 years. Sea level rise is also a major concern. If we have a sea level rise of half a meter, about two feet or so, we will see about a third of Bangladesh go underwater."

"If we have a sea level rise of half a meter, about two feet or so, we will see about a third of Bangladesh go underwater."

Conflicts in and between countries such as Afghanistan, Pakistan, India, Sri Lanka, and Nepal have also made the region one of the most violent places in the world.

"Nations should think about water as one more resource to negotiate over amid multiple non-water issues such as land, conflict, and trade," said Ray. "The boundaries of their negotiations should be broadened a little more to resources and policies that go beyond water in order to not constantly see the sharing of water as a zero sum game."

Weatherby pointed out that the Mekong river is a controversial water source and a serious challenge because of tension between China and Vietnam and because many countries rely on it.

"There’s a necessity for downstream countries to broaden the scope of their negotiations with, for example, China, and not just saying, ‘Don’t build a hydropower plant, don’t build this irrigation project,’" said Weatherby. "Because without offering something in return and having a broader discussion about the context in which water plays a role in development, it can be very difficult to come to any productive conclusions."

Adeel said the international community has an important role to play in the region’s water crisis.

"The international community should serve as an honest broker that provides essentially diplomatic support for going in the direction of more regional collaboration and perhaps even de-escalating some of the conflicting positions," he said. "They should also be putting in financial investments to improve governance and management practices."

"How can we expect women to reach their full potential when the burden falls on them to make sure water is available?"

Ray pointed out that there is also a significant gender aspect to this crisis.

"Throughout South Asia, it is often the woman’s role to ensure food and water security for the family," she said. "As water access becomes more difficult because of climate change and other reasons, the burden has been on women to walk greater distances to get water, or treat the quality of water, or make do with very little water for additional domestic chores such as laundry, cooking, and cleaning, for which she is also traditionally responsible."

She added that access to safe and secure water sources affects women’s and girls’ lives much more than it tends to affects men’s and boys’ lives because of cultural and social expectations of gender roles.

"How can we expect women to reach their full potential when the burden falls on them to make sure water is available?"

The Pacific Council’s Summer Teleconference Series continues with discussions about the U.S.-Russia relationship on August 24; and Germany’s upcoming election on September 21. Read summaries of the previous discussions in the series here.

This teleconference topic was part of the Pacific Council's Global Water Scarcity Project which connects the dots between California's water scarcity challenges and international issues of trade, energy, politics, and security.