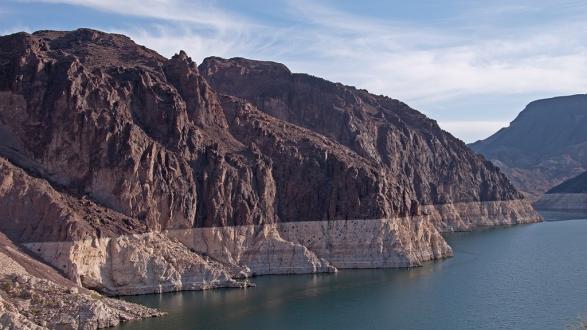 The Pacific Council will use its network-based approach to tackle the complex issue of global water scarcity, Jennifer Faust and Rachel Cardone told attendees of the Leading Together Conference in Dallas, Texas, the premier conference for the philanthropic community.

Faust is the Executive Director of the Pacific Council, where Cardone currently serves as Global Water Scarcity Project Fellow. Matt Petersen, the chief sustainability officer for the city of Los Angeles, spoke on the panel with Faust and Cardone. Shaheen Kassim-Lakha, director of international programs for the Conrad N. Hilton Foundation, moderated the session.

"How do we connect domestic issues and our domestic reality around water with international affairs? Oftentimes those things are really disconnected," said Cardone. "What we can do is build awareness and inspiration and excitement around water and related opportunities for investment, and add new thinking and disruption within the California innovation mindset. Our goal is to find an organizational voice that connects the dots between water scarcity and trade, energy, politics, and security."

Last year, the Pacific Council launched its Global Water Scarcity Project, an initiative that aims to connect California’s water scarcity issues to foreign affairs and build a case for understanding California’s international water scarcity risk. This project was made possible with support from the Conrad N. Hilton Foundation, a leader in helping the world’s vulnerable and disadvantaged communities gain access to safe water.

Through the initiative, the Pacific Council aims to contribute to foreign policy discussions and decision-making around water scarcity, with a long-term vision of helping to achieve the UN’s Sustainable Development Goals (SDGs) by 2030.

Cardone discussed some of the challenges that water scarcity presents both locally and globally.

"The growing global population—particularly in urban areas, with diets that increasingly include meat—coupled with finite and increasingly degraded naturally-fresh water sources, has led to global water scarcity issues," she said. "Of the water that is on the earth’s surface, and underground, only about one percent of it is accessible to humans. Beyond that, it starts to cost more, and people generally don’t like to pay for their water. Over the last 50 years or so, because surface water has become more polluted and scarcer in terms of volume, people are tapping into groundwater as their insurance policy to make up the difference."

"We can see that water is a threat multiplier not just at the international level in conflicts such as Syria or Yemen, but also between Northern and Southern California."

Cardone added that the implications are bigger than just people’s drinking water needs or the enormous amount of water it takes to grow food. She said that water is a threat multiplier in conflict situations.

"We can see that not just at the international level in conflicts such as Syria or Yemen, but also between Northern and Southern California, and between California and its partners on the Colorado River," she said. "There’s a policy space in thinking about water scarcity as it relates to conflict and how those can be resolved in a constructive way."

Faust explained that the Pacific Council saw a lack of leadership in this area—connecting local water scarcity issues to similar problems around the globe—and decided to take on the task.

"We’re a global policy institute with members who cut across every single field there could possibly be," she said. "If there’s someone who’s going to take the global lead on water scarcity and connect it to what’s happening in the United States and abroad, it could and should be the Pacific Council. It is a very natural issue for us. We can add value to this topic. We see the connections to what’s going on here in the United States to what’s going on abroad. We could bring incredible intellectual leadership, and we can get the ear of policymakers."

Faust said that the initial phase of the Council’s Global Water Scarcity Project involves considering questions such as: "How can California’s efforts to address water cross-pollinate with the world? Are there lessons from California that can be shared with the world, with other urban centers? And vice versa. What can California learn from the Middle East? From Israel? From Australia? From all these places around the world that are confronting a lot of the same kinds of issues in their own context."

"If there’s someone who’s going to take the global lead on water scarcity and connect it to what’s happening in the United States and abroad, it could and should be the Pacific Council."

For example, Peterson pointed out that the city of Los Angeles set a goal of 20 percent water conservation citywide, including residential, commercial, and industrial. Now the city is on its way to reduce water imports by 50 percent by 2025 and to get 50 percent of its water to be locally sourced by 2035. Since November 2014, L.A. has saved 60.5 billion gallons of water, which is enough to fill 91,700 Olympic-sized pools.

"The U.S. West talks a lot about climate change and water," Faust said. "We recognize the importance of it. We already feel it. We see the wide-ranging effects that water has in the place where we do a lot of our work. Even in California there are people who go without clean water for drinking. And often we think of that as a developing country kind of issue, yet it’s happening right here in the United States."

Cardone said that developing the Council’s Global Water Scarcity Project has been a rewarding challenge.

"The Pacific Council is a network-based organization," she said. "We wanted the strategy to be outcome-oriented but with the understanding that with networks you’re not always sure what all the outcomes are going to be. Ultimately, the best change could perhaps be somebody within the network happens to have a conversation with somebody in the Trump administration and suddenly there’s policy now. You never know how these things work out."

"Even in California there are people who go without clean water for drinking. And often we think of that as a developing country kind of issue, yet it’s happening right here in the United States."

That said, the program model aims to inspire action as quickly as possible, with an initial goal of building a strong network culture.

"It’s really about catalyzing a network of members who have professional lives of their own and are leaders in the Los Angeles area and along the West Coast, and who are passionate about international affairs," said Cardone. "The Pacific Council works as a resource broker and incubator, pulling together compelling programming for those networks to then be the actors through their networks. We want to connect their personal experience with California’s drought to international policy."

The process of building the project’s strategy was interactive. Pacific Council focus groups met in Los Angeles, San Francisco, Seattle, and Silicon Valley to share ideas. Experts from a variety of institutions in Washington, D.C., and around the world—including many at World Water Week in Stockholm, Sweden—provided feedback on the project. A steering committee guided the creation of a multi-year strategy; its members included representatives from the private sector, NGOs, government, water utility boards, the military, and more.

"The Pacific Council is a network with a cross-section of expertise in our membership from every walk of life, from the private sector to current government to future government to younger members," said Faust. "Millennials are the kind of people who want to be involved in community-building. They are values-driven and they have ambition. They’re going to be the army for these kinds of issues for tomorrow. We’re looking at a network-based solution for this big, complex, interconnected systems problem."