Women and Girls are Key to National Security 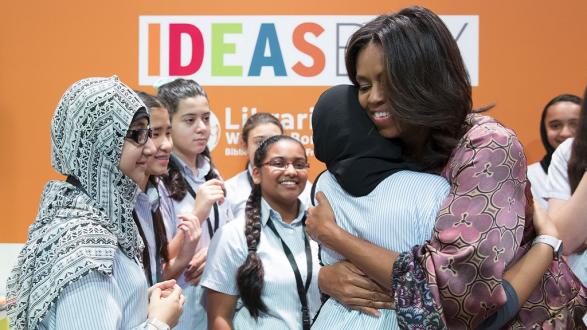 There is a growing body of knowledge about the nexus between gender equality, economic growth, and political stability. Studies by government agencies, multilateral institutions, and private sector entities have confirmed that investing in gender equity, often in the form of funding for programs and initiatives that focus on empowering women and girls, yields broad dividends for economies and societies around the world.

It is unclear whether and how the Trump administration will prioritize funding for gender-specific programs which have received varying investments and attention in prior administrations; however, the empowerment of women and girls around the world must remain a central and core pillar of our nation’s national security agenda.

There is compelling evidence that a link exists between a society’s treatment of women and its overall security and prosperity. Gender equality has, in the past, been viewed in the traditional national security paradigm as a zero-sum investment, and demonstrated benefits resulting from gender equality were considered as merely ancillary, as opposed to directly associated with a society’s strategic national security approach. However, strong evidence demonstrates that a more prosperous society and a more stable world results when women and girls are empowered; have access to services, education, and capital; and are otherwise afforded opportunities to fully participate in their societies.

Whether we reference a McKinsey & Company report revealing the economic implications of gender equity and how women’s equality can add $12 trillion to the global economy; the Organization of Economic Coordination and Development’s report about gender equality’s impact on sustainable development; or the United Nations’ research linking war and conflict with women’s rights that resulted in UN Resolution 1325 on Women, Peace, and Security, all signs point to the fact that, as a matter of strategy and returns, investments in gender equality and women’s rights are not making dents in a vacuum and are worth every dollar spent.

As a matter of strategy and returns, investments in gender equality and women’s rights are not making dents in a vacuum and are worth every dollar spent.

These results, in part, informed the Obama administration’s approach to its national security strategy. The State Department and other agencies during the Obama years integrated international women’s issues into the U.S. government’s national security framework. The advancement of women and girls and gender equality were not considered separate and apart from decisions about how the administration was going to combat ISIL, the threat of climate change, and other foreign policy priorities at that time. Indeed, tackling extreme poverty and violent extremism in the form of Boko Haram or ISIL, reducing child and maternal health mortality rates, and investing in programs that create stronger economies and reducing the incidents of conflict were viewed as a matter of national security.

The government based these decisions on a common understanding that programs addressing gender equality were essential to chip away at the root of many global security challenges of the 21st century. Former President Obama stated last year at the United State of Women Summit that societies that oppress half the population will not reach their full potential. "This is a national security issue," he said in his remarks. "As commander-in-chief, I’ve seen how the ideology that leads Boko Haram to kidnap schoolgirls and leads ISIL to enslave and rape women is the same ideology that leads to instability, violence, and terrorism."

This approach was reflected in various Obama administration programs, strategic documents, and policy initiatives, including the 2010 legislatively mandated National Security Strategy, the Presidential Policy Directive on Global Development, and a Presidential Memorandum which positioned gender equality and the advancement of women and girls as "vital to achieving our overall foreign policy objectives."

The White House Council on Women and Girls, along with other federal agencies, was instrumental in ensuring that gender issues were mainstreamed throughout the policy-making process across the federal government. Institutionalizing and integrating these women-focused efforts as part of the national security structure during the administration were key to elevating these issues beyond what has traditionally been considered "soft" or "special interest" projects, and ensuring effective interagency coordination and implementation of these efforts to advance women and girls’ issues globally.

The advancement of women and girls and gender equality were not considered separate and apart from decisions about how the Obama administration was going to combat ISIL, the threat of climate change, and other foreign policy priorities at that time. They were viewed as a matter of national security.

In addition to efforts to embed these programs and structures in the governmental DNA, gender equality initiatives were a clear priority for U.S. Secretary of State Hillary Clinton, who has long-championed these views; former U.S. Ambassador to the UN Samantha Power; First Lady Michelle Obama, who launched the "Let Girls Learn" girls’ education program; and former Senior Advisor to the President and Chair of the White House Council on Women and Girls Valerie Jarrett. Moreover, countless administration officials across the government traveled and organized visits for U.S. officials to meet with women all over the world to discuss the challenges and opportunities they encountered in their own societies.

While it may be tempting for some to categorize these programmatic and structural efforts as falling in the "nice to do" box because they were the "right thing to do" (which they were), they were part of a broader strategic approach to national security.

Of course, the Obama administration was not the first to prioritize these issues, and none of the aforementioned efforts operating alone will suffice to realize a fully comprehensive and effective strategy to integrate international women’s issues into the national security infrastructure. Taken together, however, these efforts can establish a durable structural and policy foundation that can become part of the fabric of our development and diplomatic agenda.

Seven months into the current administration, much remains unknown about whether global women’s issues will remain a high priority. Secretary of State Rex Tillerson stated in his confirmation hearing that "when you empower women, you change the future of the country because you change the cycle of that family…These are extraordinarily powerful programs and an important part of foreign aid." On the other hand, the Office of Global Women’s Issues currently is without a director or ambassador and the 2018 federal budget reportedly plans to eliminate funding for the office.

Integrating women’s issues is not only a moral imperative, but an economic, political, and security one. What’s more, our collective global security demands it.

To be sure, the primacy of global women’s issues has been a challenge for many administrations and much work remains to be done to thwart the tendency to sideline these issues and position them on the outside of a strategic national security focus. Even when there are shared views and general agreement about an approach, the process may not be a smooth one. After all, it takes time for the implementation of programs and initiatives to take root, and the process is most often not a linear one through successive U.S. presidential administrations.

Admittedly, it is too soon to draw any firm conclusions regarding the current administration’s views on the relationship between gender equity and national security. At this time, however, there remains an opportunity for the United States to lead on this issue along with our allies (e.g. Germany) who are making great gains in this area, and to complement the work that is being done in the multilateral, NGO, and private sector arenas.

As has been noted for many years, integrating women’s issues is not only a moral imperative, but an economic, political, and security one. What’s more, our collective global security demands it.

Karen Richardson is a Pacific Council member and served as a deputy assistant secretary of the Bureau of Public Affairs at the U.S. State Department and as a White House advisor.