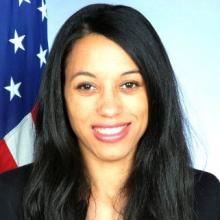 Karen Richardson formerly served as Deputy Assistant Secretary in the Bureau of Public Affairs at the U.S. State Department. From January 2009 to February 2014, she worked at the White House as Associate Director in the Office of Public Engagement and Intergovernmental Affairs. In this role, she was responsible for developing and managing domestic outreach to NGOs, advocacy organizations, and constituency groups, in close coordination with the White House National Security Staff, to promote the President’s position on a broad range of foreign policy issues. In this capacity, Richardson was also an advisor to Senior Advisor Valerie Jarrett on international issues, including managing Ms. Jarrett’s involvement in international gender policy development in her role as Chair of the White House Council on Women and Girls.