Iran Deal Withdrawal was a Mistake Based on Misunderstanding 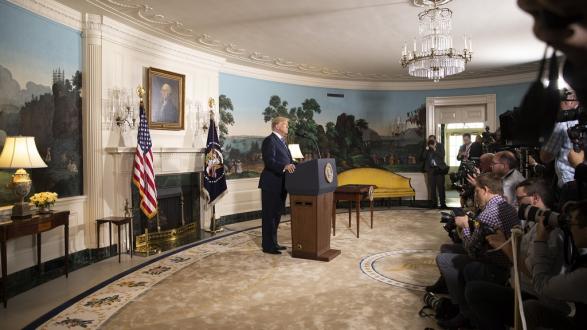 Perhaps the writing was on the wall from the very beginning: President Trump had given almost every indication that he would withdraw the United States from the Joint Comprehensive Plan of Action (JCPOA), more commonly known as the Iran nuclear deal. After all, candidate Trump promised to "rip up" the agreement, labeling it a "disaster" and, more recently, "one of the worst deals I’ve ever witnessed."

Therefore, it came as little surprise when President Trump decided to withdraw the United States from the Iran deal, putting at potentially catastrophic risk the interests of the United States and the American people. This decision came ahead of the May 12 deadline for the president to formally decide whether to renew a 120-day sanctions waiver, and in light of the president’s announcement, the Trump administration will, instead, re-impose nuclear sanctions.

The president cited a few reasons for withdrawing the United States from a multinational arms control agreement that was working, including: It failed to protect the national interests of the United States; it allowed Iran to continue enriching uranium; and the deal gave the Iranian regime too much in exchange for little in return. If true, these stated reasons might inspire confidence that the decision was arrived at based on solid factual understandings. The reasons put forth by the administration, however, reflect a fundamental misunderstanding of the agreement and woefully neglect a few salient facts.

The president has consistently referred to the agreement as one-sided, but the JCPOA was a multinational agreement that was reached not only between the Obama administration and Iran, but through diplomatic efforts among the United Kingdom, France, Germany, the European Union, Russia, China, and Iran.

First, the president’s statement that the deal, as implemented, allowed Iran to continue enriching uranium and reach the brink of a "nuclear breakout" flies in the face of the facts. The facts are that, so far, 17,000 centrifuges and 95 percent of Iran’s highly enriched uranium stockpile have been removed and Iran’s only plutonium reactor was disabled. Essentially, the deal was working, and the International Atomic Energy Agency (IAEA) confirmed most recently in March 2018 that Iran has remained compliant.

As others have pointed out, many leaders in the intelligence agencies and Defense Department have indicated that Iran, while upholding its commitments laid out in the agreement, has significantly increased the transparency of its nuclear program. And though the president pointed to what he views are inadequate inspection mechanisms in the verification process, international monitors have access to Iran’s entire nuclear supply chain, from the mines to the laboratories.

Iran’s compliance with the JCPOA as a condition to the United States remaining in the agreement was also underscored by the president’s own Defense Secretary James Mattis at a Senate hearing in October 2017. At that time, Mattis stated, "If we can confirm that Iran is living by the agreement, if we can determine that this is in our best interest, then clearly we should stay with it." The president has also consistently referred to the agreement as one-sided, but the JCPOA was a multinational agreement that was reached not only between the Obama administration and Iran, but through diplomatic efforts among the United Kingdom, France, Germany, the European Union, Russia, China, and Iran.

The deal was already working to prevent a nuclear weapon in Iran, and now without the deal in place, the United States risks triggering a nuclear arms race in the Middle East.

In addition, the president has argued that upending JCPOA will put the United States on a path to ensure that Iran doesn’t acquire a nuclear weapon. Yet, as aforementioned, the deal was already working to prevent a nuclear weapon in Iran, and now without the deal in place, the United States risks triggering a nuclear arms race in the Middle East, alienates our allies, and undermines U.S. credibility and standing on the world stage. These consequences are particularly debilitating in view of President Trump’s impending meeting with North Korean leader Kim Jong-un, who may utilize this moment as an opportunity to exploit the seeming unsteady hand of the United States.

As the saying goes, "facts are stubborn things," which seems appropriate in the current context. While there may be plausible arguments that support the view that withdrawing from the JCPOA was in the national security interest of the United States, the reasons delineated by the current administration fail to convince that sound judgment based on discernible facts went into this decision. It more likely reflects an unsubstantiated view that the president has posited long before he entered office.

Karen Richardson is a Pacific Council member and served as an advisor in the Obama administration, including at the White House and U.S. Department of State.