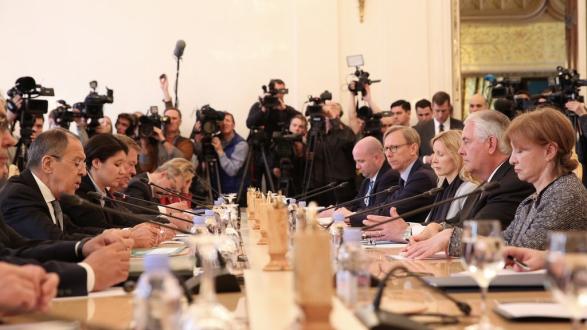 This article is Part Two in a three-part series about Russia’s challenge to the liberal world order by Sharyl Cross. Read Part One here and Part Three here.
____________________

In conjunction with the introduction of reforms culminating in the dismantling of the Soviet empire and Russia’s stated intention to pursue democratization, developing a free market economy, and integration with the West, Moscow’s leadership also expected that Russia and the United States would share a relationship of co-equals or co-hegemons in the international community. Instead, Russia suffered as a result of diminished power, status, and influence confronting realities of the NATO war in Kosovo, NATO enlargement, and more.

Moscow wants to play the role of a major world power or "great power" with consequential influence not only in regional, but also global security. Russia’s leadership seeks respect from the United States and recognition that it is more than a "regional power." Russia’s role in Syria demonstrated Moscow’s capability for projecting force beyond the immediate Eurasian neighborhood and serves as evidence of Russia’s intention to re-assert global presence and influence.

The Kremlin leadership seeks an independent role in world politics, and together with China shares the desire to resist what they deem as U.S. hegemonic influence in the contemporary world order.

Moscow can be expected to continue to behave toward neighbors (Ukraine, Georgia, and others) with a sense of entitlement. Putin and his colleagues are not seeking to restore the borders of the Soviet empire, but they will resist perceived challenges to Russia’s interests and influence among the so-called "near abroad" or Russia’s "zone of privileged interests."

Despite the benefits for security and economic growth that might have resulted from Russia’s full integration in Western institutions, Moscow could not accept membership in NATO and other Western decision making forums where the United States was perceived as the leading or dominant power. Russian officials repeatedly expressed opposition to assuming any "Junior Partner" role in NATO and were often dissatisfied with anything less than exercising veto authority in joint deliberations with NATO partners involving several member nations considered to hold lesser status and influence in European and global security.

The Kremlin leadership seeks an independent role in world politics, and together with China shares the desire to resist what they deem as U.S. hegemonic influence in the contemporary world order. Putin and his colleagues believe that U.S. influence must be balanced by other major powers in the world and Moscow desires a significant voice in defining the rules of the world order. Russia has demonstrated increasing resolve and willingness to undertake substantial risk in challenging the United States and the rules and norms of the liberal world order and Western security community.

Putin and his colleagues clearly reject any sense of America’s moral superiority or exceptionalism.

Vladimir Putin restored Russia’s national heritage with Orthodoxy and patriotism as foundations for defining Russia’s identity and establishing an independent pillar in the world community. The Kremlin leadership sees the Russian state as the center of the "Russian world," the Third Rome or the spiritual civilization of Eastern Orthodox Christianity. Moscow claims to uphold Christian values and tradition as a means of countering the value system of Western nations and the Euro-Atlantic community which they frequently characterize as decadent and immoral. Putin and his colleagues clearly reject any sense of America’s moral superiority or exceptionalism.

Putin has established the power of the state and security of the state as a first order priority. U.S./Western involvement in the "colored revolutions," promoting democratization or instigation of regime change has been described in Moscow (and Beijing) as leading to chaos and suffering in targeted societies representing a potential threat to security and stability of the Russian state. The Arab Spring contagion intensified this concern and resistance to any perceived encroachments on the part of the West that could potentially undermine state sovereignty and security.

Moscow’s assessments of regional conflicts differ significantly with views in the West. For the United States and Western allies, Russia’s intervention in Ukraine and annexation of Crimea disrupted the rules, norms, and stability of the entire established security order in Europe, while Moscow (and Beijing) characterized the Euro-Maidan movement toppling the existing sovereign pro-Russian government of Viktor Yanukovych as instigated by Western powers.

Putin still seeks partnership with the United States, but only on the basis perceived as equal terms and consistent with advancing Russia’s interests.

At the same time, Moscow would like to restore the relationship with the United States and the West. It is important to recognize that Russia’s leadership is also pragmatic. Even given the obvious differences in values and interests, Putin still seeks partnership with the United States, but only on the basis perceived as equal terms and consistent with advancing Russia’s interests. Russia’s interests will be defined by the Kremlin leadership in Moscow, not in Washington.

Cooperation and achievements in the bilateral relationship with the United States, still the most powerful nation in the world, would reinforce the image Moscow seeks to project as a major player on the world stage. Economic relationships with Western nations are also important for Russia’s future economic growth and development. Russia’s pivot to Asia and cultivating economic ties with the BRICS and other non-western nations is not sufficient to replace the West, at least not in the near term.

Dr. Sharyl Cross is the director of the Kozmetsky Center at St. Edward’s University and the Austin and Global Policy Fellow at the Woodrow Wilson International Center for Scholars' Kennan Institute for Advanced Russian Studies. She participated on the Decoding Russia's Geopolitical Ambitions panel at Members Weekend 2017.