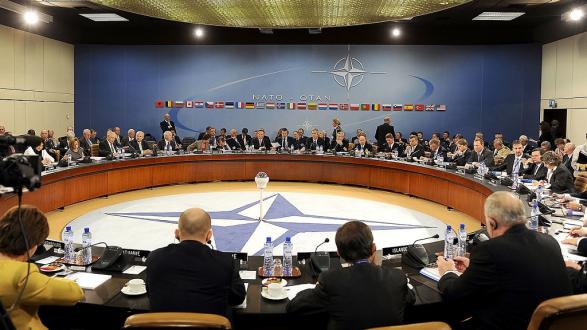 This article is Part Three in a three-part series about Russia’s challenge to the liberal world order by Sharyl Cross. Read Part One here and Part Two here.
____________________

One major lesson over the past three decades since the declared end of the Cold War is that nations have not been able to move beyond the divided contentious East-West frame of reference. Instead, in many respects, we remain locked in a zero-sum competition. Nations of Eastern Europe, the Balkans, and Eurasia have been placed in a position to have to choose between moving closer to the West or maintaining allegiance in the East.

The fact is that any of these countries can only thrive by developing closer integration with both the Western security and economic communities and Eastern partners, to include not only Russia, but increasingly also China. Those officials on both sides of the Atlantic that have continued to perpetuate narratives of East-West zero-sum conflict can now witness the detrimental consequences of this perspective in the difficult situations today in Georgia, Ukraine, Moldova, and elsewhere.

Further, the Cold War East-West mindset and imagery will not be suitable for meeting the vast, daunting, and complex transnational security challenges of the 21st century. We simply can’t continue to employ a restricted vision and set of assumptions relevant to the past expecting to be equipped to respond effectively to emerging threats and challenges requiring unprecedented levels of cooperation coordinated by robust networks among partner nations.

Russia’s interests will have to be taken into account in resolving tensions and dealing with frozen conflicts in the Eurasian space.

Russia’s interests will have to be taken into account in resolving tensions and dealing with frozen conflicts in the Eurasian space. Moscow should be assured that NATO membership for Ukraine, Georgia, and Moldova is not on the horizon, but that NATO nations must seek to foster practical security cooperation with Russia and its neighbors in addressing issues of common concern. The United States will have to consider how they will manage cooperation or competition with future Russian and Chinese influence in the Eurasian space taking account of Sino-Russian collaboration in supporting Beijing’s ambitious "Belt and Road" economic initiative.

The United States should seek to establish a broad-ranging bilateral security agenda with Russia. In the past, both sides made mistakes in placing priority on single issues such as suggesting for example that reaching agreement on missile defense would be a "game changer" in the U.S.-Russian relationship. Both the United States and Russia would be well served to agree not to allow conflict over any single issue (missile defense, Crimea) to derail progress on reaching cooperative agreements in other vital areas.

It is important to recognize that differences will exist in U.S.-Russian geostrategic interests. Putin can’t afford to be perceived as compromising Russia’s vital interests with the West. The obsessive focus on demonization of the persona of Vladimir Putin in the West has not been helpful. Putin is a reflection of Russia’s society, national identity, and interests. We should anticipate that policy is most likely to be formed on a transactional basis taking account of pragmatic assessment of interests and willingness to cooperate when mutually beneficial. Based on experiences reinforced in the recent past, Moscow is not likely to be open to sacrificing vital interests to achieve favor with the United States.

Moscow’s concern with seeking validation of great power status from the United States has also arguably been a significant impediment to advancing the U.S.-Russian bilateral relationship.

Moscow’s concern with seeking validation of great power status from the United States and other Western powers has also arguably been a significant impediment to advancing Russia’s interests and the U.S.-Russian bilateral relationship. Russia’s claims to holding great power status in the world community together with the United States and China will require more on several levels than being a military, energy, or geographic resource power. Diversification of Russia’s economy will be essential and ties with the West will be valuable in fueling Russia’s further economic development, growth, and improved standard of living of Russia’s population.

President Trump’s intention to move away from championing democracy promotion and regime change may create some potential for reducing tensions between the United States and Russia, but the behavior and policies of the Trump administration are still unpredictable and any expectations for Trump heralding in a new era of significantly improved relations with Russia has been dampened particularly in face of allegations of Moscow’s meddling in the 2016 election.

In April 2017, the Kozmetsky Center hosted a conference gathering of American, Russian, and European experts in cooperation with the Moscow State Institute of International Relations (MGIMO) to discuss "Russia and the West." Participants from Russia shared a consensus view that there is an urgent need to establish clear understanding of the new rules for managing our relationship. They warned that the current period of uncertainty is dangerous entailing a high degree of risk.

It will be critical to maintain communication and collaboration at all levels of our societies, particularly during this period of high tension with Russia.

Participants emphasized the threat posed by recent near-miss clashes in the air and sea between Russia and the West stressing that maintaining sustained military-to-military channels of communication was imperative to avoid misperception, miscalculation, or potential kinetic clashes over the Black Sea, Mediterranean, or Baltics that could escalate into serious confrontation. Concerns were expressed regarding periodic suspensions of military-to-military communication and disruption in routine consultations through existing channels such as the NATO-Russia Council.

It will be critical to maintain communication and collaboration at all levels of our societies, particularly during this period of high tension with Russia. The decades of open exchange between Russia and the West makes it unlikely if not impossible to return to isolation with little or no interaction. Dialogue at all levels is critical, not something to resist or thwart as a means of punishment.

The strength of the transatlantic security community and U.S. relationships with its allies in Europe will remain essential to managing the U.S. bilateral relationship with Russia. We should realize that there can be no long-term security and stability in Europe without Russia’s support. At the same time, Russia will seek to exploit differences among the Western alliance. Measures should be pursued at all levels to return to fostering a united European security community inclusive of Russia, and every effort should be made on the part of responsible leadership on all sides to avoid deterioration of the European security and geopolitical environment further pitting Moscow against the West.

U.S. policy makers will not be able to place a wedge in the Sino-Russian relationship to advance American interests as in the Kissinger era.

Although Russia and China are not yet full-scale declared allies, the Sino-Russian strategic partnership has advanced so far that the United States can’t expect to engage China against Russia or to partner with Russia to curb Beijing’s growing influence. U.S. policy makers will not be able to place a wedge in the Sino-Russian relationship to advance American interests as in the Kissinger era. In addition, the United States should be careful not to drive China and Russia closer, but rather seek to enlist both these major powers in managing shared transnational security challenges on a trilateral basis.

Finally, it certainly doesn’t serve U.S. interests to concede that Russia could have sufficient capability to have disrupted or decisively influenced our presidential election outcome. We should take it as a given that Russia and other nations will seek to exploit the information space to strike strategic advantage and adapt measures to counter such threats. The current investigations underway in the United States on Russia’s role in the 2016 election are important and hopefully will yield recommendations on instituting enhanced safeguards for ensuring the integrity of the democratic process in an environment of the massive unregulated plethora of available information and cyber vulnerability.

Serious strategic challenges remain ahead in managing the U.S.-Russian relationship. Differences over the liberal world order and U.S. influence in Western security and economic structures, tensions over NATO and Russia’s relationships with neighbors, and inevitable problems resulting from the Trump administration’s disengagement from the “deal” to curb Iran’s nuclear development are only a few of the major issues. Even in those areas where there is a considerable overlap of interests, differences remain in terms of priorities and perspectives on combating terrorism, resolving the Syrian crisis, and containing North Korea.

The United States might be well served by undertaking a comprehensive reassessment of U.S. vital interests with respect to Russia at this juncture.

Despite President Trump’s favorable words for Vladimir Putin’s leadership, there is no guarantee that these two strong-men leaders will be able to get along even in circumstances where Donald Trump was not so constrained on the domestic front. Again, overcoming mutual negative perceptions and the lack of trust are serious issues. However, one would hope that the vast range of mutual shared interests that enabled the United States and Russia to manage the bilateral relationship in the decades of the Cold War would similarly motivate the two nations to continue to strive to work together in the interest of protecting national security in the current world security environment, presenting equally daunting or even more serious security threats and challenges.

The United States might be well served by undertaking a comprehensive reassessment of U.S. vital interests with respect to Russia at this juncture. We should also consider conducting joint threat appraisals together with the Russians to further define and explore areas of disagreement as well as shared interests.

It is important to limit expectations as there is not likely to be any major reversal of the current state of U.S.-Russian strains in the near term, but we should take all necessary measures on both sides to prevent further deterioration of the bilateral relationship or pursuing actions that could lead to rapid or unintended escalation of conflict. Building practical areas of cooperation and keeping channels of communication open at all levels will be important to resuming productive engagement.

Regrettably, our relationship with Russia hasn’t been what those wise and well-intentioned statesmen who brought the end to the Cold War might have hoped. However, we don’t have to be "friends" or even "partners." Both sides would be well served by taking a realistic approach anticipating differences and setbacks in the relationship while simultaneously remaining committed over the long-term to work through the difficult challenges in the context of a larger bilateral and multilateral security agenda recognizing that none of our societies will benefit by remaining in a perpetual state of high tension and conflict.
____________________

Dr. Sharyl Cross is the director of the Kozmetsky Center at St. Edward’s University and the Austin and Global Policy Fellow at the Woodrow Wilson International Center for Scholars' Kennan Institute for Advanced Russian Studies. She participated on the "Decoding Russia's Geopolitical Ambitions" panel at Members Weekend 2017.