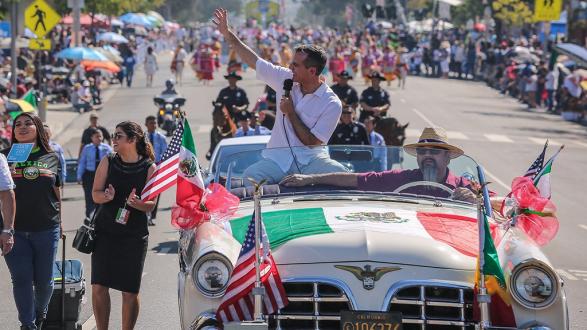 As part of its Mexico Initiative, the Pacific Council has partnered with the city of Los Angeles and the Mexican consulate on "The Year of Mexico in Los Angeles" (MXLA2017), a program celebrating the important relationship between L.A. and Mexico.

"Los Angeles' Mexican roots run deep: Our city is home to more people of Mexican descent than any city in the world outside of Mexico," said Los Angeles Mayor Eric Garcetti in launching the MXLA2017 program. "From Boyle Heights to Pacoima, San Pedro to Reseda, and everywhere in between—Mexico’s impact on L.A.’s history, art, culture, and cuisine cannot be overstated. That’s why I’m honored to declare 2017 the ‘Year of Mexico in Los Angeles’—an initiative that will inspire and educate Angelenos and the tens of millions of people from around the world who visit L.A. each year."

Of the 10.1 million people who live in Los Angeles County, 3.7 million are of Mexican descent and 1.4 million of them were born in Mexico, making L.A. the biggest concentration of Mexicans in the United States. Additionally, deep historical and cultural links tie the Mexican population with the city of Los Angeles.

"Mexico and Los Angeles share a past characterized by closeness, great likeness, and profound friendship," said Mexican Consul General Carlos García de Alba. "A past that has significantly contributed to the fact that today, both parts maintain a relationship of vast richness and diversity, ranging from a $15 billion yearly commercial exchange, to the multiple and prolific daily interactions that exist in fields as varied as education, culture, art, tourism, sports, gastronomy, science, and technology, to name a few."

"Los Angeles' Mexican roots run deep: Our city is home to more people of Mexican descent than any city in the world outside of Mexico."

A Pacific Council delegation recently traveled to Mexico City to explore U.S.-Mexico relations and major policy challenges. The visit was a key component of the Council’s Mexico Initiative, which includes events, analysis and commentary, and fostering exchanges with Mexican leaders.

"The United States and Mexico enjoy one of the most interdependent, successful economic partnerships in the world, and their populations share deep cultural, linguistic, and often familial ties," said Pacific Council director Michael C. Camuñez, chair of the Pacific Council’s Mexico Initiative. "Nowhere is that more apparent than in Los Angeles."

Learn more about MXLA2017 and the Pacific Council’s Mexico Initiative.